Can I add custom action to other actions and for it to be searchable and have a custom name?

I want to add an action 'if button' that would be searchable here :

And the action would create this :

Can I do this? Thank you.

I can think of 3 ways to create a custom Action:

Here's my macro. It's actually not just one macro, but a Macro Group with a palette, and then one macro for each custom Action.

So I trigger the palette with ^⌥A, and then each Macro in the palette has a simple (one-letter in most cases) hotkey (like "G" for "Group Action"). 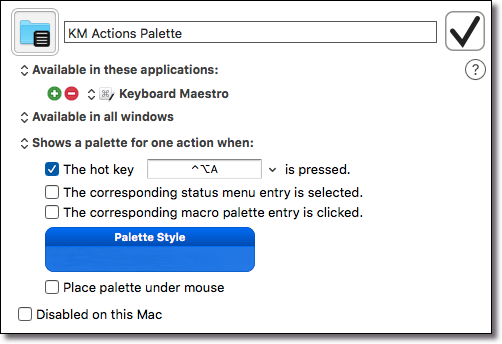 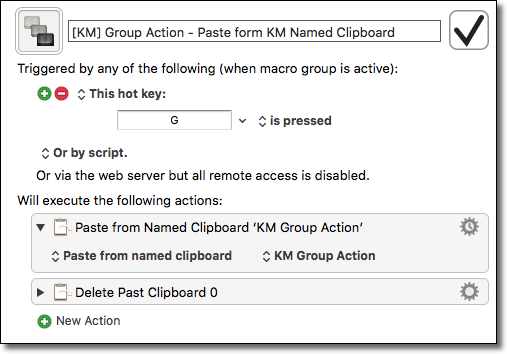 I’ve been thinking of trying out palettes, can’t really find use cases for it though right now.

So there is no way to easily add my custom action to the action database?

From the three solutions above, the first takes too much time for me. The second one seems most interesting but I am not really sure I get how to do it. I have to copy my action into named clipboard and then call that clipboard whenever I want to use the action?

And for three, how would I create hat plugin? I really wish Peter would add a way for users to add custom actions to actions database, this would be amazing.

So there is no way to easily add my custom action to the action database?

I’ve been working on something for this for quite a while. I’ve been hoping to dot every “T” and cross evern “I” (or something like that) before I released it, but I guess I’m just putting off the inevitable.

I’ll put together some documentation today, and publish it. It really needs a demo video, so I’ll probably half-ass something today, then try to clean it up later. Assuming no huge setbacks, look for it in the next 24 hours.

By the way, a plugin won’t really do what you want. I know it sounds like it will, but not really.

##MACRO: [KMFAM] Favorite Actions and Macros ###Requires OS/X Yosemite or later. KMFAM Macros Installer.v1.1.zip (527.1 KB) ##Create a library of your favorite actions... ...customized just how you like them, and insert them with a couple of keystrokes. Add new favorite actions with ease, and add custom keywords to make searching for them a snap. Rather that waste any more words, please see this Demo/Tutorial video: