Can someone please explain how to use the Cancel a Specific Macro Action?

After reading the wiki section on the %ExecutingInstance% section (https://wiki.keyboardmaestro.com/token/ExecutingInstance), I'm guessing I'm overthinking what information or Format to place in the Instance area. I've tried the macro name, the UUID, etc. I'm stuck.

My simple macro is:

I'm fine with being embarrassed that I couldn't figure it out. I'll take the L on this one. I just can't figure out what to put in that instance section.

Thanks for your time.

Can someone please explain how to use the Cancel a Specific Macro Action?

You can't cancel Actions -- only Macros.

If you want to cancel your macro after a specific Action completes, then just insert the Cancel this Macro action.

Hmm... I didn't ask about canceling the action. I'm asking about the usage of the new Cancel a Specific Macro Action (see above Screen shot) that was introduced in v9.0.

My issue is specifically this new area --

I can't use the Cancel This Macro action for another action that is running.

So -- if I can't the new Cancel a Specific Macro Action for the purpose of cancelling another Macro, can you explain what this action does?

Sorry, I misunderstood your question.

The use of this Action is also unclear to me. We will have to wait for @peternlewis to enlighten us.

You can get an opaque string representing the executing instance of a specific macro instance - that is, each time a macro starts executing, that is a new instance (which also corresponds to a new set of Instance Variables) - by using the ExecutingInstance token.

If you squirrel that away somewhere, then another macro can use it to interact with that specific instance. In particular it can use the Cancel a Specific Macro action to cancel it. 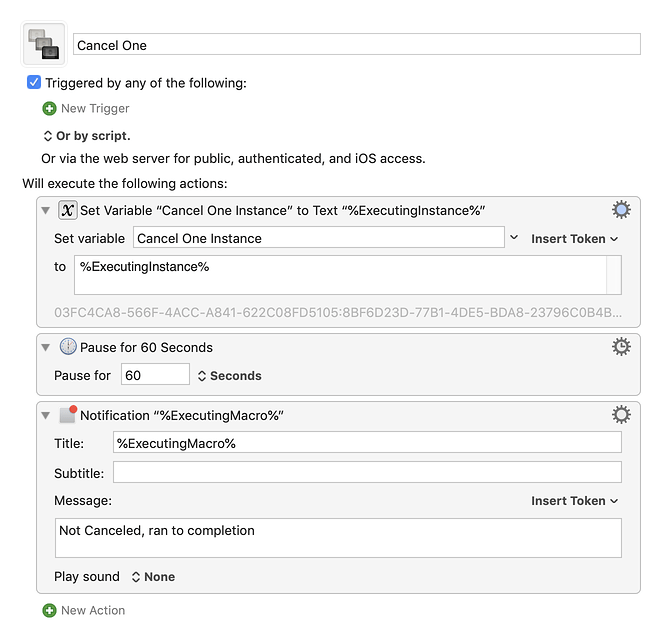 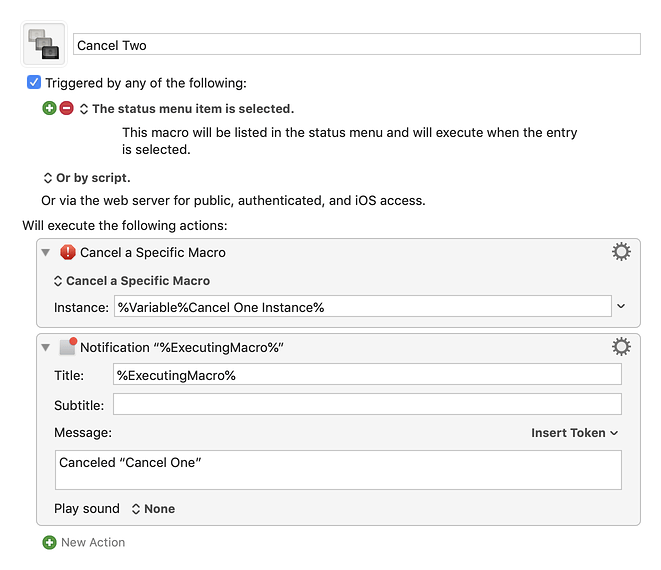 Thank You, Thank You!

I was so close, yet so far. Bookmarked for future reference.

It seems that Keyboard Maestro 10.0.2 does not (yet?) invoke "Catch" clauses in a macro instance which gets cancelled by means of "Cancel a Specific Macro", i.e. the macro instance appears to simply be killed off. Is this a bug or intended behavior (or even a wrong observation on my own part)?

It seems that Keyboard Maestro 10.0.2 does not (yet?) invoke "Catch" clauses in a macro instance which gets cancelled

You should be a product tester, because that's a good observation. I never would have even thought to test that.

However I'm not sure I agree with your desired behavior. If the catch clause wasn't cancelled, then the macro hasn't actually been (completely) cancelled.

I think your intention is for the macro to be cancelled at the end of the catch clause, but before the next action occurs. However I don't think that makes sense because if the macro isn't cancelled, then the action after the catch clause IS executed.

I see your point, that it might be useful your way, but I can also see how it could be useful the way it currently works. I suspect it would be a lot more work (for PeterNLewis) to handle the situation the way you are proposing. So unless you can make a really good argument for it, I suspect you won't get it to work that way.

However I'm not sure I agree with your desired behavior. If the catch clause wasn't cancelled, then the macro hasn't actually been (completely) cancelled.

Thank you very much for your thoughtful and insightful reply!

In fact I am not sure what the "desirable behavior" should be in this case; I have just started experimenting with some more advanced features of Keyboard Maestro and wanted to find out more about try and catch.

My expectation was like "whenever a macro would normally terminate while executing the try block, it would instead continue executing the catch block", but this was not the case.

But perhaps rightly so, as the documentation page states:

The Try/Catch action (v10.0+) allows you to execute a sequence of actions and catch any failure. If any action in the Try sequence would abort the macro, the macro instead continues executing the Catch section

The bold emphasis is mine, it indicates that "external events" like the invocation of the "Cancel a Specific Macro" action somewhere else, do not cause this effect. So the current behavior matches the docs (and perhaps indeed by intention).

So the current behavior matches the docs (and perhaps indeed by intention).

The catch actions will be run (and the macro continue from there) if an action within the Try section would otherwise cause the macro to abort.

But an external factor that aborts the macro will not be caught. Such a catch would be too dangerous in general.

But an external factor that aborts the macro will not be caught. Such a catch would be too dangerous in general.