Sorry, its not working. Am I doing something wrong? 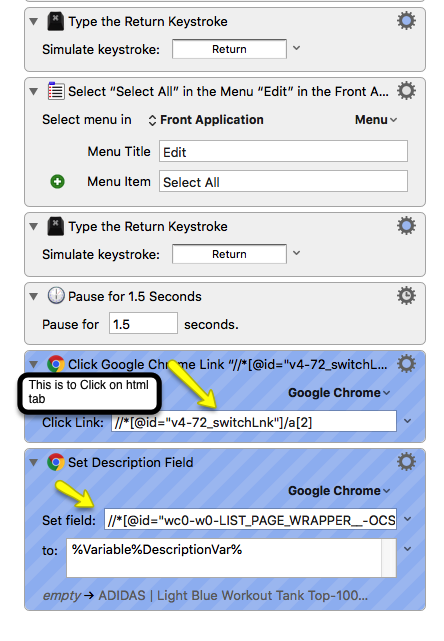 Mercari is working pretty good, but when it pastes into the Title and Description, Mercari does not pick it up that any charaters were added. 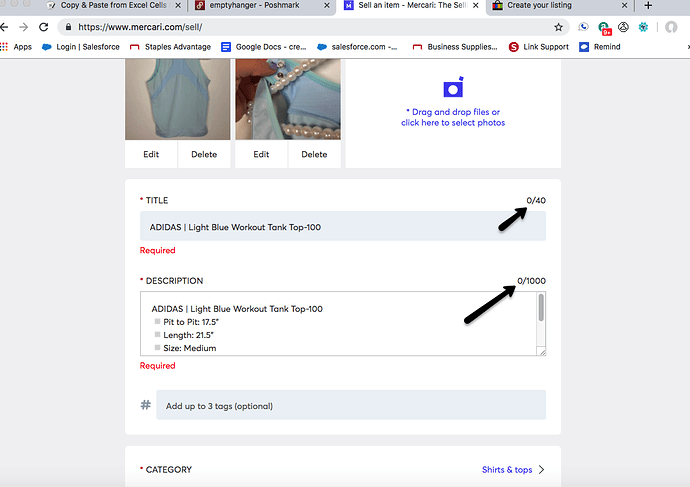 No, you're not doing anything wrong; eBay is behaving strangely. For whatever reason, the selling forms you and I are looking at don't appear to be the same: 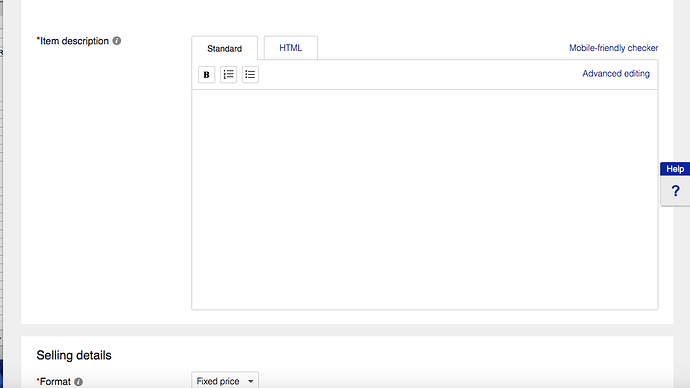 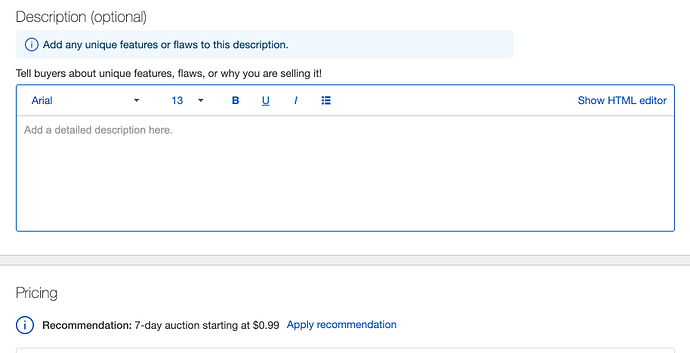 As further evidence of that, the Xpath I get for switching between the standard and HTML editors is very different from yours:

This leads me to believe that although the Xpath I gave you for eBay's description field works for me, it won't work for you, so you'll need to find the right Xpath for the page eBay is showing you. Fortunately, I think you should be able to do so in the same way I showed you before once you switch it over to its HTML editor version.

As for Mercari, I'm afraid I don't know enough about JavaScript to know how to force it to update its character counter, but I can think of a workaround (note that I used the Poshmark title field Xpath for this, so you'll need to update it with Mercari's):

Is there a way to insert the Set Fields by "Typing"? I think that is the problem with Poshmark and Mercari, both sites do not like robots. So i would think typing would be similar to a human.

Not with these browser form actions, no. You can have text inserted by typing with the Insert Text action, but that requires you to manually select the field. If you're okay with doing that, you could also have the macro set the variables acquired from Excel to named clipboards as per your original question, or even create several simple macros where each one just inserts a different variable via typing, perhaps also giving them all the same hotkey and accessing them with a conflict palette.

You could potentially use the Focus Front Browser Field action followed by the Insert Text by Typing action.

I have tried to select the fields from excel, but for some reason I cant get it to paste to my clipboard. that has been my biggest challenge. Can you put together a simple macro getting it to the clipboard and I can probably figure out the rest.
Reseller Field Guide (Free to View_ Updated Mondays) Download Your Own Copy @ bit.ly_resellerfieldguide.xlsx.zip (274.5 KB) 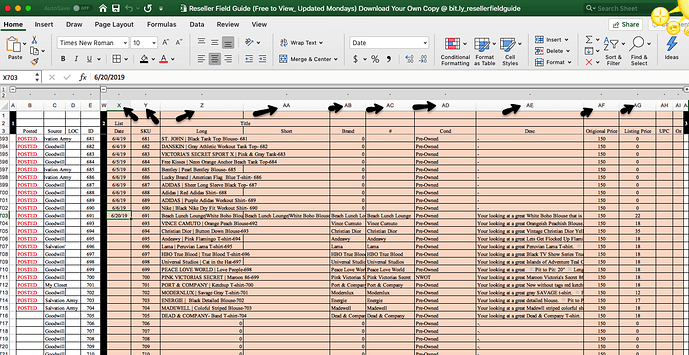 Sorry if I led you down a sub-optimal path. @peternlewis's reply above reminded me of the Focus Browser Field action, which I had completely forgotten about, so there's no need to worry about the clipboard like I said in my last reply; you can have the macro type into the fields you need after all. All you need to do is use a Focus Chrome Field action instead of a Set Chrome Field action, followed by an Insert Text by Typing action that types the variable needed. Here's an example with a Safari action, though it should work identically for Chrome:

Excellent! Let me try this out.

Hey guys, is there anyway to do this exact process on a PC? Or can i do this on my ipad or iphone?

There's no way I know of to do this on an iPhone or an iPad.

On the PC you could look into AutoHotKey:

Free keyboard macro program. Supports hotkeys for keyboard, mouse, and joystick. Can expand abbreviations as you type them (AutoText).

I haven't used it for years, but it was insanely powerful then and no doubt has come along way since. The learning curve is a bit steep, but it's a powerful and free product.