As some of you may be aware, the Finder already offers a similar feature. While it works OK, this macro offers the following:

So this macro may, or may not, be a benefit to you over the Finder feature. You can choose.

Create New FOLDER in Current @Finder Folder.kmmacros (13 KB)
Note: This Macro was uploaded in a DISABLED state. You must enable before it can be triggered.

USE AT YOUR OWN RISK

Hi @JMichaelTX
I'm wondering if you could help me troubleshoot why my Macro isn't working the way I had hoped.

I used your "Create New FOLDER in Current @Finder Folder" macro as a basis for mine. My functionality needs are simpler and doesn't require user input after triggering the macro.

Here's what I want mine to do:

The macro I created using your actions as a reference, works fine when I select one or more .jpg files by themselves or with a sibling folder, however, if I select just an empty folder or a folder with other files inside and run the macro, its name gets CHANGED to "Studio" and a new folder named "Studio" is created inside but all the files that were contained within the folder I selected are now siblings to the folder that was previously their parent. So, I end up with:

I think this behavior has something to do with the 'Move or Rename File' action. It's like, if there are files involved in the selection, it will move them and honor all existing file and folder names, however if there are only folders involved in the selection, regardless of whether they contain additional files, they get renamed instead of being moved into a sub-folder.

Is there a solution to this Move or Rename behavior? I don't want it renaming lone folders I select.

Thanks for your attention. 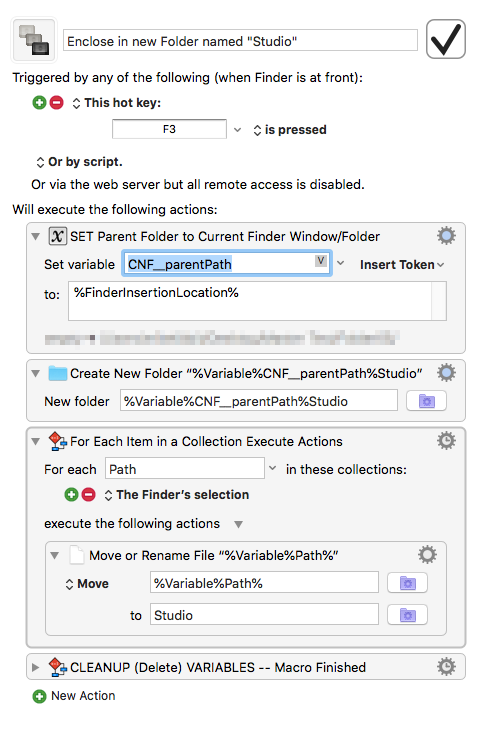 I have a parent folder full of loose .jpg files and some other .jpg files in sub-folders within that parent folder. I would like to select one or more of them (files and/or folders) then trigger a macro that puts everything I selected into a brand new sub-folder named "Studio" within the existing parent folder.

If I understand your requirements, workflow, and macro correctly (and that's a BIG IF), then:

The "to" field of the File Actions action must be:

If you wish to just move a file, specify an existing folder as the destination of the move.

So, I haven't tested this, but I think you need to change the Move Action to field to:
%Variable%CNF__parentPath%Studio

TEST that (using only test files/folders) and let me know if that works. If not, I'll investigate further.

I'm curious about the Action: Get File Type to Variable CBD__DoesFileExist" - are you using that as a method to check for the existence of the folder?

are you using that as a method to check for the existence of the folder?

Although he uses the action-result instead of the variable in his test.

Thanks, Chris. I thought so, but I wasn't sure what the advantage was to doing it that way over checking for the existence of the path using an If statement. Clever idea though.

but I wasn't sure what the advantage was to doing it that way over checking for the existence of the path using an If statement.

Just another example of TMTOWTDI (There's More Than One Way to Do It).

The IF-THEN action with a path-condition is probably a little bit more readable.

Thanks a lot for this macro Michael. It helped me making another one, learned something new too.

Just wanted to leave a note here to say thanks, I've been able to use your script