I'm trying to use the screenscapture command to capture video using the '-v' option.

When I run the same command in KM, I know the command runs because the .mov file gets created but it only gets an initial image, and not a video. The ps aux | grep screencapture shows that it's no longer running. And no frame is rendered around the recording area.

Any idea what I'm doing wrong?

Note: If you try this you'll need to delete the .mov file between attempts. If the file exists when screencapture ends then the file will not be overwritten.

Execute a Shell Script.kmactions (893 B)

I'm not absolutely certain I'm correct on this but...

For the video record function screencapture is running as an interactive process. Termination as you say is accomplished with Ctrl-C.

Keyboard Maestro's Execute a Shell Script action is a script-runner mechanism and not an interactive terminal, so it has no means to allow the script to keep running and abruptly terminates.

I think there's no way to use Keyboard Maestro for this directly, although I suspect you can script the Terminal.app with AppleScript to do the job.

Hmm, yeah that does sound like what's happening here.

I'll give AppleScript a try.

Following Chris' advice I wrote the following. I'm posting this here in case someone else finds the same need.

This sample does the following:

Note: By default the terminal window will stay open when it receives the exit command. To change this behavior in Terminal --> Menu --> Preferences --> Profiles tab --> Shell tab; Set When the shell exists to Close the shell if exited cleanly

Note: Screencapture will not overwrite any existing files. You'll need to manage these files separately. 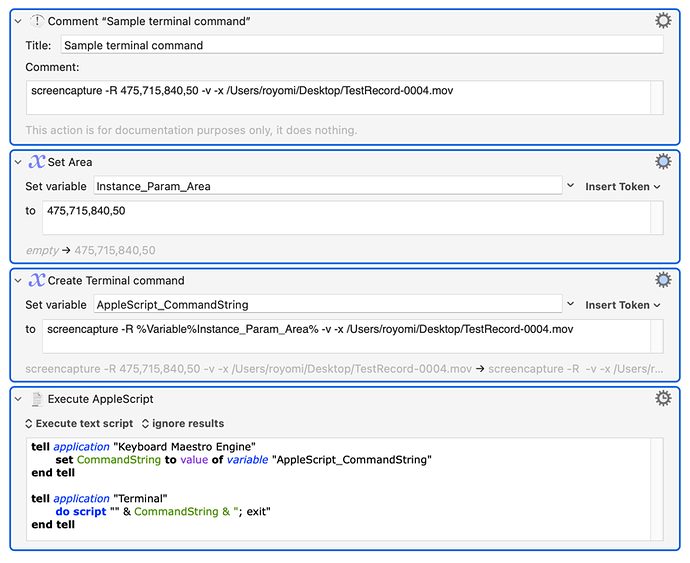