Having Trouble Installing Plug in Actions

Every tutorial I read about the installation process tells me to drop .zip files on the Keyboard Maestro icon on the dock. That is what I am doing but can't find the actions anywhere. Not sure if I am missing a step somewhere. Any advice?

You need to restart the km editor after the dropping.

If you’ve installed them correctly (and it sounds like you have) then in the KM editor you have at least 2 ways to get to your installed plugin actions as shown in this screen grab from the KM wiki: 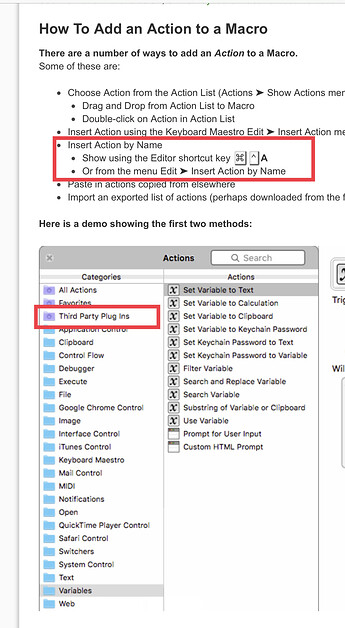 I’m not at my Mac right now so I hope you can figure out now what to do.

Thanks. I have also tried looking under "Third Party Plug Ins.” but nothing is listed there. Also tried inserting by name but still not seeing any I've installed.

No - you need to restart the KM Engine.

I restarted the engine completely and still nothing under third party plug ins.

What plug in are you trying to install?

Last one I tried was Execute a Script in Terminal.

The answer to your problem is given in the thread where you got the plug in from.

Execute a Script in Terminal Plug In Actions

This is completely my bad, I was trying to import the .zip that I downloaded from this forum post. But I must, Unzip the archive first. Run the .dmg And then, import the archive it shows. [Screenshot 2020-07-31 at 8.29.27 PM] Doing so worked.

And make sure you’re using the most recent version of the plug in - 2.1 I think.

I have a folder that says Execute a Script in Terminal.zip (which is what im dropping on the KM icon) Inside the folder there is an AppleScript file, KMAction.plist and a PNG file. Not seeing dmg file.

Can you upload the plug in for others to test?

Then you're doing something wrong.

Because @Tom chose an unconventional way to distribute his plug in you have to install it slightly differently to the way described in the KM wiki. This is described fully in the thread I pointed to earlier but I'll spell it out for you here:

If you don't follow these steps exactly, then that's what you're doing wrong. I've just followed them and this is what I see in my action list: 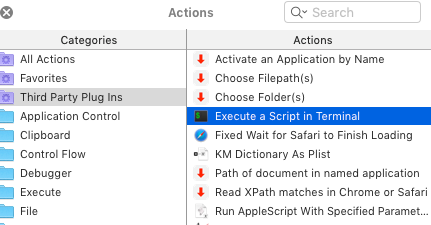 Good luck - let us know how you get on.

BTW - what version KM are you on?

That a bit cheeky @martin - you can download it yourself, you know

That a bit cheeky @martin - you can download it yourself, you know

I downloaded it, dragged it to the KM icon on the dock. It shows up in the action list immediately. I did not even restart either the Editor or the Engine. @peternlewis, Is a restart of KM (Editor/Engine) really needed?

Also, I was trying a simple cmd as echo. But the result of the plugin is a list of the folders in my home directory. Edit: my bad. Apparently, I did not observe carefully. This is exactly what the plugin does. (But I don't know what the text and the Check Box are designed for. Edit: Just took a look at the sh file. The text and Checkbox do nothing in the sh script file.)

A simple example Shell Script action that lists a directory and shows some of the other types or parameters you can use.

I don't know how that translates into Execute a Script in Terminal.zip

I don't know how that translates into Execute a Script in Terminal.zip

Sorry, I don't understand what you are saying.
To install the plugin, just download the zip file, dragged on the KM icon on the dock.
Without a restart of either the Editor or the Engine, the action shows up in the action list immediately. See "Example Shell Script" in the screenshot below:

I see. Sorry. I just assume he was not referring to the plugin you mentioned. Since the OP appears to refer to any plugin.

I have a folder that says Execute a Script in Terminal.zip (which is what im dropping on the KM icon) Inside the folder there is an AppleScript file, KMAction.plist and a PNG file. Not seeing dmg file.

It's not a dmg file, it is a regular plugin file that has the required files. (Probably my guess was wrong as well. The plugin I referred to is not an AppleScript but a sh file.) So I have to come back to my original question:

Can you upload the plug in for others to test?

It's not letting me upload the folder but this is what I get when I download a plug in from this site.

Inside the folder I only see:

This is the same type of folder I get anytime I download a plug in (or try to) from this forum.

I'm sorry if I'm missing something obvious here. I appreciate all the help.