I am seeing strange inconsistencies when trying to copy the system clipboard containing an image to a named clipboard.

Best to demonstrate with examples:

Value inspector showing both the System Clipboard and a clipboard named copylinkCopiedContent after using ⌘C to copy an image from a display in Preview. 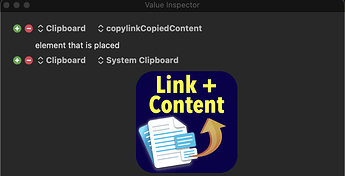 The macro that I used to copy the System Clipboard to copylinkCopiedContent. 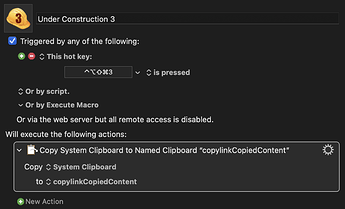 Value Inspector showing the contents of both clipboard after executing the macro. 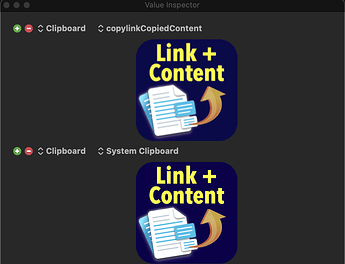 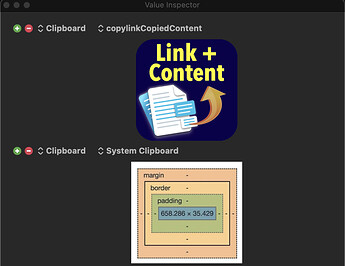 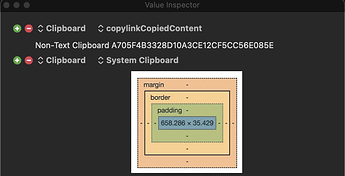 I have tried a number of obvious things, like clearing out the previous image in the named clipboard before doing the copy. I have not found anything that helps with the problem. I am also giving the system plenty of time between actions; sometimes timing matters with the clipboard.

I have not tried this out with a bunch of different applications. But this one demonstrates a circumstance where a System Clipboard that looks right in the KM Value Inspector and behaves correctly in all other respects cannot be copied to a named clipboard by Keyboard Maestro.

@peternlewis , this one is probably for you. I understand that Mac clipboards (i.e., Cocoa NSPasteboard objects) are complicated beasts. Any thoughts?

Its hard to say what the cause might be. It might be that it is caused by one or other of the various flavors that are actively ignored by Keyboard Maestro because reading them causes problems.

There was an app called ClipboardViewer

One option is in Apple's Additional tools for XCode
https://developer.apple.com/download/all/?q=clipboard%20viewer

I’ll poke around a bit more and see what I find. I am curious that the KM value inspector sees the named clipboard properly, but the copy clipboard action does not. Clearly there is some strangeness.

I looked at the pasteboard with a bit of AppleScriptObjC:

The following pasteboard is properly viewed and copied by Keyboard Maestro:

This pasteboard can be viewed by KM's Value Inspector, but the Copy Clipboard to Clipboard action fails:

There are some obvious differences. Is there any more information I can provide that would help?

You may see some of the basics for reading NSPasteboard.generalPasteboard items, of various types, in this macro:

The clipboard reading code I use is incredibly complex, not the sort of thing you would want for just looking at the clipboard.

Understood. I've been asked the equivalent of that question more than a few times in my life, and can hear the groan from here.

I would hardly call this an elegant solution, but it works: