Uh-oh, this will probably be up to Apple. 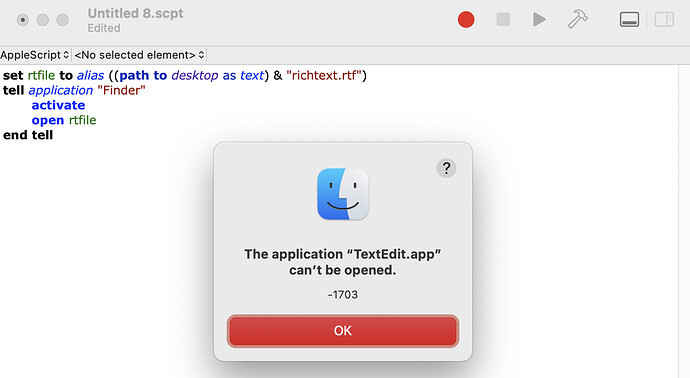 Hi @Lantro. If you haven’t seen it already, check out:

Hi, I just updated to the latest Logic pro and Mac Osx... I used to open files with the "Open Finder Selection in Front Application" action however after the update this does not work anymore. (Logic Pro simply opens the app but not the file) However, If I use token Open "%FinderSelection%" everything works fine. I am wondering if anyone has this problem. TX P.S This issue is only with Logic pro and the "Open Finder Selection in Front Application" action works with other files. [Screen Sh…

BTW, you won't have any problem running the AppleScript if you're using macOS 12.2.1 or older. It's simply a matter of enabling access in Security & Privacy prefpane. There may be a way to bypass it in 12.3 as well, but I haven't found it yet.

Here, try it yourself. Script Editor.app is in /Applications/Utilities. Don't forget to use TextEdit.app to create a file named "richtext.rtf" on your Desktop first.

Oh dear. I can confirm that this seems to be a bug in OS 12.3
All my open Applications Actions with Finder are broken 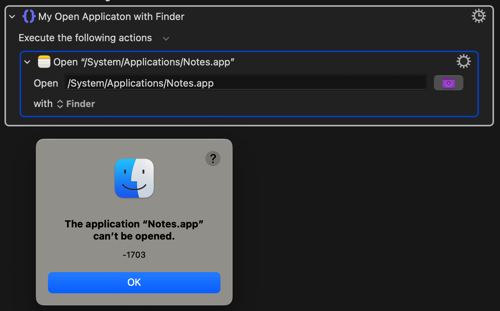 I'm still on Catalina so I can't test I'm afraid. This might seem a bit facile, but what about changing the open actions' "with:" option to Logic rather than Finder? Does that make any difference?

I had an issue with opening files with Lossless Cut (a video trimming app). I got around it by setting my macro to open the app, wait till it was at the front and then open the file with the app. I appreciate this is more work than you may want to do. I suppose you could create a subroutine with the app name as a variable, but the wisdom of @peternlewis would probably be of help to you.

In the meantime, did you try @_jims' suggestion?

I have the same issue where I cannot get GarageBand to open Finder selection via Keyboard Maestro.

My current workaround is to activate GarageBand first and then make the GarageBand open the Finder selection.

I'm still on Catalina so I can't test I'm afraid. This might seem a bit facile, but what about changing the open actions' "with:" option to Logic rather than Finder? Does that make any difference?

For a Path to a File (which can be a Variable)

But this is a pain (for me at least) because I have many Macros set up the other way, which worked fine yesterday... Not sure if it is worth changing them all as this is probably an OS12.3 bug rather than a feature.

I had the same issue and I had to change the way I open Files. 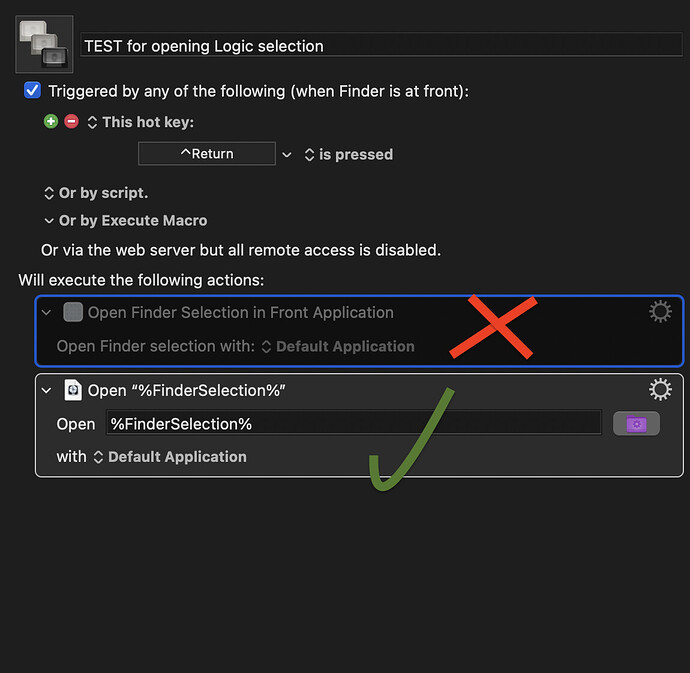 Hi @Lantro - I hope you don't mind, but as this seems to be a general bug in macOS 12.3 I changed the title of this thread to help others who are having the same issue. I bet it has affected a lot of people.

I did report a bug using Feedback at Apple.com, BTW.

Yeah, this hit me today. As a heavy Finder/KM user, I use these open Finder files with application macros a lot. At first I thought Photoshop had broken, which is certainly the most likely issue. I'm going to hit these keystrokes and have the files not open countless times before there's a fix, and 'til then I'll try to just control click or drag a Finder file to the dock.

It appears there is a bug in macOS 12.3 Finder such that asking it to open documents via AppleScript is broken in a variety of ways.

The best apparent solution so far seems to be:

For launching applications, you should probably always be using the Activate a Specific Application action to launch it.

Noted. And I see the warning triangle when I have changed my Action from "with Finder" to "Default Application". And this warning is similar to what you have just written.

In my case the Actions that were working before and are now broken by the macOS12.3 bug all look like this:

The Dictionary entry is a path to an Application (it could have been a Variable). Either way, it varies.

What I like about this use of "open with Finder" Action is that it restores the Application Window even if its Window has been minimized.

I think I will just have to wait until Apple fix the bug. As it affects AppleScript it's probably going to be noted by lots of people. I have sent a bug report in to Apple and hopefully others will too. Feedback - macOS - Apple

The irony is that I was waiting for the release of 12.3 to fix another AppleScript bug (to do with making a Contact using AppleScript) and Apple actually fixed that but now this other thing is broken…

The good news is that this seems to be getting some reporting outside of this Forum so, bodes well for the macOS12.3 AppleScript bug to be noticed and fixed:

From this report, a little way down on the page: Problems with macOS 12.3: reports of broken MacBooks, broken scripts - Kiratas

Problems also with Safari 15.4 and AppleScript

macOS 12.3 also brings new bugs with AppleScript and apparently prevents files from being opened – a basic function. This fails with error -1703, as reported by the developer of the keyboard shortcut tool Keyboard Maestrowhich is directly affected.

I'm using macOS Monterey 12.3 on a 24" M1 iMac.
I'm not sure if I'm following this thread, but FWIW this works whether TextEdit is open or not.
I have the following macro that's triggered by a kmtrigger file (so I can have it in the Dock).

The bug that I described for scripts involves Finder, Keyboard Maestro, and other possible "helper" apps. I think it's a lower level bug than what your method employs. For one thing, ".rtfd" documents are actually folders on the basic level. If you want to exemplify the bug on your system, you could remove all elements other than rich text from your "Scratch Pad.rtfd" document and save it as "Scratch Pad.rtf", then run the following AppleScript in Script Editor.app.

If you ensure that TextEdit is not running when you first run the above AppleScript, you'll observe that TextEdit launches, but doesn't open your document. If you run it again without quitting TextEdit, then you'll see the -1703 error.

There are workarounds, but the bug signifies an unwelcome change to the Mac system for many of us, and we'd like to see it fixed. But chances for that are quite unpredictable, I'd say. I've frozen one static backup method for my system, but I'll probably have to abandon that strategy eventually.

Not sure what else the Monterey 12.3.1 update may help or harm, but it does appear to fix this. Thanks, Apple.