Removing the Last Macro From a Search Removes All Macros

I just ran into a bug with Keyboard Maestro 10 (might have been there in 9) which caused me to lose all of my macros.

Was able to get them back, but still, this might be worth looking into.

Reproduced it in a VM running Monterey with a clean install of KM 10, using the following steps: 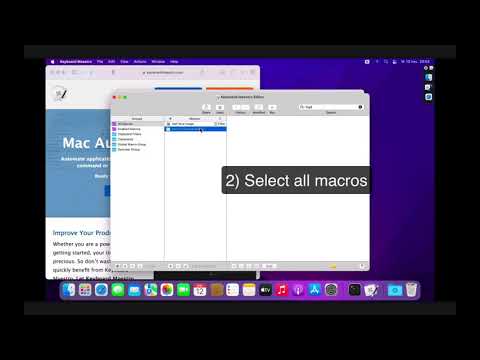 If any other info is relevant I'm happy to provide it.

That's not a bug; it's a feature. The filtered items are the ones not found by the search.

@peternlewis – I don't see this in the Wiki.

The Filtered entry is a place holder for all the macros not matched by the filter.

Ah, I didn't understand the replies, until I went back to the video to check!

In my original finding of this bug I had matched about 26 results. Did not notice that extra one, and did cmd+A, delete. And even when making the video, and being very mindful, somehow my mind never noticed that specific one. (I just saw that it matched two macros, and since it was a demo environment I didn't really check which ones.)

Now that I know… I get it as a feature, and I'll admit I even like the idea of it, but personally I'm not a fan of the implementation.

For me as a user I would never expect that doing a search, followed by cmd+A, would also match everything not in the search, because of a "placeholder".
I'm not sure if there's a feature request in here somewhere — and since I seem to be the first person to report it, it might just be me being stupid — but I'd like something to be different about this UI.

[edit: phrasing on my part could've been confusing, fixed]

Filtered entry is a place holder

I can see this new feature confusing many users...

I'm not entirely wild about this new feature.

As Martijn says I don't generally expect a search to also display what was NOT found – particularly when the Keyboard Maestro Editor supports negation.

But... I have't used it enough yet to have a strong opinion.

My fear is that many people like Martin will accidentally delete a bunch of stuff they didn't mean to and then have problems restoring them.

I had to read and re-read this thread before it clicked what was actually happening. I am definitely sure I would get into the same problem sooner or later and so I also second the change to the wording at the very least.

I can see this new feature confusing many users...

Well, the previous solution confused many users, which is why there is a new solution.

My changes are often made to reduce support load (man, do I wish I could fix the bugs in Apple’s security permission system!). People were often confused that all their macros were missing because they had something in the search filter field. This resolves that issue. Time will tell whether it produces other issues.

My changes are often made to reduce support load

Okay, I certainly get that.

How about making the descriptor text a little more clear, and then we can document it carefully on the wiki.

How about making the descriptor text a little more clear, and then we can document it carefully on the wiki.

OK. I'm open to suggestions. This is the space you have to work with:

Would it make sense to have extra info in a delete confirmation box? Of course getting people to actually read it all might be difficult….

As you note, nobody reads the alert. I could have an alert where you had to manually type in the text of the alert and people would still email me and tell me they never saw any of it.

This is why there is Undo. And Revisions.

This is probably too complicated, but could we exclude the "filtered macros" from cmd (⌘)+A?

Another idea: right now it's kind of faded, which is why I probably missed it. What if we turn that around, and actually make it more visible?
Ah… That probably doesn't make sense, because it's not where you want the focus in most cases.
Sorry, just thinking out loud here.

BTW, finding the right solution to reduce support load is something I'm also dealing with every day in my work, and no matter what you do, people will tell you that your solution is "wrong".

People are going to immediately understand “not found” but won't fully understand “Filtered Macros” (at least without an explanation).

This is probably too complicated, but could we exclude the "filtered macros" from cmd (⌘)+A?

I have made Select All initially not include the Unmached Macros entry. Actually, like everything, it is way more complicated than you'd expect, here is the actual pseudologic:

Select All a second time will select the entry (or if it is already selected).

I've changed it to “And 1638 Unmatched Macros”, which required the smallest column width to be increased negligibly.

I have made Select All initially not include the Unmached Macros entry. Actually, like everything, it is way more complicated than you'd expect, here is the actual pseudologic:

I've changed it to “And 1638 Unmatched Macros”, which required the smallest column width to be increased negligibly.

Select All a second time will select the entry (or if it is already selected).

Curiously, I use the same mechanism in Find Any File, but for a different case: If you find multiple files and display them in the hierarchical view where you'll also see the enclosing folders of the found items, the first cmd-A only selects the found items. But if you hit cmd-A again, it'll select all items, including the parent folders that are shown in cursive.

Now, one can also use the Filter control to search the found items and show only the matched items. But cmd-A won't then select the unmatched items, even if you type cmd-A again, because that might be confusing.

Ideally, I want to add a checkbox mode, where the selected items can be checked, and then you could use the Filter to match other items, and check those as well, and so on.

I really like this solution. Well done, Peter — thank you!