Kudos to you for providing an actual link to Agenda in your first post – this sort of thoughtfulness and thoroughness makes it much easier to help people.

If you have a couple of free minutes and the inclination, would you mind briefly expounding upon why you like Agenda?

I suspect I’m not using Agenda in the manner anticipated by its developers. The main feature that attracted me to it was the ability to collapse each note, and the way it syncs between Mac and iOS.

Background: I’m a lawyer, and my firm uses a case management system where we track pretty much everything about our cases. I love it, but it’s one drawback is that it doesn’t save as you type. It’s cloud-based, and if you close a window, you lose everything you’ve been typing.

For a couple of years I used Folding Text on the Mac, and Editorial on iOS. Both have the ability to collapse (or fold) text at the header level. So I take a note, and then collapse it after transferring it, so the only expanded text on the screen is my current note.

Agenda is nice because with Folding Text, I started a new note each day. With Agenda, I just enter a note, and it is automatically added to the day. I also have a nice skimmable list of all the notes going back several days.

As noted, I can also skim my list on my iOS devices. You can also export in Markdown format. You can also write in Markdown, and it will instantly convert it to rich text (it doesn’t preserve the Markdown).

I’ve uploaded a screenshot showing my typical desktop space, although the blur I used to blur client names makes it look messier than it is.

I hope that helps. If you have any other questions, let me know. 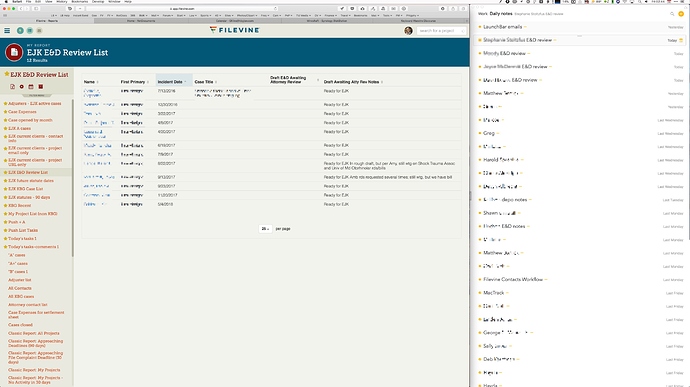 I suspect I’m not using Agenda in the manner anticipated by its developers. The main feature that attracted me to it was the ability to collapse each note, and the way it syncs between Mac and iOS.

Thanks for sharing. I'm a big Evernote user, but section/topic folding/collapsing is a key feature that it is missing.

How do you like the Search feature?
Does it offer boolean search by any chance?

Looks like Agenda has a forum that also uses Discourse.

A place for users of Agenda to discuss the app, how they use it, and what they would like to see in the future.

It may be worth reviewing and/or asking questions there.

I’m actually not too familiar with the search, as I only ever have used it to search for client names. If I learn more, I’ll check back in here.

Thanks for the pointers to Agenda. The app looks really interesting.

It's essentially built on SQLite stores – see for example:

to take a view of how readily you could write SQLite queries to extract your data if the app itself went away.

(Or export a project to the .agenda file format (zipped folder containing JSON and attachments), and check the JSON structure to form a view of its intelligibility and ease of conversion)

I hope that helps. If you have any other questions, let me know.

Thank you for taking the time to explain your use of Agenda.

It's always helpful to talk about a software app with an experienced user who is also articulate.

I reckon I'll take it for a test drive.