I'd like Typinator to activate multiple rule sets when Todoist "Quick Entry" dialog window is active. 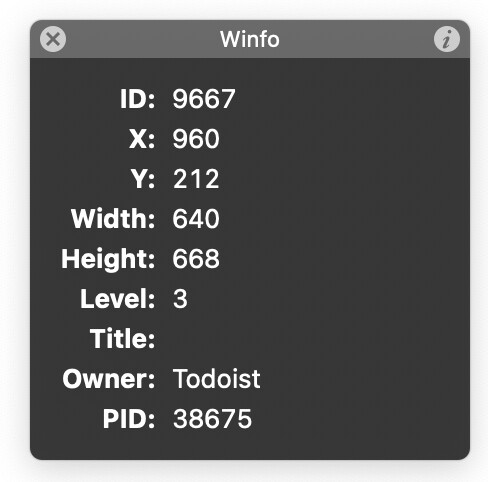 Thanks to @ccstone for providing links to this useful tool!

My AppleScript knowledge is rather basic, so this is my futile attempt:

This is an example from Typinitor guide to pause expansions:

My AppleScript knowledge is rather basic, so this is my futile attempt:

Hey there! The way that is written is telling Typinator to look for a Typinator window with that ID number.

I don't have the Todoist app so I am rather limited in how much I can help, but you my first question is how are you triggering the Todoist "Quick Entry" dialog window? I ask because if you're using a hotkey, then you could likely trigger it via AppleScript using system events, and then right after that enable your Typinator set(s).

Report back and we can help further.

I am using ⌃ Space to trigger the dialog windows!

Ok then! Try this:

Basically that uses System Events to simulate that same hotkey combination, sending it to the Todoist app (which theoretically would trigger your dialog window), and then the next section enables your Typinator set.

Let me know if that works for you or not and we can go from there.

Thanks, that works like a charm! Any idea on how to get the Typinator set to deactivate when the dialog window is gone?

Basically I want the abbreviations set to be active only for Todoist.app and for the "Quick Entry" dialog window, which are not considered to be the same thing by KM or the system in general.

Great! To deactivate the Typinator set when the dialog window is gone try the AppleScript below. It should theoretically wait until the window disappears and then disable the set. I can't guarantee it will work because I don't know exactly what kind of window the Todoist dialog window is... but I imagine it will have an AXSystemDialog subrole. Try it out and let me know if it works or not.

Looks fantastic, although is not working at the moment.

Here is a UI Browser report on the Todoist "Quick Entry" window:

This is very helpful, I didn’t realize before you had UI Browser otherwise I would have asked you to do something for me from the beginning haha. Replace the third section in the AppleScript with what I have below and try it again. If it still doesn’t work, let me know because UI Browser has a way to get even more information on that window that will tell us very clearly how to interact with it.

Thanks so much for your help, this macro is sorely needed! The script update didn't seem to help unfortunately

This is the overall script as pasted in KM:

I tried extracting the hotkey AppleScript action and make it a KM hotkey action, but it didn't work: 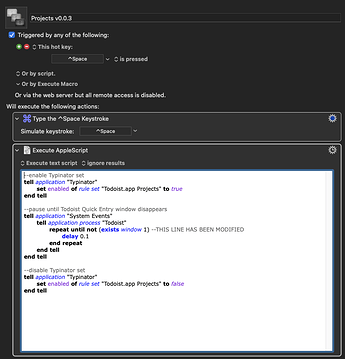 Here are my Typinator settings: 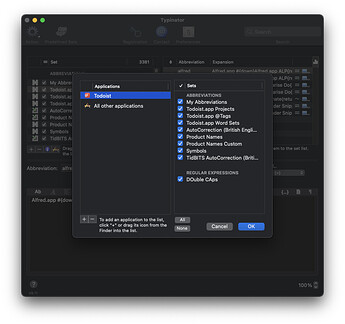 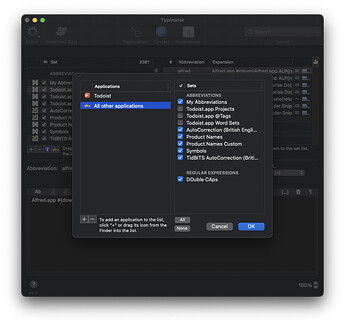 I tried extracting the hotkey AppleScript action and make it a KM hotkey action, but it didn't work:

That's because the KM action is not sending the hotkey to Todoist like the AppleScript does. There is a way to do this, but this is not really the problem here.

Do this for me:

Let me know what you find with that and we'll go from there.

By the way, extracting the hotkey from the script and making it a KM action successfully calls the dialog window. Is only the text expansion that does not work. Typing in the window is al messed up, huge delay or no input response at all. Which is similar to what happens with the AppleScript alone.

Hmmm... this is odd, but some apps just don't play well with AppleScript.

Try this script below to ensure that AppleScript can actually detect the window...

Thanks for sticking around on this one.

Thanks for sticking around on this one.

My pleasure! I enjoy troubleshooting things even though I'm not always very good at it.

Something very strange is going on... because there's no reason you should be getting multiple display dialogs appearing... see my screen recording to see the same script used with Notes, only one display dialog.

Ok so this has me irritated enough that I downloaded the app to figure out what is going on.

Try this updated script below and report back. On my system, it works just as I expect it to. The AppleScript runs until the Quick Entry window appears, shows a notification from Control Center (much less disruptive than display dialogs), then waits until that window disappears and shows another notification. Theoretically I could add in the Typinator portions now too, but I want to see if this works on your end before I do that.

Note that for whatever reason Todoist would not allow me to set ⌃ Space as the hotkey so I set it to a different hotkey for testing: ControlOptionCommandShiftl+ (the plus being the one next to the delete key).

UPDATE: I just added in some Typinator script to enable/disable one of my sets and the AppleScript works great for me. Hopefully it works for you too!

@splitpersonality Hey Alex, were you able to get your macro working?

It's working. I can't even explain how grateful I am for your help. I've been wanting to do this for years!

I'll play around with including the other sets, but I am confident they'll work as well.

UPDATE: It all works. I managed to find the exception: it does not work if Typinator editor windows is active.

It's working. I can't even explain how grateful I am for your help. I've been wanting to do this for years!

Glad it appears to be working for the most part and glad to have helped!

UPDATE: It all works. I managed to find the exception: it does not work if Typinator editor windows is active.

Just out of curiosity, what doesn’t work when the Typinator window is active? The video appears to show things when they are working so I just want to make sure i'm not missing something...

My example was just to show that everything is working.

The only exception is if you try to call Todoist "quick entry" window when Typinator settings window is active. In that case Typinator was not active, Finder was.

Hmmm... which part fails exactly? Because the AppleScript is not dependent on which application is or is not frontmost. So the issue might rather be with the way the Todoist window is being activated.

I believe it’s because Typinator sets are not active in Typinator itself. Typinator thinks it’s still active when the Todoist dialog appears, so it does not expand the text.

A workaround could be to tell KM to activate Finder when pressing CTRL+SPACE if Typinator is at the front.