knowing that some of you use BetterTouchTool to trigger KM macros, I just wanted to point out that the developer now offers 2 license models.
Everything else can be found on the website.

The liftime license currently costs only 20, - $ 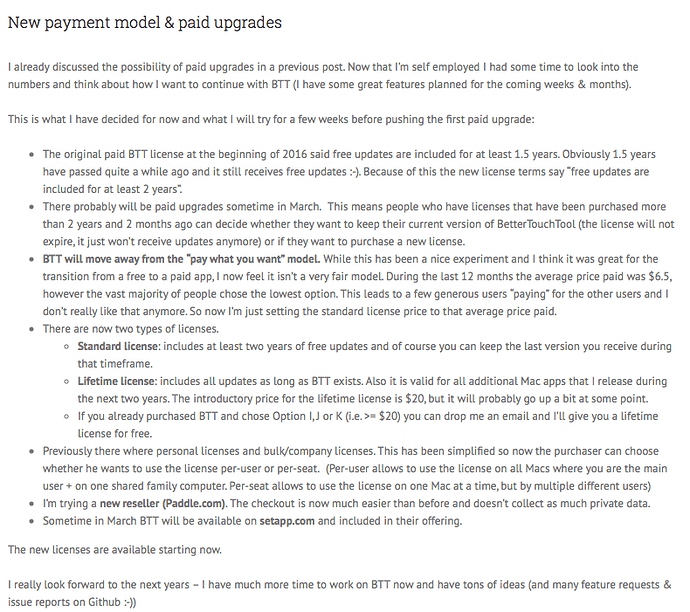 Thanks for pointing this out. I bought a lifetime license. I’d bought a $4.99 license before, and while I don’t use it very often, I may in the future.

Thanks for pointing this out

But I came across it myself by chance when I posted my KM backup for BTT.

According to the developer, an iCloud Drive Sync will be possible in the future, until then I secure my master file so…

no backup of BetterTouch Tool on iCloud Drive... 😢 Nothing is impossible with @keyboardmaestro und Hazel 4 from @Noodle_Hazel 🤓 https://t.co/pHVIDj0dfh
Francesco_Peeters April 21, 2019, 7:23am #4

I know this is thread-necro, but thanks for the notify, I missed it because I haven't used BTT in a while!

I always loved BTT, and used it a lot, but stopped using it when in newer versions (Probably started with either MacOS Sierra or High Sierra, or with the 2017 15" MBP) I started having weird behavior where threads (apps) would get stuck in ?E state when they closed down, and were unable to restart because they were still running according to the kernel... (Process Viewer wouldn't show, nor would "Force Quit...", only 'ps -auxw') Even a 'sudo kill -9' would not get rid of it, they'd remain stuck in ?E until reboot, but even that wouldn't work, because they wouldn't even die on shutdown so I had to power-cycle to get back.
The behavior persisted over 6 or 7 re-imagings, and we even started considering going to Apple to have the hardware inspected. I have had the current re-imaged version running for a year and have all tools reinstalled except BTT, and no ?E's... In the previous instances it always started coming up after installing BTT a few days in (I varied installation order to get a rough idea of which app might be causing it)
Thus I am now very hesitant about installing BTT...

I did just buy the lifetime though, because I think the author deserves it. I originally paid $6 (which I was at that time expecting would become an annual fee), but $20 is more than fair for a lifetime BTT license!