Bug or not Sending Mail with Sierra not working

Since I upgraded to Sierra yesterday send mail is dumped into Draft folder and aren't sent??
** 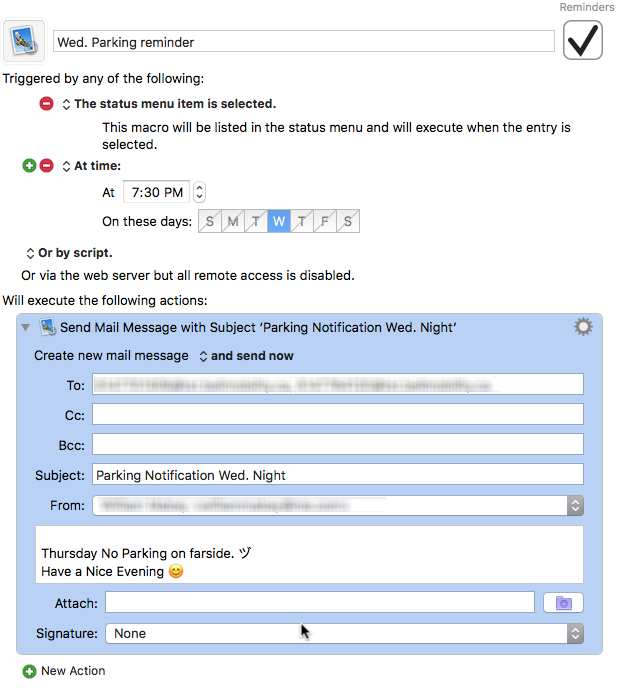 Automator Works fine though??
Although "And leave open works fine.

You think you’ve got problems. My iMac seems to be working OK but I can’t get onto the internet with wny of the Apple software on my Macbook Pro. That’s Safari, Mail, App Store, iTunes. Emails come in in Mail but there’s no content ot them. I can’t even read old mails. Fireworks and Thunderbird work fine and Network Diagnostics tell me that everything is fine.

Update on the above.
Safari and App Store have decide to start working for some reason, I can send emails with Mail but still can’t read my mails so hopefully things will improve.

Yes, looks to be the case. It could be either a change in the AppleScript support of Mail, or alternatively it could be just a plain bug in Mail.

@ccstone - do you have a Sierra Mac handy that you could check the AppleScript for sending a Mail message? You’re much better at AppleScript than I am.

Otherwise I’ll try to delve in to the AppleScript to determine if the issue is a change or a bug in Mail.

My Fix and works fine....Shenanigans...

I’m facing exact same problem in mac os Sierra. All the emails from keyboard maestro gets saved in draft instead of sending.

Also, sometimes the email sent by keyboard maestro does nothing at all. Not even saves in draft.

Same issue here. Since the AppleScript solution noted above works, it would seem that the solution lies in that arena.

Keyboard Maestro uses essentially the same AppleScript, but configured with “visible:false” since you don’t want to see the message.

Unfortunately, this is broken in Mail in Sierra. Essentially this is a bug in Mail, and the only alternatives are:

None of these are good options unfortunately.

I did a little bit of testing, and the visible flag for mail is decidedly different AppleScript for Sierra.

Visible:true sends the message when the send AppleScript command is used.

Visible:false places the message in the Drafts folder with the send AppleScript command is used. No message is sent.

The messages appear in the Sent or Drafts folder and are not opened in either case for the user (as they were in prior system versions, when the visible:true flag was used).

I think an AppleScript could be written which would imitate the opening of the email when dropped in the Drafts folder. This would simulate the “old” behavior of AppleScript for Mail.

Ok, here is code to get the most recent message in the Draft folder and open it:

Courtesy of flacle at StackOverflow.

This version fixes the send now option with Send Mail Message action in Sierra, and an issue reading/writing variables in the Custom HTML Prompt action in Sierra and adds a warning and advice on dealing with the Sierra App Translocation security system. This version also ensures the Composite onto Image action always works on pixels. Changes in 7.3.1 * Fixed Send Mail Message action send now option in Sierra. * Fixed read/write variables in Custom HTML Prompt in Sierra. * Ensure Composite on…