macOS Sierra offers the possibility to sync the Documents and Desktop folders to iCloud Drive.

Basically this can be a nice thing, but sometimes you just want to exclude certain files/folders.

Unlike as with Time Machine or CrashPlan backups, where you can exclude items by setting an extended attribute[1], there is — to my knowledge — no such attribute that would allow you to exclude items from the iCloud sync.

The only way — afaik — to exclude items from iCloud sync is:

Well, this is better than nothing, but, in case of a file, it “kills” the real extension of the file, and hence causes problems.
‌

Today I found out, by accident, that you can use the .nosync suffix also as infix, and it still works:.

…you can also name it…

This is way better, because the .pdf extension remains intact this way and the file is recognized as pdf by your programs and the Finder.

So, here’s a little macro that allows you to quickly mark a file/folder as excluded from iCloud sync:

What the macro does… 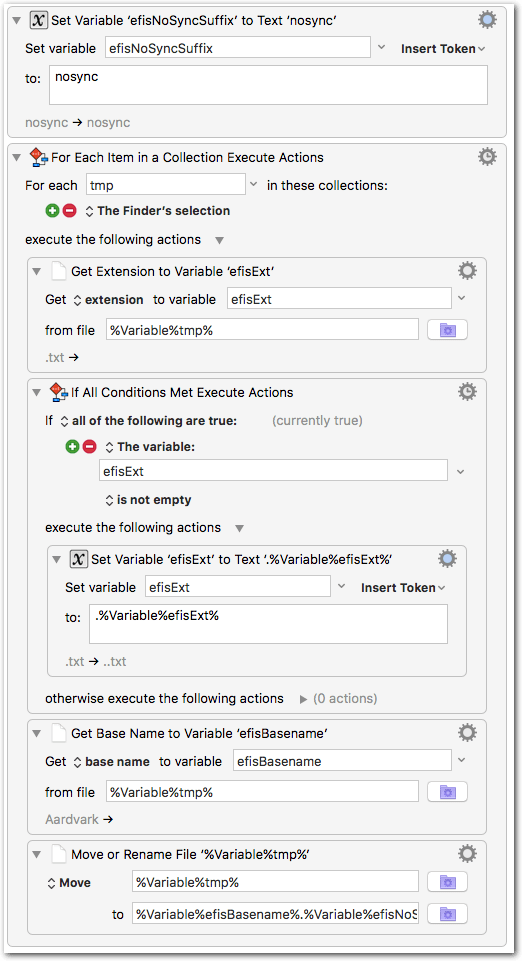 [1] com.apple.metadata:com_apple_backup_excludeItem
Edit: I have just posted another macro for that.

This is my original bash version of the macro. You can use it for example as LaunchBar action or as standalone script: