Apple’s decided that app icons should look like white squircles with a tiny icon in them for some reason known only to Apple management.

This is bad enough on Big Sur, and Apple’s apps, but even more annoying for third party apps when you are using pre-Big Sur. And unfortunately Apple removed the ability for developers to provide two different styles of icons. So as apps like Chrome and 1Password update to squircle icons, it can be really annoying.

This macro sets the icons back - the catch being you have to acquire the old icon as an image, but as long as you can find an old Mac with the old version of the icon that is a solvable problem. As is it runs once per day, but you could run it manually or whatever.

If the image is stored in your macros it will bloat your macros so you may prefer to store it as a file and reference it from the action instead.

Also note that Mac App Store applications require authentication to change their icon and as such the action will not work for them unfortunately. 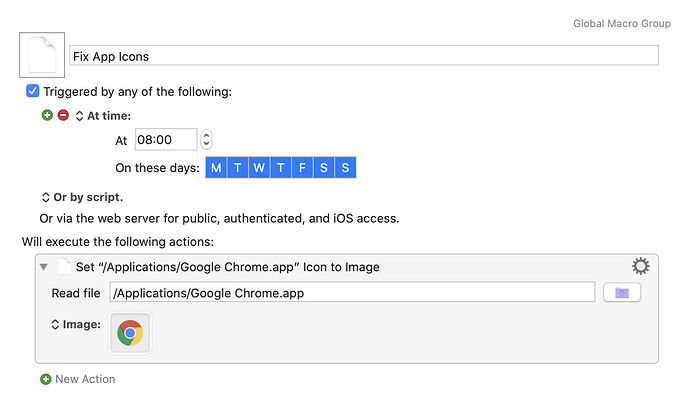 Apple in their infinite asininity and increasingly big-brotherish behavior...

Mini-truth has some questions for you sir

This is a HUGE time saver for me. When I first updated to Big Sur I didn't like that most apps had no been updated so I was making my own icons just for the apps in my dock. Than I stumbled across the site below which as about 4,000 plus Big Sur formatted icons. So I was going though and updating icons about once a week by hand to match, this is a huge timesaver for a cumbersome precess. Thank you!

Replacement icons for iPhone and Mac in the style of macOS Big Sur. Fully open source to encourage the community to contribute to the project