How can I provide a running Macro's Name and UUID to separate Local Variables and use them as Local Parameter Variable for an "Execute a Macro" Action in KM 10?

Since KM10 I have to rework many Macros caused to something that has changed.

For my Setup I then used:

This way I had the ability to set the Sub-Macro up as:

I then used these Infos to switch the routines in the Sub-Macro based on the Main Macro.

Now when I use this kind of approach I get both - the Name and the UUID when using the Token %ExecutingThisMacroUUID% .

What can I do to get the old functionality of my Macros back without using the new Subroutine-Feature ??

I think it would be helpful if you posted up examples of simple macros that exhibit this odd behaviour and I'll do some more testing!

Oh - by the way, to enable using the trigger value as a KM array you can't do this:

Notice the comma and not an ampersand.

Notice the comma and not an ampersand.

Thank you for your reply Taj ( @tiffle ),

I don't use a comma and even not an ampersand.

I set the Variable up as this:

I'll come up with an example later this day on how I set my Macros Up....

even not an ampersand

In order for %TriggerValue[1]% and %TriggerValue[2]% to work properly you need to make %TriggerValue% into a KM array, which you must do by separating the two values with a comma like this:

No that was an description of what I do.

here is a simple setup template for my Description in the OP.

This Macro Group contains two Macros awailable only in KM:
A Main- and a Sub-Macro

Tobias - the file you provided contains only one macro, 01)Main-Macro

fixed the File attachment. It should now contain two macros

You have only one underscore in the variable name - it should be two.

Second error (and this is what I pointed out in post number 4 above): 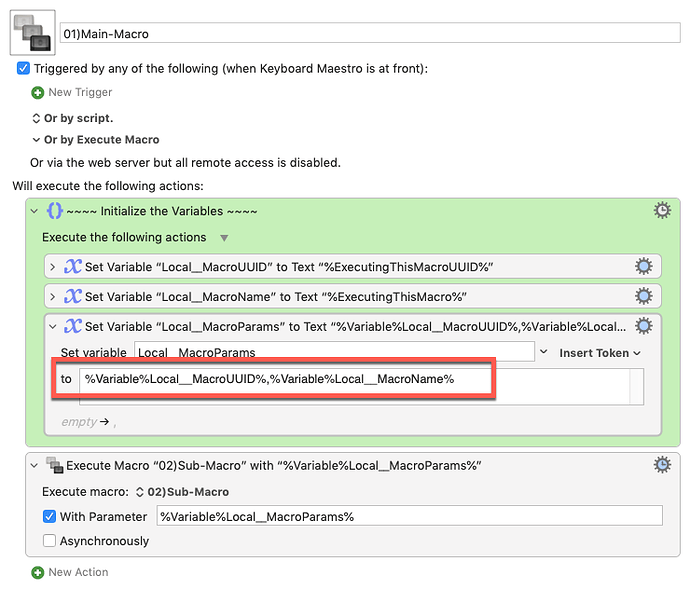 You need to create a KM array using a comma as separator, not a newline as I've shown.

When you remove these errors your test macro gives this output:

If you want to use KM arrays and you're unsure about them, have a look at the KM wiki here (about halfway down the page): manual:Variables [Keyboard Maestro Wiki]

You've nailed it - even with my "underscore mistake".
I don't now how I didn't see that....

I am thinking about a Macro now to avoid such mistakes in the future...

We’ve all made that mistake my friend!