I am trying to copy some email addresses from Airtable and send them emails via the script below. When I copy emails from Airtable they copy on different lines like this:

I suspect I might need to do a little regex to get them into shape to insert them with inverted commas etc as per the script, but my main issue is how to insert them at all. I believe I need to declare them as KM Variables, and them send them to AppleScript? I've seen examples, but don't get it!

Could anyone help please?

Have you had a read of this?

Often when I write a post, it suddenly occurs to me where I should be looking. I had gotten this far: 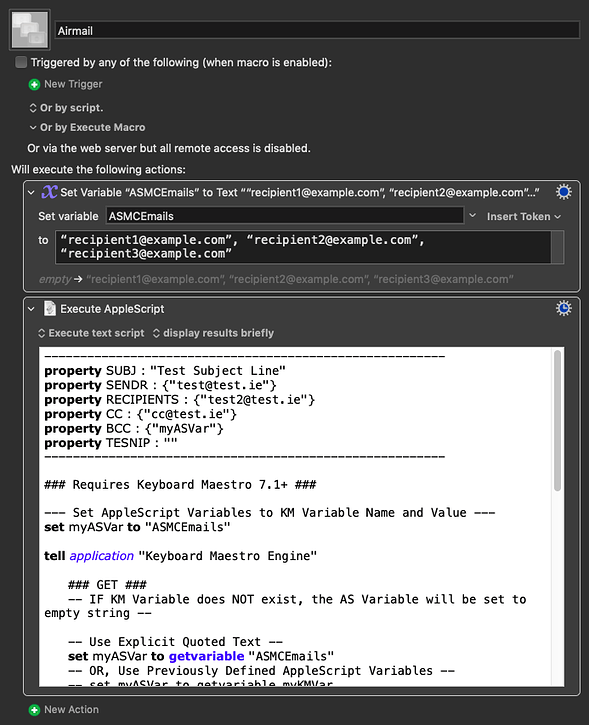 But am having no luck actually inserting it into the appropriate place on the original email. The macro either doesn't run (presumably because it has an error), or in the BBC field it has the variable name, not the actual variables. It's clear the property BCC :{"ASCMCEmails"} is incorrect, but I'm not sure how to correct it.

Edit: Had to update image to remove company info, but had already made edits suggested by @Nige_S

Oh, I'm seeing my variables don't even match up. I should be using MyASVar in the second script. Apologies. I'll work some more on it tomorrow.

No -- it's already text, which is what the "..." signifies in the AppleScript. But in the script it's a list of text items -- you keep the KM variable as you have it in your OP, pass it into the AppleScript, then convert lines of text to items in a list in your AppleScript using

BUT... Each AppleScript action in your macro stands alone -- you can't get the value of ASMCEmails in one AS action then use it in another. Put that bit into the top of your "Airmail" script and see if that helps.

And you've spotted your variables don't match. But as it stands you are filling in the BCCs yet have no "To" recipient -- that greatly increases the chance of the email being treated as spam...

Any further advice. Thanks in advance. 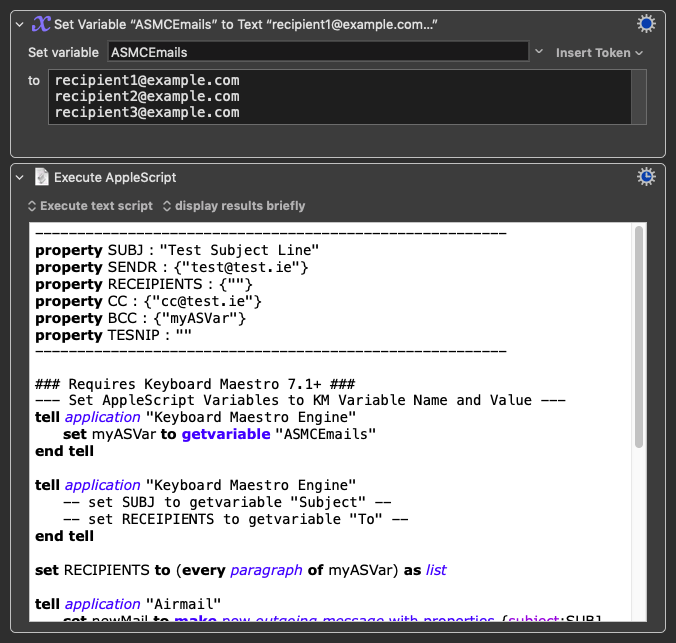 But you've removed the bit where AppleScript sets the value of it's variable myASVar to the value of the KM variable ASMCEmails -- put that back in and that should solve your problem.

I'm presuming that's two separate Variables, one being set to the KM Variable "My KM Var Name" and the other being set to text "TBD"? 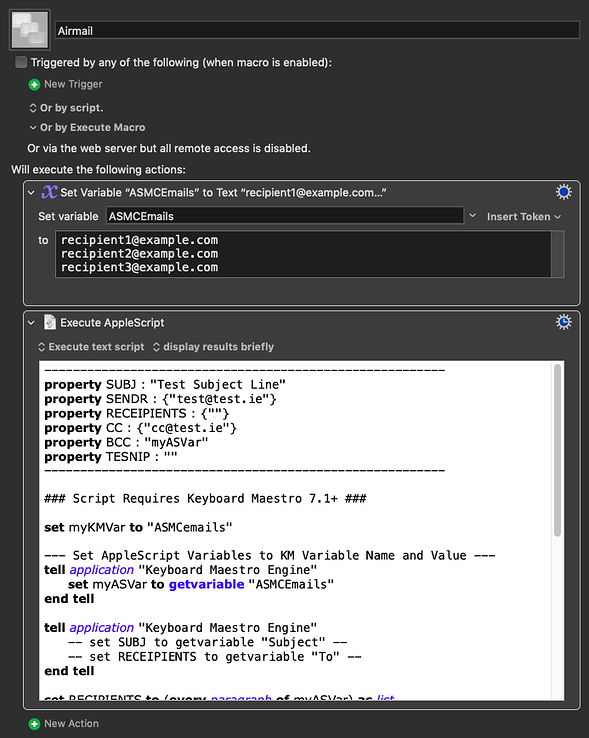 ...sets the property BCC to a list containing the values held by the variable address1 and address2. So it's like

I'm presuming that's two separate Variables, one being set to the KM Variable "My KM Var Name" and the other being set to text "TBD"?

No -- they are both being set to text. myKMVar is now the name of the KM variable you want to use, myASVar has been set to a default text value. You need to look further down the example to see how that text is then used:

AS resolves the value of myKMVar to "My KM Var Name", then gets the contents of KM variable "My KM Var Name" and puts them into myASVar (replacing the previously stored contents).

It appears that Airmail's AppleScript dictionary has improved since last I looked...