Is This (Really?) the Best Way to Wait-And-Click-Found-Image?

I've been reading around for half an hour and trying to determine how to solve a problem:

How do I click the image that I just paused-and-found with "Pause Until"?

The main issue is that I have always just tried to copy the exact image and parameters in the Click action as I have in the Pause Until action. This is fragile though as it's just about impossible to copy the exact "fuzziness" into the second action. It seems there should be a way to just say "ok now click it!"

I've found info on FoundImage though there is some missing info. E.g. the Wiki page says "If you set a Variable (say ImageLoc) to this token, then you may reference individual properties." That seems incomplete at best - how does one set such a variable? If it's set "to text" then the new variable is, like the old one, just text. There must be some other way to set it. For now I'm using a regexp to parse between the commas (left,top,width,height) but that feels pretty clunky.

Ideally, under "move or click mouse" there would just be an option for "midpoint [or whatever point] of last found image" which would be super simple. I would use that dozens of times in my macros.

I believe the Wiki should be updated too to indicate how to set a variable and access those subfields of FoundImage (left, top etc.) because I at least (programmer and experienced user) don't know how after reading it twice - I only got text out of it. There are many ways to "set a variable" so that at least should be specified. I'd update if I knew the answer.

Don't want to seem like I'm complaining too much - KM is great and totally essential for me. Thanks if you can help!

Ok, I believe I found the minimal version in the forums. This does have an extra step of setting a variable - not sure why that would be necessary but it's usable. Here's the link with the exact syntax.

Is there a way to click on the image found in "Pause Until Found Image"? Questions & Suggestions

The issue you're running into is that %FoundImage% is a token, not a variable, and you're trying to use it in ways that only variables can be used. Fortunately, the solution is simple: just set a variable to %FoundImage% and use that in the actions instead, and everything should Just Work™: Use FoundImage in Other Actions.kmactions (24.0 KB) [image] (you'll also notice that I used the .midx and .midy references in a %Calculate% token for the Display Text action, as that's the only way to perf…

Created a helper macro to abstract the slight weirdness here - this definitely is sufficient and plenty convenient. Just running this right after "Pause until found image" clicks the center of the image. 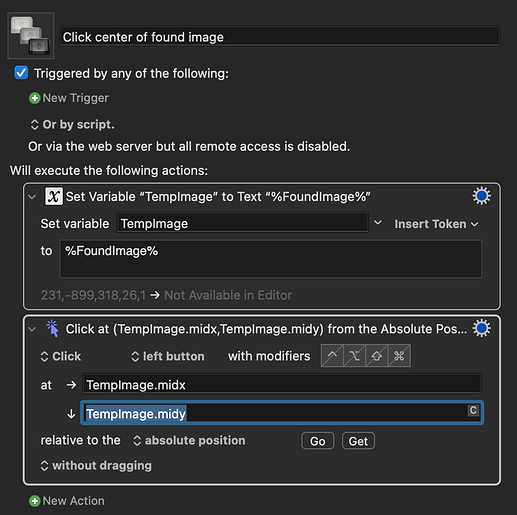