One of my most frequently used Keyboard Maestro macros has suddenly started causing OmniFocus 3 to crash…but only when OF3 is in full-screen mode.

My problem started sometime during the week of September 23. Basically, a macro that I have used for many months started having weird interaction effects with OF3 and LaunchBar. Exactly what happens might vary slightly on each occurrence, but basically somewhere during the first or second step of the macro, LaunchBar somehow gets invoked and one or two steps will run, pasting text into the LaunchBar window. After these one or two steps, my screen shifts away from the full-screen OF3, which has crashed at this point, the frontmost window becomes the OF3 crash reporter, and the remaining steps get pasted into this crash report window.

To be clear: I changed absolutely nothing with this macro to kick off the problem, and/but I still tried reverting to previous versions using "Revert Macros", just to be sure. No dice.

A couple of points about this macro, as it exists, presently. After the problem started, I inserted a bunch of one second pauses as I went through troubleshooting (the macro did not have these, originally), enabling steps one by one, to try and keep the macro from invoking LaunchBar. It would work up until about the third or fourth step, sometimes a little further, before failing. I also used a condition that would keep the macro from proceeding if LaunchBar was the frontmost window. Since LaunchBar is mostly modal, this did not work (I left it in, anyways, just to help illustrate what I have done, for better or worse).

Other macros (used to generate plain text for medical reports) were causing similar problems — invoking LaunchBar, namely — but I fixed these by changing instances of "Insert text by pasting" to "insert text by typing." That fix did not work with the OF3 macro. Again, I should point out that this is only a problem when OF3 is in full screen mode; Keyboard Maestro, OF3, and LaunchBar play nicely when OF3 is not in full screen mode.

I am at kind of a loss here. I have done all the troubleshooting that I can think of. Anyone else having similar problems and/or have any ideas? I am probably posting this at the exact wrong time, by the way, since I'm about to go in for an outpatient surgical procedure that will take me out for the rest of the day. So, if anybody posts any responses, please don't be offended if I don't respond right away. It will probably be tomorrow morning before I am back at it.

By the way, this is the source of the macro's name. Just in case anyone was wondering. 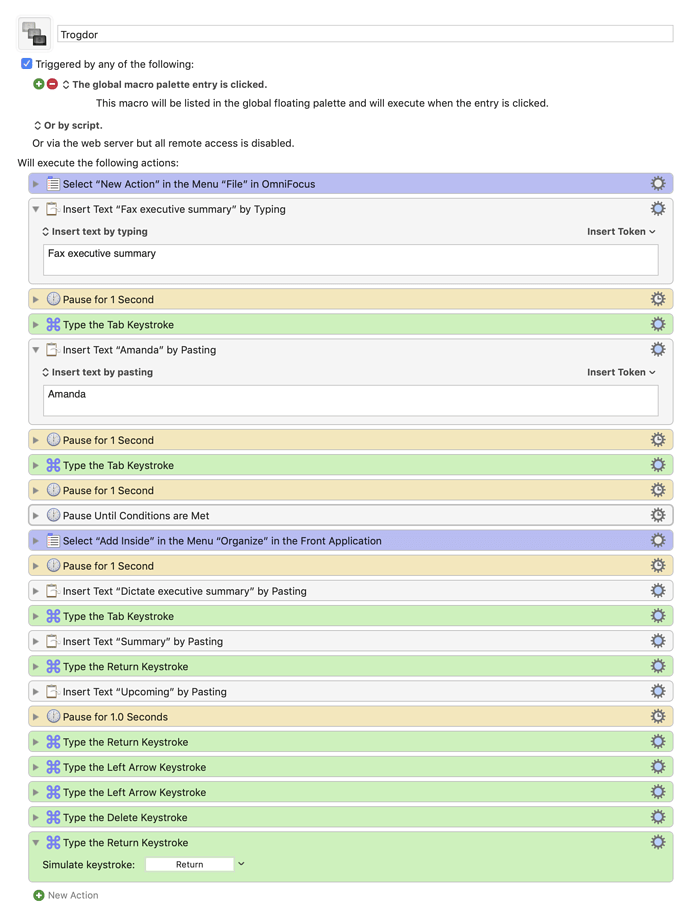 If LaunchBar is being activated, you will need to look at your LaunchBar activate settings and see what could possibly be inducing that to happen.

It sounds like LaunchBar is being triggered by Keyboard Maestro simulating keys, maybe simulating the ⌘V.

I will reach out to OmniFocus Support; I have sent several crash logs already. Hopefully that will yield something.

So, with LaunchBar, then, I still don't know why it was never activated by this macro — prior to two weeks ago — but suddenly starts getting activated. Again, I was running this macro maybe a couple of times per day for months with no issue. I did adjust the "Retype Delay" setting in LaunchBar, hoping that would make some difference, but it did not. It's also worth noting again that LaunchBar is what gets activated before OF3 crashes.

Perhaps LaunchBar was updated? Nothing in Keyboard Maestro’s key simulations has changed recently.