My 94 year old mother has a 27" imac in her room and lives 200 miles from me. I facetime with her every day and for the past year or so I log onto her computer remotely using Apple Remote Desktop) and answer my own facetime call so that we can talk and see each other.

The only problem is that whenever there is a power failure or her computer restarts the ip address changes and I can no longer log on remotely. Up until a few months ago, I could phone her and walk her through the process to give me the new ip address. Lately this has not worked as well due to her age.

Today I used Keyboard Maestro to do the following (see attached). Whenever the computer restarts (and I have set it to start up every day at 5 am) an apple script application runs that uses the Keyboard Maestro file to:

I can then open my dropbox folder and get the new ip address. 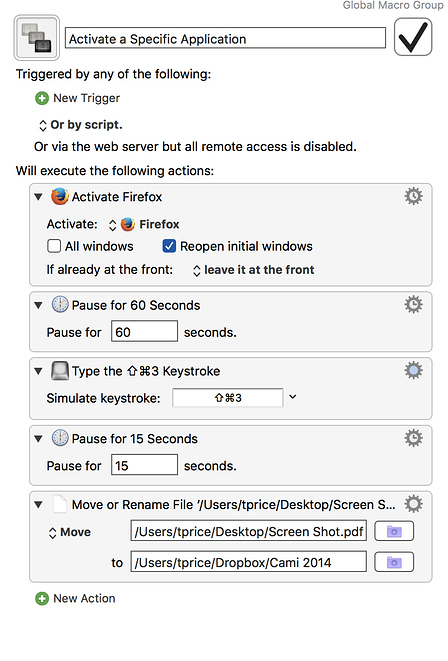 You could simplify it quite a bit though.

Thanks Chris. This is a little over my head but I will play with it a bit tomorrow. I do not understand what the script does

I do not understand what the script does

It directly saves the public IP address to a dated file in Dropbox and avoids having to monkey around with browsers and screenshots.

This will create a new dated file every time it runs, but you could create 1 file and append to it.

By the way most routers would let you nail in place specific devices’ IP addresses. What I’m not sure about is whether that would be visible externally.

Some years ago I’ve written an AppleScript to constantly log the external IP address.

You can get it here:

Keep a History of your External IP Addresses – dFlect

Sometimes it can be useful to have a history of the dynamic WAN IP addresses. This little script for OS X will log your external IPs in the background.

When I.P. Changes from yesterday it will Text me and save to log...

This script works good for me...
If you would like the source please just ask...

This script works good for me…

As far as I can see the initial curl command is all you need, because it always produces a plain IP-address (at least in my testing).

If you do need to filter out just non-digit and non-. characters then it’s simpler to use negation.

The caret character ^ when used at the beginning of a range [^…] means NOT.

And by piping the curl result directly to sed you can avoid messing about with temp files on-disk.

NOTE — in your AppleScript the delay command is unnecessary, because execution of the script waits until the result is returned from the do shell script command before moving on to the next statement.

Thank you VERY much Chis. I have duplicated what you have suggested and set it up on my mother’s iMac to save her IP Address every 6 hours into a shared folder in her dropbox. I also created an apple script application that will run whenever her computer reboots. This will also save the IP Address into the dropbox folder.

This is very neat and it will encourage me to play with KM more.

Whilst I know this is a KM site, sometimes a screw is a screw, and a hammer won't work...

In view of that, wouldn't an easier option be to set up a DynDNS client on her PC and use the DNS name instead?

No-IP for instance has free accounts for up to 3 DNS names, with a few other restrictions, the worst of which is the requirement to confirm the account every 30 days...

Another option that would drop the requirement for logging IPs would be to set up a zerotier network. It's a bit like a VPN, end-to-end encrypted, and is easier to set up than it would appear.

The result is that you're both assigned IP addresses on that zerotier network, and you'll both be on the same virtual LAN -- it'll feel as if your computer's are on the same local network. Multicast and broadcast work over zerotier by default, so you'd see your Mom's computer in the 'Network' section of a Finder window and could choose to establish a screen sharing or file sharing connection right then and there. You'd never again need to know the IP address her internet provider has assigned her.

Whilst I am surprised that you have resurrected and old thread,
I am very grateful as Zerotier looks really interesting.
Zerotier appears to be very simple but an extremely neat solution.

I learned a lot of useful, thank you