Is it possible to store a variable from the button choice of the user input, from the "prompt for user input"?

If you want to be able to return the 'Cancel' button result then you have to uncheck 'Cancel Macro'.

Need your expertise on a macro I've been using for the past few months. I use this macro to plan the day with the calendar and the To-do app side by side.

I trigger the macro using ''Periodically while logged in'' every 1 hour during morning and evening time. Lately it's getting a bit annoying to cancel the macro every few hour.

What's the best way to achieve this ? 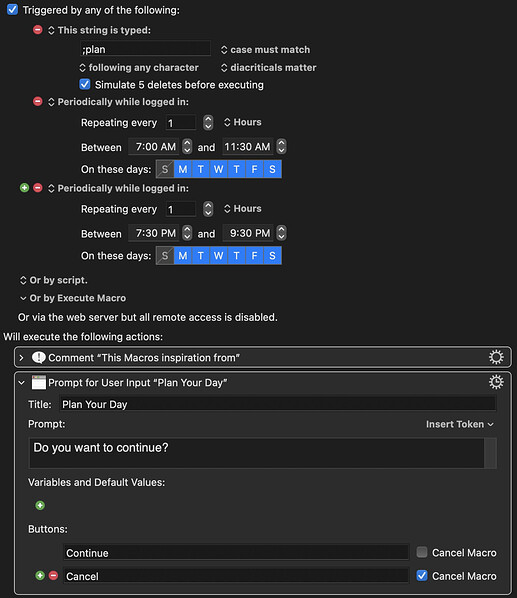 What's the best way to achieve this ?

Do you still want to be able to use the typed string trigger, even when you've cancelled the periodic trigger for the rest of that session?

I use the set of actions below to establish if my backup macros have run during the last 24 hours, and if not then continue, but if so then to cancel.

You could likely adapt this to your needs.

Run this macro only if not ran in the last day.kmmacros (4.7 KB)

That seems like the simplest way to adapt your existing macro.

Which is important, because it means you can't disable the macro via the dialog (then re-enable just before the next "periodic section" is due to start).

Which leaves you with @ccstone's suggestion of maintaining a global variable as a flag and aborting the macro when that variable is a certain value. Have a go at it first, but shout out if you are having difficulties.

It's a bad practice to use type-string-triggers for anything but text-substitution macros...

So I did this based on your macro provided (Thanks).

Yes, the TriggerBase token [Keyboard Maestro Wiki] returns what kind of trigger started the macro’s execution. It is a very handy token for macros that you want to trigger using more than one trigger, such as periodic and hotkey, or something to that effect.

I’m not quite sure I follow what you mean by “receptive”, but there’s no issue with where you have that variable in your macro... however, I just realized that you don’t even need that variable. You can use the NOW() token directly in the the calculations. See this updated example below:

Thanks, This is been working pretty good.

Glad to hear. Feel free to mark whichever post you feel most appropriate as the “solution” so others can see it’s been resolved.