Quickly Expand The Selection To A Given Letter

After reading this: How Do I Get the Position of a Character in a String using KM Actions? - #3 by JMichaelTX I came up with this macro:

I have two questions:

For the first question (task) I can perhaps use The “Follow Menu Choice with Return” Macro created by @August Mohr? I’ll have to download and study it, once I’m back at my Mac.

I'd also like to know if it's possible to do that. But as I understand it right now, with KM you don't ask a user for a character of input, rather you let the key be the trigger for a macro. The macro I screenshotted in the post that you linked contains an image of the trigger that you would need to use. If you do that, you can access the value of the keypresses using the %TriggerValue% token. It's a different way of thinking, and may require you to rewrite your code.

How can I make this macro repetitive? So first the selection is expanded to the first 'r', then further to the second 'r' in the input box, etc.

A loop requires to know when to stop. When are you planning to stop the repetition you speak of?

@Sleepy made some suggestions for how to improve my macro that may make it faster and simpler and also may help avoid the glitch/error that I described at the end. I'll let you know when I update it, which should be in just a day or two.

And then allow the user to collect the key via the %ActionResult% token or a new token?

That would open up a whole new horizon of trigger options...

The answer may depend on whether we're asking about ascii keys or USB key codes. I'm not sure which one is more desirable to have, nor am I sure which one is easier to implement. I'm inclined to choose the latter, but then if we want to know which character was pressed (via ActionResult?), then the result would likely end up being strings like "CTRL-CMD-F10". If we chose ascii keys then the result could be a single character.

Keyboard Maestro cannot detect all keys without either setting hot keys, or them producing key events, neither of which is practical or sufficiently generic.

@Sleepy I've come up with a solution without a loop:

I've posted the macro here: Quickly select up to a given character (repeatable)

is it possible to create 26 shortcuts: CMD+/+letter and 26 case conditions?

It may depend what your question means.

Thanks for your clarification! I thought that it would be option 3 and after some thinking I remembered a macro of @cdthomer where several hot keys can be used, and depending on the one that is used, a different action will be taken. (The Aspell macro)

So I tried this: 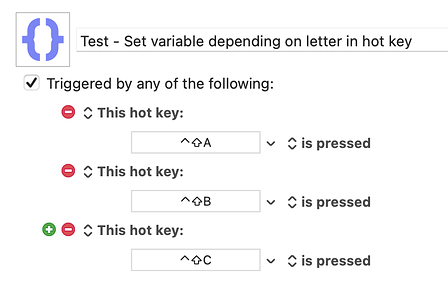 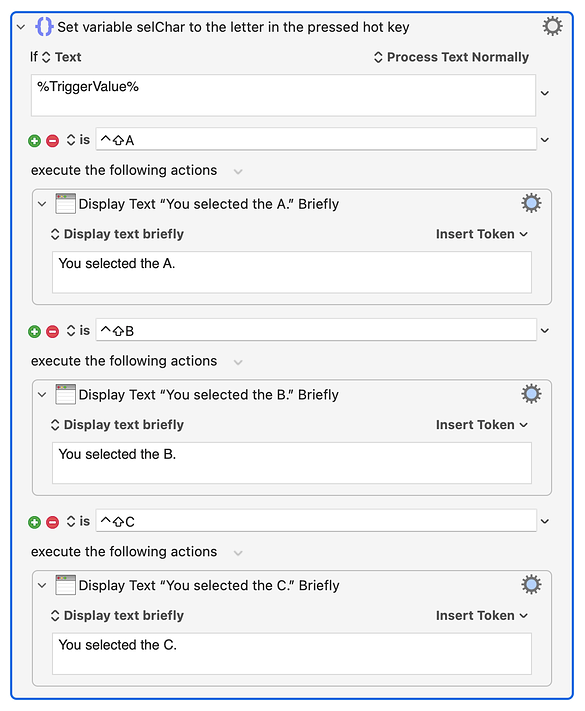 And it works. I can use this to avoid the Prompt dialogue box in my Quick selection macro.

Your code illustrates some of the things we would have to do to get multi-key hotkeys to work. If you're happy with this solution, we're all happy.

Actually, this sort of problem comes up so often, I've been thinking of a fancy new macro that handles all hotkeys including multi-key hotkeys. It would basically be a macro that intercepts all possible hotkeys, and using a dataset that the user prepares (probably a dictionary) it triggers the appropriate macro using a level of indirection. A user would probably set up hotkeys like this: 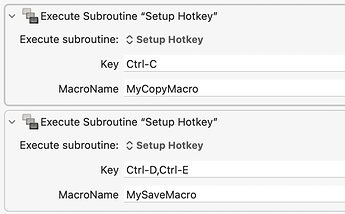 The main downside to this is that it would be the ONLY macro a user could use to set up a hotkey. If the user tried to set up any other macro to use a hotkey, then the KM palette would pop up, which cancels the automation. Basically I would be replacing KM's ability to process hotkeys with a single macro that emulates it. I'm not sure if people would want this sort of thing.

As far as I know there is no available method at present.

This would require quite a bit of set-up by the user when covering many keys, but it would offer a lot of functionality and could be reused once created.

No, there is no reporting on which condition of an “any” caused the condition to succeed. It doesn't really work in general, since for all/none variants there would be no specific matching condition, and for the others it could be one or more than match, and so the results would be indeterminate since they are all tested in parallel.

I was hoping it'd be relatively easy to create a means to avoid that level of complexity. Most user's won't go there.

You can read Peter's answer above for one quite complex method.

The other more simple method that I can think of is to create a conflict palette.

So your main macro when activated pops up a conflict palette with as many letter choices as you want.

The letter is returned to the main macro when you press the key, and the macro continues.

Currently I'm musing over another approach, of which I'm not sure that it's possible:

I’ve updated my macro and I think it does what you want. When I use it I type shift + command + control + S and that pops up a Pick With List menu. The list is organized, as you have previously suggested, with a unique single letter at the beginning of every line.

Immediately before the PWL menu, I run Activate Macro Group for one action which activates a dedicated group. The group contains one macro, which has 48 triggers for the single action which outputs the trigger value followed by Return.

add a final action to the quick expansion macro where it disables itself (to free all the hot keys used).

I tried that approach in my earlier version of "Follow Menu Choice With Return". It worked OK, but every once in a while the macro got interrupted, didn't run properly, and so didn't disable itself. That was awkward when then triggers were normal text characters.

My newer version puts FMCWR into a dedicated group that gets activated for one action only. That avoids the problem of how to disable the hotkey set.