I'm trying to write a text-replacement regex that will take the typo "rpo" followed by any word character and replace the "rpo" portion with "pro" (and followed by the that arbitrary \w character). I tried this regex as the triggering string:
rpo\w

But that match includes the \w character and overwrites it, so "rpod" is replaced with "pro" rather than "prod".

Also tried a look-ahead:
(rpo)(?>[cd]) and then experimented with %TriggerValue% but couldn't find a way to just capture the look-ahead capture group.

By the way, I the above may not be a "look ahead" which I thought used an equals instead: (?=[cd]) but this didn't take any action.

I tried this regex as the triggering string:
rpo\w 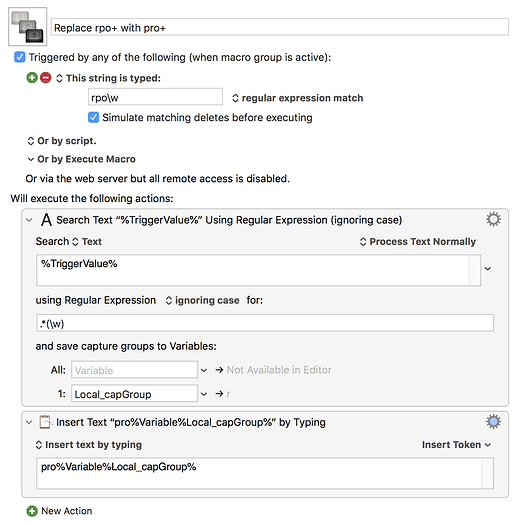 In fact, "Search text" regex can be .*(.) -- just the last character, since you did the "is a word char" check in the trigger -- and you don't even need a regex but can use a "Substring" action instead:

It's good practice to use the explicit %Variable%<VariableName>% token in text fields to avoid accidents. From the manual:

You can also use a short form of just %Variable Name% to include variables as long as the variable exists and has a value and there is no corresponding text token, although generally it is better and clearer to use the longer form %Variable%Variable Name%.

Not a clue -- it does work in a KM regex Search and Replace though.