Hello,
I use Finder with 2 windows occupying the right and left 1/2 of the screen to emulate dual browser mode. Sometimes I get my windows wrong: the right is on the left side and vis versa.
For the moment I use Moom to put split the 2 windows into right and left half.
I looked at the KBM window actions:

PS I can't select or bring to front a window with a specific name, because the name is always changing as I navigate folders

Here's how to do it with Keyboard Maestro native actions:

Here's how to do it with AppleScript which is a trifle smoother:

The apple script in a macro works fine, not the KBM actions. thank you very much

I edited your script to bypass Moom and do everything with KBM.

The macro below should take the 2 finder windows and places one on the left and the other on the right, but it does not work.

thanks again very much 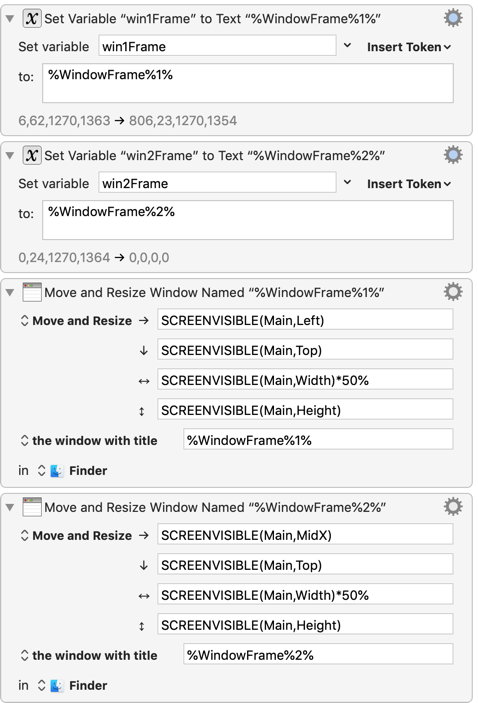 I would also like to ask you if you can recommend an alternative to Finder (except for Pathfinder). thanks

The apple script in a macro works fine, not the KBM actions.

The Keyboard Maestro macro didn't work at all?

I wonder if it has something to do with the window title.

Well, yes – you've mistaken the window frame for a title. Look at the contents of the variable.

You need to talk to the windows with indexes 1 and 2.

Moom adds a little gutter between the 2 windows to clearly distinguish them which I find elegant. Is there an easy way to do that?

It's all in the calculations – Moom only makes it look easy.

I would like to create a 3rd macro which simply toggles between the 2 windows. Which action do you suggest I use ?

f you can recommend an alternative to Finder (except for Pathfinder).

You could take a look at ForkLift, but it's not scriptable at all.

There are some other File-Commander type apps like Commander One (PRO).

What version of Path Finder are you dissatisfied with?

I meant focus, and I think that I have a solution.
thanks again

because dropbox is essential for me. I had all kinds of problems with the implementation of smart sync (which I admit is impressive). Many dropbox chat support sessions.

They recommend not linking PF with dropbox. I contacted PF support and they admitted (to their credit) that reverse engineering the dropbox configuration files is quite a challenge.

You are right: I am probably overreacting. I have been using PF for years. Just frustrated that because of dropbox, I sometimes use PF, other times Finder which I don't like. That's why I have to create this palette to emulate PF's dual browser mode. Everything is easier in PF, including simple tasks like renaming, copy all kinds of paths, etc.

I am curious: someone brilliant like you. Are you using Drafts app IOS ? The is a Mac version but it is basic. An amazing app in terms of intelligence and flexibility on the IOS platform.

You could take a look at ForkLift , but it's not scriptable at all.

Attention with Forklift. It is still unable to handle Finder comments:

I’ve sent a bug report about this to binarynights in 2017, and they have acknowledged the issue.

But, with Forklift 3.3.4 it still seems to be unaddressed. So, strictly spoken, FL is not macOS compatible.

Of course, if you never use comments, this will not be an issue. However, for an app that works on Finder level, I would expect that it makes use of the most basic functions of the available frameworks.

I tested commander one, and it seems to be able to copy only one path. With Pathfinder, there are many choices and I find it very useful 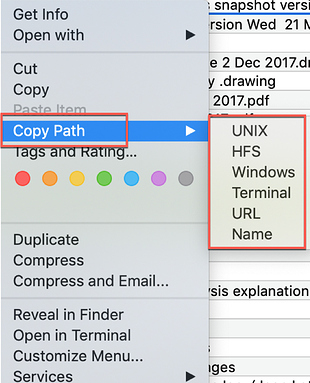 @ronald, since you have replied directly to my post above: With the Comments issue I was referring only to Forklift. Path Finder seems to handle comments fine, Commander One, I don’t know.

I just got the reply from forklift:

after all that research i have come to 2 conclusions:

With Pathfinder, there are many choices and I find it very useful

Is this really that useful?

Normally you use a quoted path in the Terminal. This is either PF’s “UNIX” or “Terminal” path, I don’t know. And the backslash-escaped one will then be the other one.

HFS can come in handy, but if you are using Script Debugger you get any desired path formatting any way. But it’s not useless.

URL: Can be handy, but they missed the chance to add a file reference URL option here. This would have been a great and (probably) unique thing.

I just got the reply from forklift:

Any more details on that reply?

You can't add comments in ForkLift. This is already on our feature request list and we will try to make this possible in the future

Wow, great. So, the same as 2017. My recommendation: forget that company.

Not that I’m overly aggressive, but leaving out such a basic feature – purposely – over at least 2 years, tells a lot.

I know, Forklift started out with integration of FTP, SFTP, webDAV into a Finder-like experience. And they are still good at that.

But at some point they started to claim “Finder” territory (like PF or others), and they had some good ideas.

For example the integration of some often used shell commands into a menu.

But: already there they stopped at half way: You can add a command to the menu, but you cannot change the order (in the menu) afterwards. For example to drag the favorite commands to the top. No way. WTH!? What is a chronological order (of when I have added the commands) good for?! Good feature, but born dead and never fixed. (as far as I know).

This is minor. And the non-working-Comments thingy is some leagues above. But both show that those folks don’t know/care much about what they are doing.

Sorry for the negative vibes.

I wrote to Pathfinder requesting that they consider adding it to the list of copy → paths, and I added the link which you provide above.
I will let you know what the answer.

Curious to learn what they are thinking. Or if it poses major problems to implement it.

BTW, it’s not “my” file reference URL. It’s very well documented, for example here or on other pages on that site, as well as on StackOverflow.