Tip: Using a Macro as Both a Subroutine and "Execute Macro with Parameter"

Did you know you can have a "sub-macro" that works both as a normal "Execute Macro with Parameter" action, and as a KM10's new "Execute Subroutine" macro?

You might wonder why you'd ever want to do such a thing. Well, in my case, I love the new Subroutine feature, but I have a lot of existing "sub-macros" that use %TriggerValue%, and I don't want to change every place that uses them. But I'll be using them again in future macros, so I'd like to be able to use them as Subroutines too.

For a lot of my sub-macros, I'll just leave them as-is, especially if they only have one parameter. But I thought I'd experiment with having an existing sub-macro use both ways of passing parameters, to see how well it works.

And you know what? It works perfectly, and it's easy!

It takes 2 parameters, separated by a pipe ("|") character.

Here's how I changed it. I added the "subroutine" triggers to the macro: 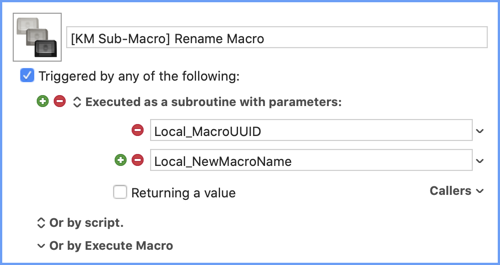 These are the variables I already parse %TriggerValue% into. I'll talk more about this in a moment.

Now all I have to do is enclose my existing "Parse TriggerValue" code in an "if" action (the green part): 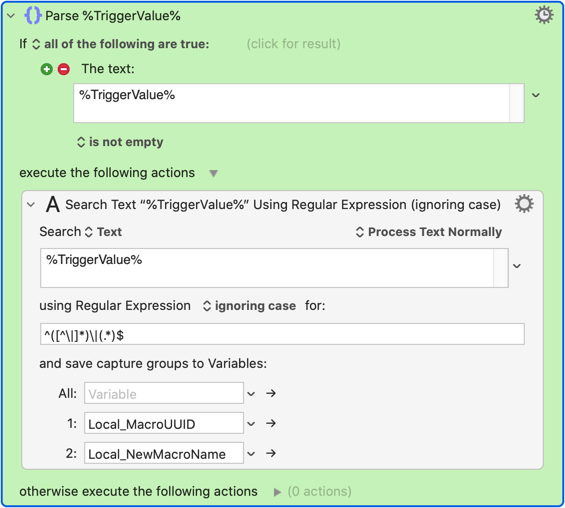 and validate the parameters if I want to: 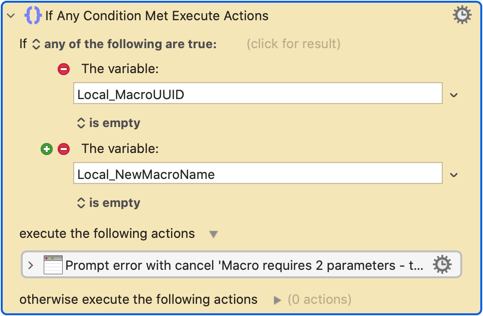 Way easier to understand than the single parameter with the pipe character. Yes, the parameter names are a little odd with leading underscores, but it's really easy to ignore them. If I wanted to, I could have named the parameters like this: 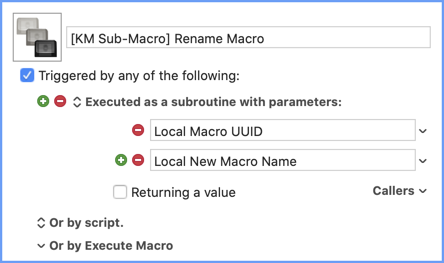 I haven't addressed the issue of return values, because I'm pretty sure I'll leave as is, but time will tell.

If you've managed to read this far, I hoped this helped.

Thanks, Dan.
I pondered on this before but did not come up with a good solution. This is great.

the parameter names are a little odd with leading underscores,

From this forum I learned to use TWO underscores between "local"/"instance" and the variable name: "local__Var". The leading underscores will not show up. I know this does not solve existing single score variable issues, but it might be helpful to other forum users.