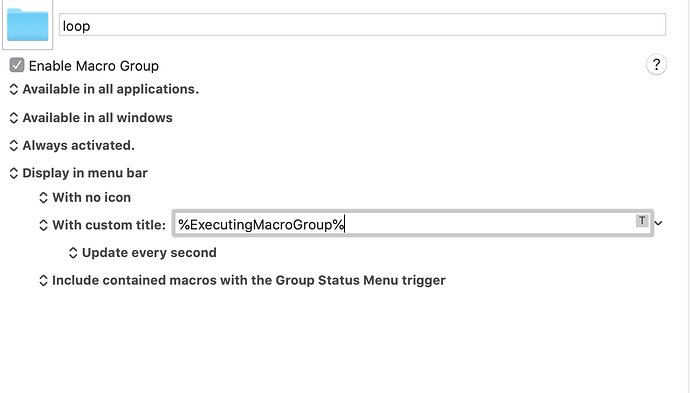 I am not sure i did it right the way ? Tokens like %LongDate% or %MacName% are working just fine

thx for your help
Christian

I'm no expert at this, so there's a 20% chance I'm wrong, but I think I can see the reason. You see, LongDate and MacName can be evaluated independently of what macros are running. But ExecutingMacroGroup requires that a macro be running first in order to evaluate it, and there are NO macros running when you enter that token in that field, so it can't be evaluated. That's my theory, and I think there's an 80% chance I'm right. If you try to explain what problem you are trying to solve, maybe we can find a solution for you.

Yes, naturally the token %ExecutingMacro% can be written to a file, because in order to write anything to a file, a macro must be running. That's why it works there. You want it to also be displayed in the menu Bar, but perhaps the reason it isn't is because the names of all running macros are already displayed in the menu bar if you hover the mouse over the Cancel menu item. In theory I can almost see that it could be handy where you want it, but since the names of macros that are running appear and disappear several times per second for some users, that would make every menu item under it to be completely unclickable because the menu items would be bouncing up and down. How would you address that problem?

There is another way you could solve this, I think. If all the actions in your macros were surrounded by a Group action, you could name the group action with the same name as the macro, and then when you open the Debugger you would see the names of all your running macros in there. Actually, that's not a bad idea and I may modify my macros to work that way, because the debugger doesn't show that information, I think. Maybe it should, then we wouldn't have to do this.

and there are NO macros running when you enter that token in that field, so it can't be evaluated

and if there are several macros running, @block6, what would it evaluate to?

It doesn't say so in the KM wiki, but I suspect that all the tokens that identify the "currently running macro/group" only have meaning when used within an actual macro. Just my guess...