Noob to posting here and KM in general. I searched and didn't see this mentioned...

I've recently been using the Touch Portal app to create "buttons" on my iPad, which then trigger basic things such as opening a new window in Safari, opening to Google, opening to finder etc on my Mac. Tonight it dawned on me that I could use Touch Portal to trigger hot keys or string triggers in KM. Works great.

My Macbook Pro is usually docked, and by using an iPad Mini in front of my keyboard with Touch Portal, its basically like a big, macro launching Touch Bar. I have Cerebral Palsy, and my fine motor skills are lacking a bit. I find this much easier than trying to trigger hot keys or string triggers, and I don't always like having palettes open on the desktop.

I especially like the ability to customize the icons of the "buttons" with any image of your choice. The free version only allows for one page (think palette) of "buttons", and the paid version allows for creation of unlimited pages that you can name and customize to your liking.

Included a screenshot of example buttons I created with Touch Portal on iPad Mini, a shot of the setup in front of keyboard/monitor, and a gif of me tapping the button I setup to launch a new window in Safari as an example. Triggers are instantaneous. No affiliation with the app at all, just adding a suggestion I hadn't seen mentioned. Touch Portal for Mac can be found via Google, and the companion app is found in the App Store. Both your Mac and phone/tablet must be connected to the same network. Interested to know if anyone else uses this or tries it out! 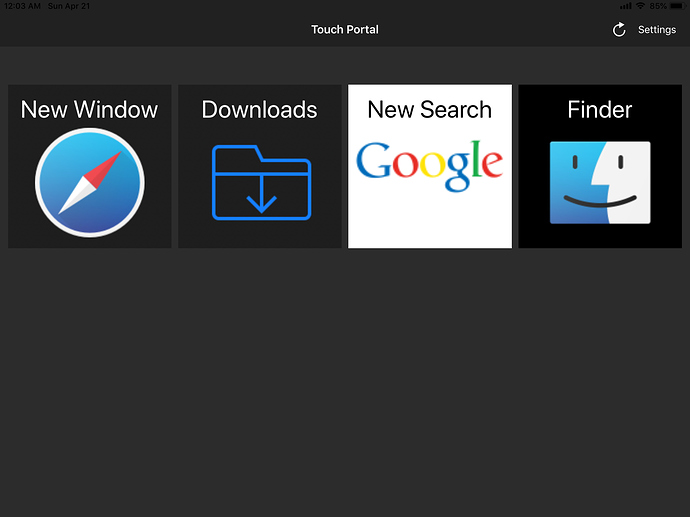 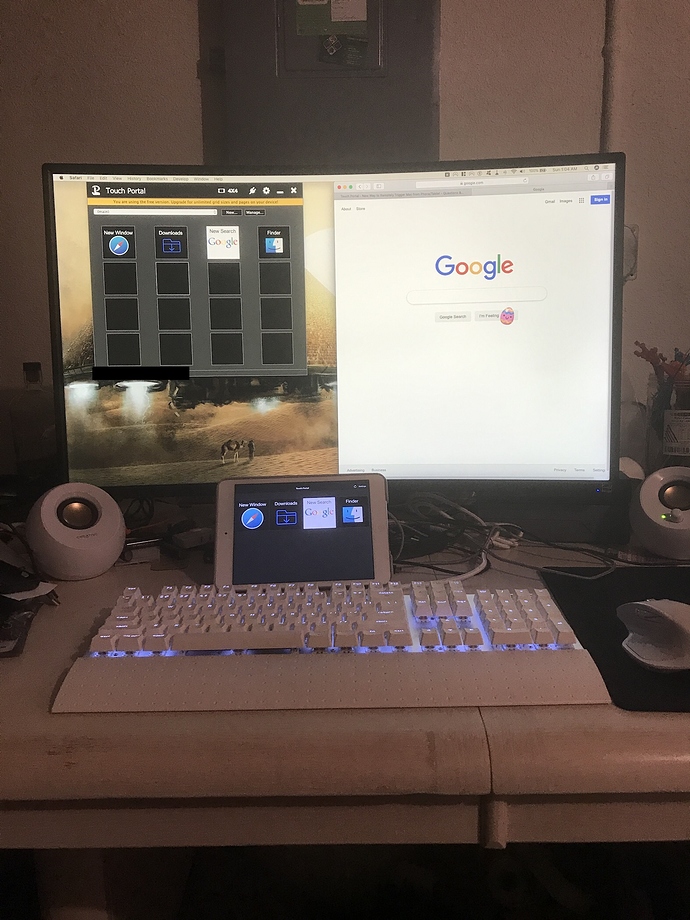 Both your Mac and phone/tablet must be connected to the same network. Interested to know if anyone else uses this or tries it out!

Hi @LimpinAintEZ, thanks for the tip. Years ago I had installed a similar app called "Actions for iPad" and later "Quattro". Due to exaggerated subscription prices, this app doesn't do well anymore.

A free alternative is Apple's own Shortcuts app. In this article just an example how I lock and unlock my Macs via Siri and Keyboard Maestro. This can be done via a voice command as well as via the Touch in the Shortcuts app

Hello KM User, I have created a Siri shortcut on the iPhone that I can use to run KM macros on my Macs. In my example I use such a Siri shortcut to login on my Mac with my user password. Login.kmmacros (39,0 KB) [Login] You can find instructions how to set up the Siri shortcut in this video here... Please excuse the English. It's not my strength, I created voice executions with ScreenFlow. [CloudApp] Note: In the video I refer to the IP address. Y…

When I mirror my macOS to the TV via Air Play, I use the BTT Remote App, because I can also make text entries with it and have a cursor control available.
The setup and functionality is however identical to the Shortcuts app.

The possibilities in combination with Keyboard Maestro are simply ingenious, because you can only use the AppleScript of the macro and later change the macro as you like, without having to change the carrier (Applescript).

Cool app... I will have to check this out. I use Stream Deck for the majority of my KM macros. It's quite an amazing piece of hardware. Very customizable and it switches to different screens per application so it works perfectly with KM (I do not use it for streaming). With Stream Deck, take full control of your content and focus on what matters most: your audience.

I actually found this app while looking at articles related the the Stream Deck. A Stream Deck is definitely on my Want List, just can't justify the expense currently. Touch Portal is a solid "Poor Man" / mobile alternative though!