I have been using TouchPortal for some time. It turns a mobile device (iOS or Android) into an external button pad with up to something like 108 buttons and sliders and as many screens as you want. The app itself can be programmed to do a great deal, but in particular it is very straightforward to use with KM. "KM integration" amounts to using a custom URL trigger or .kmtrigger file to launch the macro of your choice. If you happen to have an old iPad that you can dedicate to the purpose (and who doesn't?) the software is also a lot less expensive than a Stream Deck. At the very least, TouchPortal is a low-cost alternative.

While Stream Deck is very well known and very popular among Mac automators and explicitly supported by KM, discussion of TouchPortal is rare. I suspect this is mostly because of familiarity, but since I've never used a Stream Deck I don't know. I wonder if anyone who has used both would offer a few comments comparing the two.

As an example of what TouchPortal looks like, here is my current Obsidian control screen with things like workspace managers, launchers for macros under development, and some other generally useful stuff along the bottom and right. Among other things I have the launcher set up so that if I touch the "Edit Macro/Open Documentation" button before touching a macro trigger it opens that macro in the editor. 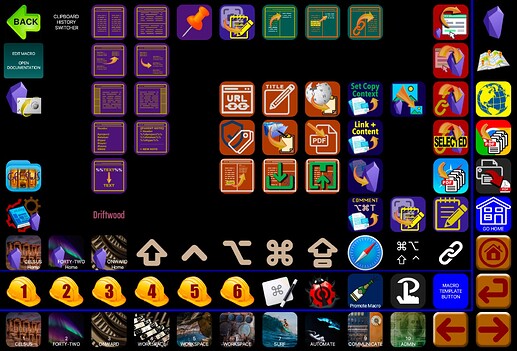 not mentioned much, but Touch Portal is way cheaper

For me it comes down to the physical keys. The SD keys feel great and you don't have to be looking at them to feel your way to the right one. There are advantages to things like TouchPortal though, like having wayyyy more buttons available, so it depends what's important to you. For me, I like only having 15 buttons, as it forces me to be efficient and I think that if I had a big screen full of possibilities, I'd constantly find myself searching through the screen for the thing I want. But that's just me.

Great point about the physical Stream Deck, you can learn where any physical button is, without having to look at the screen.

For those of us who use a Wacom Tablet works well with KM. The 8 buttons, Touch Ring and Stylus Rocker switch can all be a macro trigger.