Here's an improved version that can be used when you're not in a text field. 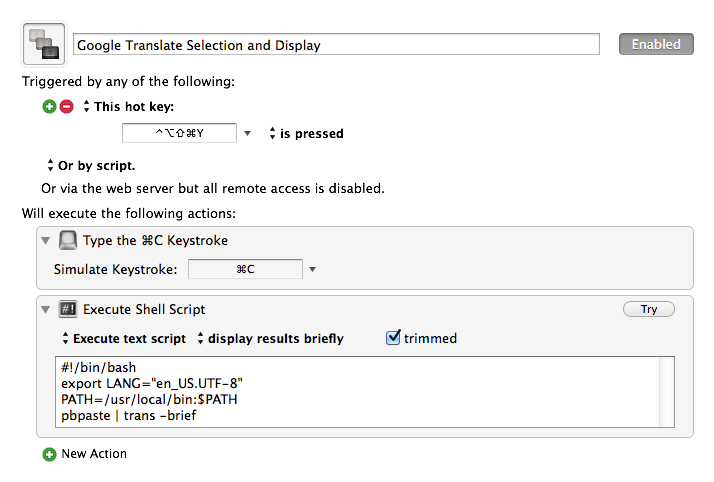 Before I run down a rabbit hole, I assume that I need the translate-shell to be installed for this, with Homebrew, etc. (of which I currently have no knowledge other than what I am reading here…

Is there a KM self-contained way to pull this off (e.g., the bash script can be in KM, etc.). I guess with everything else on my plate, not looking to go installing libraries, troubleshooting path issues, etc., if I can ignore it.

On github, there are a number of examples of command-line interfaces for google translate. If they’re easier to use, they tend to have dependencies that make homebrew very useful for installation. This python script may fit into a single KM macro: https://github.com/terryyin/google-translate-python . But homebrew is worth the time if you use the terminal at all.

As I suspected, I tried yesterday and things started going wacko. For example, I would get to the last step and it would fail. I do a lot of work with translations so my gut feeling is that this in fact IS worth my time to figure out.

I’ll report back with my success, or my lack thereof…

As I suspected, I tried yesterday and things started going wacko.

I spent quite a while last night wrestling with that bash script. I got it working within a few minutes, but I couldn't get consistent results from KM when switching from words to phrases.

On the other hand I just downloaded the Python script Keith posted, and it's working quite well.

I put it in /usr/local/bin/ and made it executable: 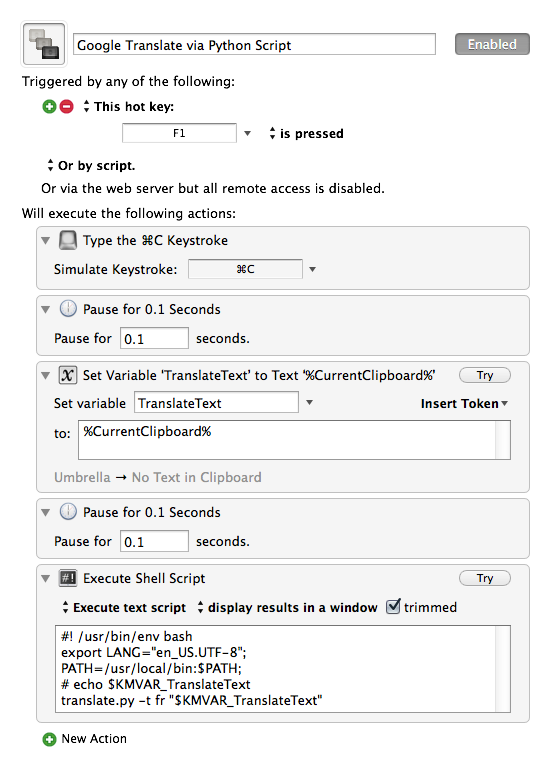 At the moment I have it set to translate to French, but that's easy to change.

The bash script is almost 2000 lines and designed to run from the Terminal. This Python script is 70 and is a little more agnostic.

Including the time it took me to build the macro, the Python script took me about 10 minutes to get working.

I do much translation from English to Welsh.

I’ve got the above KM macro working, with 2 problems.

2 Everytime the text to translate has a ’ character in it, it comes back as ’

Any help much appreciated as this is a massive potential timesaver for me.

This is the syntax for the command if you are using the script from the terminal. -f is ‘from’, -t is ‘to’.

With this knowledge you can now customize the macro to your needs. In your case it’s simple: just replace the “fr” (after the ”-t”) in the last line of the Execute Shell Script action with “cy”:

If it doesn’t work, try this:

Everytime the text to translate has a ’ character in it, it comes back as ’

Not sure what you mean.

I didn’t try the macro but when I use the script in the Terminal and want to translate a phrase I have to wrap it in straight double quotes.

Been a while on this one.

The original translate.py program specified in the link in this posting is no longer available so I found an alternative version. I am not clear on whether that is creating problems.

The current macro "Google Translate via Python Script.kmmacros.zip" does not seem to bring up any window. As well, if I simply try to execute the "Execute Shell Script" within the macro by itself (Cog>Try Action). No window is opened either.

Of course, if there is a simpler way to do this, I am open to suggestions. 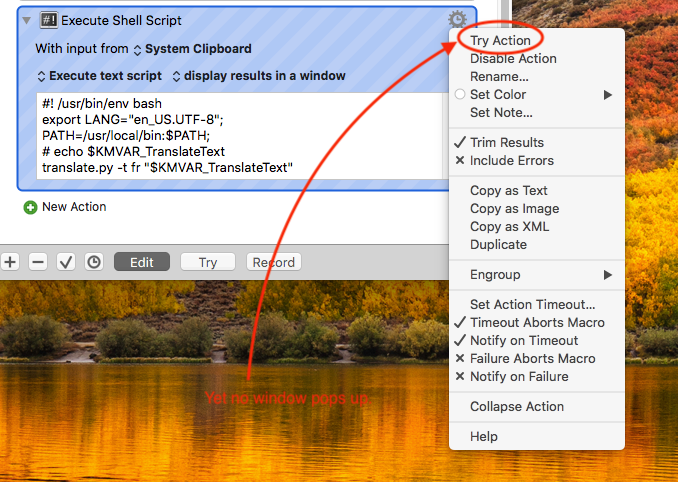 To the clipboard, AND
To a popup window.
The original translate.py program specified in the link in this posting is no longer available so I found an alternative version. I am not clear on whether that is creating problems.

Some time ago I’ve written a macro for that:

It already writes the translation to a KM window, and you can easily add the actions to make it write to the clipboard also.

Hey Tom - thanks for the reply. I will give your suggestions a try and report back.

A friend just pointed out your Translate Shell GUI for KM and I’ve got everything set up, but get the following when I try to translate anything:

I can confirm that Translate Shell is in my path:

and that it actually works when I run it from the command line.

I’m a bit stumped as I’ve not used any sort of scripting for a couple of years now, so am having a difficult time parsing what I need to change to fix this.

Any help would be greatly appreciated.

I The important thing is that also KM needs to know about the path of your shell executables. My macro contains a link to the Wiki article that explains it.

I‘m on my iPhone ATM, I can explain it in details later, if still necessary.

I think that must be it. I’ve gotten around this to some extent by adding the following to the beginning of each of the “Execute Shell Script” options:

And by the way: I can’t seem to get Bing to work as an option.

Just to prove it wasn’t a problem with syntax/Translate Shell I did the following:

Has anyone else found this problem as well?

You have two possibilities:

You can call the path explicitly with every script acion. As you have done; and it works perfectly fine.

Set the the KM variable correctly in KM, i.e.:

If you don’t have a ~bin directory, don’t set it.
For the language-specific stuff; you can also use, for instance,

depending on your language. The important stuff is the UTF-8 at the end. (For instance fr_FR.UTF-8)

But this (the language settings) sould be OK on your system, unless you have meddled around before.

The difference is, if you set the KM Environment variables appropriatetly, you don’t have to set the path each time explicitly with each script action. That’s all, but that’s why I recommned to do it.

Thanks, Tom. It’s been a few years since I’ve needed to monkey about with this sort of stuff, so I appreciate your patient and very detailed help.

Have a good weekend.

Each thing you tell to your shell in one of those:

… you have to tell also to KM if you want so. (KM doesn’t read any of the above mentioned files.)

But have other found that Bing doesn’t seem to be working with this?

The other engines (google, deepl, yandex) seem to be fine.

Yes, there seems to be an issue with the Bing API currently:

I’m sure he’ll sort it out.

I'm getting this error when I run the macro: gawk: fatal: cannot open source file `ef' for reading: No such file or directory
Would someone please help me?
TIA!

Thank for this thread. I am studying Korean and this macro has inspired my workflow. I trigger the macro to do the following: 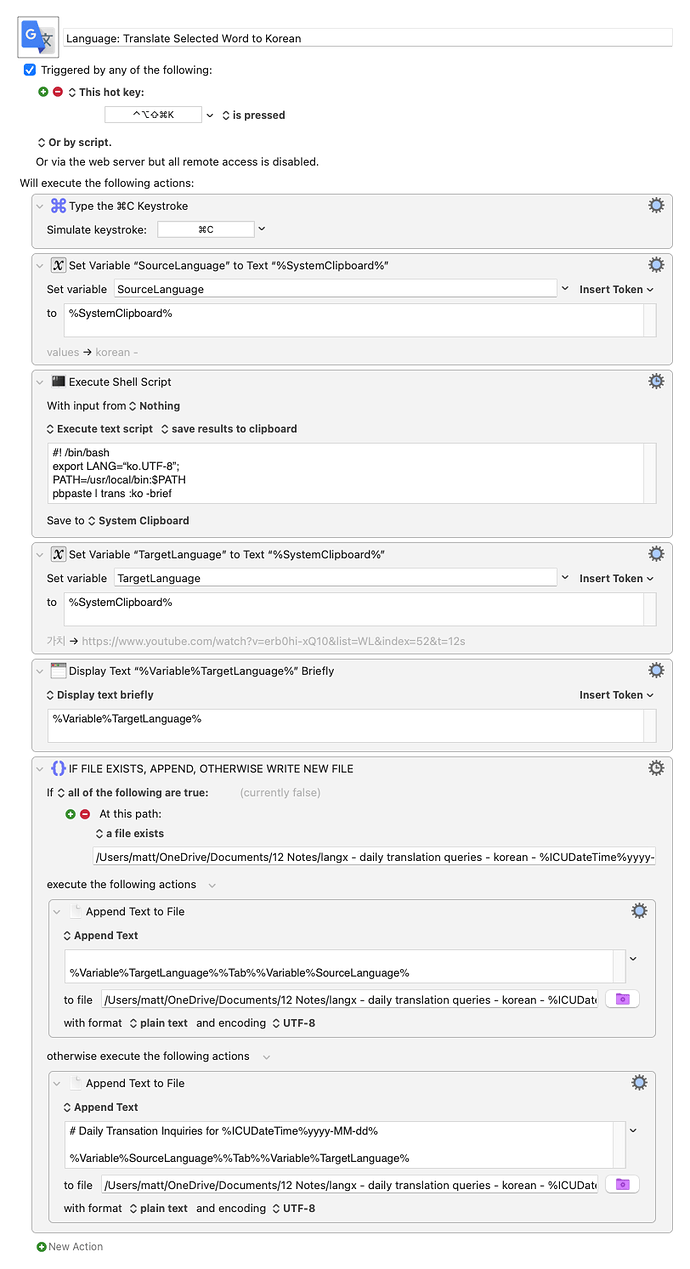 The idea of appending the translations is to have an informal record of my learning and to be able to review it at the end of each day. I can then choose to record them for further study, such as adding a word/phrase to Anki flash card deck. You could take this a step further, and append text to a CSV file to be directly imported into Anki. This video shows some good examples and may give you a couple of ideas.