I've just reinstalled Catalina on my Mac, and some of my settings are gone.
I swear that I'd managed to use modifier keys (⌘, ⌥, etc ...) with the Fn+Function keys as triggers in KM previously (for example, I'm trying to reinstall @DanThomas's KMFAM gem, using ⌘F12 as a trigger.

But on my "new" install, I can't get the modifier keys to function with the Function keys. And Karabiner Events Viewer confirms that the function keys (F1...) register alone as key presses, even If a modifier is pressed.

I thought there was a workaround or a setting to make these modifiers work, but apparently I either dreamt it or can't find it again ... Does anybody use Modifers and Fn keys on a Touch Bar Mac?

But on my "new" install, I can't get the modifier keys to function with the Function keys.

You probably need to check this setting in System Preferences: 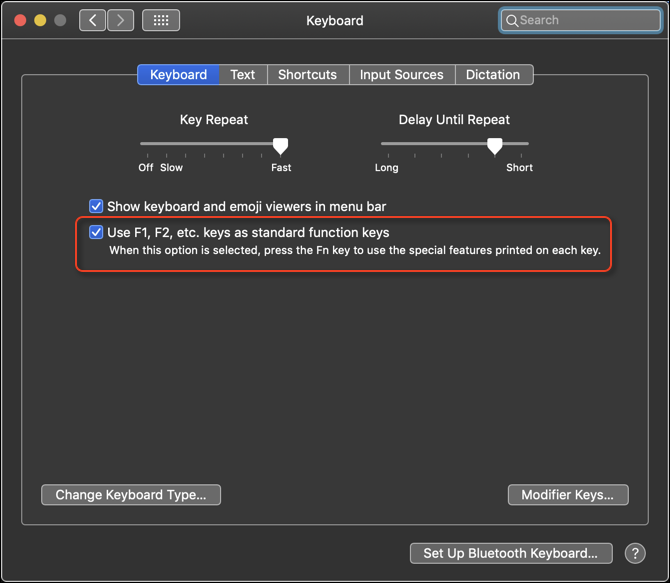 Thanks, I did. Still doesn’t allow for the modifier keys to work though. Simply switches the Touch Bar display from « actions first » to « F1 ... F12 » first ...

In Karabiner Elements settings under the "Function keys" tab, try toggling the checkmark for "Use all F1, F2, etc. keys as standard function keys" 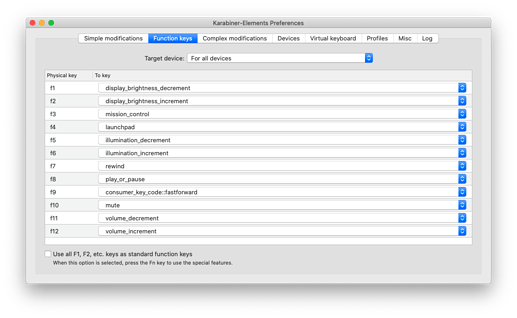 I am able to use touch bar Function Keys with modifiers as KM triggers, when I have that box unchecked.

Thanks, unfortunately it's already toggled. None of the positions do anything on the Touch Bar function keys.

AH! in itself this didn't work, but it gave me a clue to look further into karabiner elements. The solution is here. All you need to do is to activate the "No product name" keyboard in the "devices tab" of Karabiner.