This Macro utilizes Mac OS Mojave's "Type To Siri" feature in which you can activate a Siri prompt and type in text to ask Siri for information or for controlling HomeKit devices.

The Macro runs some UI Scripts via AppleScript - which can sometimes be unreliable. I've tried to make them as reliable as possible while also adding some simple error notifications if something doesn't work. Problems may occur if you're running this on a Mac that's receiving lots of Notifications at the same time that the macro is run. As long as the "Type To Siri" notification window is the 'last' notification window shown, then it should work fine. I could fix this so that window order doesn't matter, but it wasn't necessary for my purposes as I have this running on a headless Mac Mini that's not receiving other notifications.

These are just some of the many things I execute with this macro.

Wow. Just wow. Did I say wow yet? That's 20 times more impressive than my primitive method for addressing HomeKit control. Your post is informative and innovative. Brilliant. AppleScript always makes me struggle so I'm really impressed. Very inspiring. I will study this. That's a whole different approach that I should have come up with myself... but didn't. Throw my old ideas away. I wonder what else can be done with this approach. I haven't even loaded your macro yet and I can see it's a winner. But it would sure be nice if the next release of KM could support this a little more directly with an action. After I study your solution I may propose a new action. But I hear it's on Peter's future feature list, so there's no point in pontificating.

This Macro utilizes Mac OS Mojave's "Type To Siri" feature in which you can activate a Siri prompt and type in text to ask Siri for information or for controlling HomeKit devices.

Thanks for sharing. This looks like a very cool & useful macro.

I'm looking forward to upgrading to Mojave so I can take advantage of features like this.

You might like to use the parameter facility in the Execute a Macro action to pass your parameter instead of passing in a variable. You can always just start your macro with:

to leave your macro unchanged.

Is there any other benefit besides the fact that I'll be able to remove the "Set Variable" action?

It just means that when executing the macro you don't need to remember the name of the input variable.

All - I must be missing something or this setup process is missing a step. When creating the macro as shown above the "Type To Siri" selection does not appear in the dropdown menu of "All Macros" to choose from when selecting the "Execute Macro" step.

In the attached screenshot you can see that there is no "Type To Siri" macro. Did I somehow miss a step to create a macro called "Type To Siri" first? If that macro does not exist the subsequent steps cannot be followed.

I get the rest of it and it all looks logical to me but I can't build this unless I can get past this step. Can someone assist? 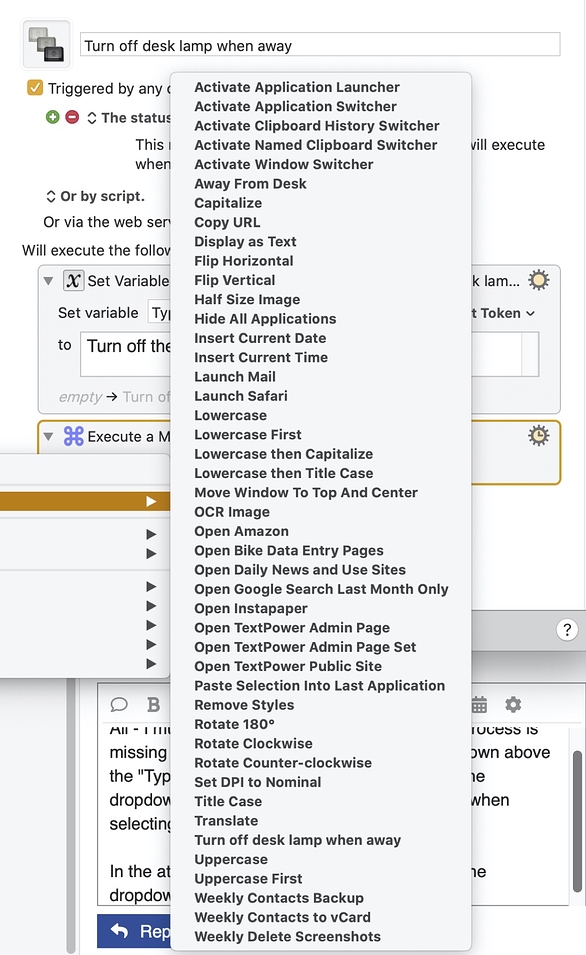 Seems like you missed downloading the Type to Siri macro at the end of the initial post?

Thank you. I did miss that. My apologies for not seeing that at the end of the post. I’m very familiar with the use of AppleScript and was a former Quickeys user (remember that app?). Using forums for help is unusual for me and I simply overlooked the downloadable macro.

I appreciate the help from the community and the quick response. Now it’s back to HomeKit and KM. I’m going to attempt to connect my iMac to my desk lamp (plugged into a Wemo smart switch and connected to my HomeKit through a HomePod as a hub) so that when the screensaver comes on (or the computer locks) it issues a command to Siri for it to “turn off the desk lamp.”

Thanks to @rolian and any others that may have read my post.

Thank you for the Type To Siri macro!
I had to change the string for the process name to work with my German MacOS installation. I am sure this is needed for other non-US installations too.

After replacing the following in all Script blocks it worked fine for me:

The strings for the description of the notifyWindow and for the textField don't need to be localised.

Does anyone have this macro working with Big Sur? It appears the AppleScript for interacting with Siri has changed and I'm not sure how to figure out what the equivalent elements should be. Any help is appreciated!

Did you make any progress trying to get this to work? All dead ends for me.

Unfortunately, no. I tried messing with UI Browser but quickly got in over my head.

I believe typing to Siri can be accomplished, but capturing the response is where I'm not finding a starting point let alone a path forward.

Sorry guys! I would love to help, but I'm not sure when I'll be installing Big Sur.

Here is my simple and very not robust temporary fix...

I am using KM to simulate what I would type if I were using Type to Siri. 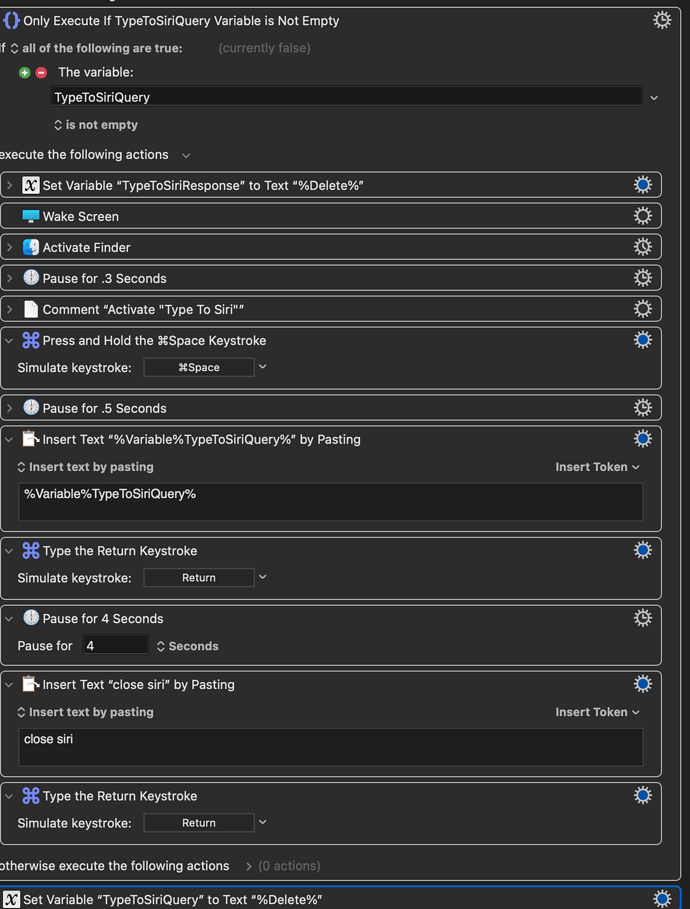 Here's an updated version of the AppleScript that will run on Big Sur:

Edit: I should mention, I'm not very good with AppleScript, so this is probably going to break in the future, but it works for now.