Since the login often takes a bit too long, I have created in the accessibility a shortcut ... 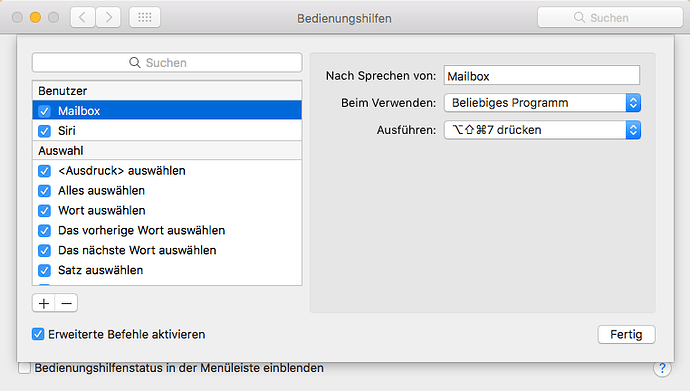 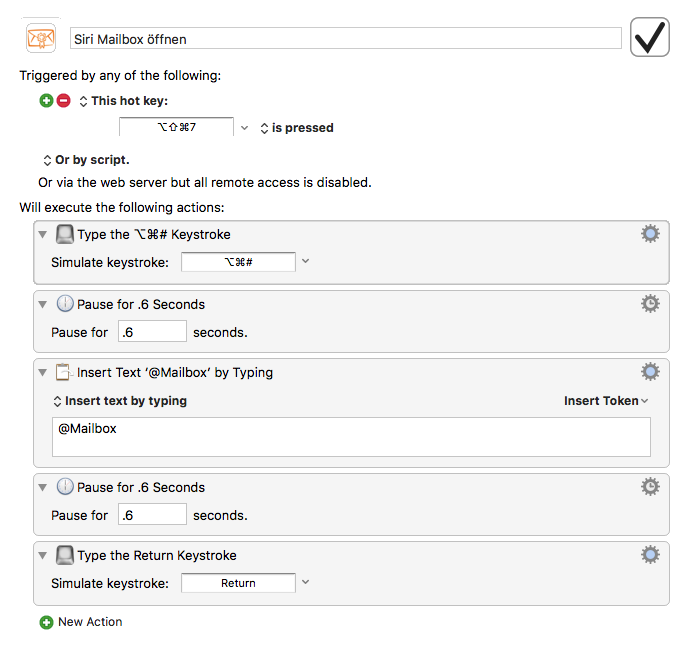 I can now log into each website with a single language command. Here is a short video.

Please excuse my English ... Google Translate is my best friend

When looking for English Mac UI terms a good source is the OS X Human Interface Guidelines.[1] It has a table of contents, so it’s not too hard to find even completely unknown terms.

If you are scripting/programming/developing on a regular basis, don’t use a localized macOS. This will pay out in several ways:

[1]: This used to be available also in the German iBook Store under this link. But currently it isn’t; perhaps they are still updating it for Sierra.

Hello @Tom many thanks for your feedback and the improvement. I’m very glad you could help me. I’ve improved it.
Foreign languages ​​and I … no we will no longer be friends in this life

I use KM only a few months ago and I regret that there are hardly any tutorials for beginners in German. In the beginning I was simply overwhelmed. Now I have made it my task to improve this here. Therefore on YT in German language. I try to make the work steps for a macro as simple as possible and understandable.
I would like to introduce KM with small steps, so that the users of the quality and the benefit can convince themselves

For this reason, I always make a video to my contributions in the forum, because sometimes say pictures / videos more than written words.

The one with the English Apple UI I secured the same time. Please also be critical in my contributions in the future. I am happy to learn every day.

Please also be critical in my contributions in the future

My intention was not to be critical in any way, I added the term “Accessibility system preferences” because nobody interested in the that topic would search for “operating aid”. (I see, you have changed it now.)

My tip with using a non-localized OS was meant to make your life (as scripter) easier.

My tip with looking up terms in the OS X Human Interface Guidelines was meant for making your posts more accessible for everyone. Google Translate is situationally useful for some things, but when it comes to fixed terms like “Accessibility system preferences” you can not count on it, even less when you are trying to re-translate a German localization. These terms are like proper nouns: they are what they are, trying to translate them literally will fail in most cases. And thus Google Translate can not (yet) handle it. (For example, Microsoft may use a different term for the same thing, and both terms are “correct”.)

Therefore on YT in German language.

I think it’s perfectly fine to post German videos about KM. This allows KM to reach more users.[quote=“appleianer, post:3, topic:6018”]
I use KM only a few months ago and I regret that there are hardly any tutorials for beginners in German.
[/quote]

As far as I know, KM isn’t localized at all, it exists only in English. (Correct me if I’m wrong.) Due to that, non-English-at-all speakers are virtually excluded from using KM. It’s up to @peternlewis to localize his product. Once localized, it will attract a certain number of new users. But this would mean lots of (expensive) work and – honestly – I don’t know if there are so many users that are deterred by the English-onlyness of KM.

However, as already mentioned, I do think that a German forum category wouldn’t be a bad idea. It would do the same thing as your videos: giving non-English-natives an easy entry point to KM.

I hope this isn’t serious

“Foreign” languages are enriching your conscience in an incredible way; they are opening up different concepts of thinking. Besides that they help you understand your own language (!) and, obviously, enable you to communicate with the “rest” of the world.