What Do the Macro "History" Buttons in the Editor Do?

In the Macro Editor window, top center, there is a pair of buttons labeled "History". I cannot find any documentation on what it does except the single line:

So my guess is that it simply selects which macro you might want to edit, according to the most recently changed. But that's just a guess. Am I right? It doesn't maintain any history of changes, only the equivalent of a "Recently Edited Files" list, right?

Just now I found another use for it. I was looking at the list of 11 macros in a group that I had been working on, each macro for one step in a long process that hopefully will eventually become robust enough to just run the whole thing (but which meanwhile is taking some manual intervention).

I made a small change to one macro and went back to the list, and another macro was simply gone. What? I looked around the UI, trying to see if it might be a display issue, and when I looked at that group again, two more macros that I have been laboriously building were gone too. What the heck!?

I think, I'm not sure, that maybe a charging cord was accidentally draped across the corner of my keyboard and was depressing the Forward-Delete key there. Wow. But how to recover my macros? The Wiki and the Forum were no help when searching for Archive, History, Backup, or UnDo. Searching on "history" got me lots of entries about the clipboard history, but nothing else.

However, clicking the Left button in the History pair showed me a list that included the names of the missing macros, and when I clicked on each of them, they were restored to the Macro Group. At first I thought that this History might include an UnDo, but it appears that the macros were restored in their last edited state.

I'm still a little out of breath from the adrenaline rush at the idea that I'd lost so much work.

Can anyone explain: What do the History buttons actually do? Where were my deleted macros when I couldn't see them: Was it a display glitch or did History actually restore them? Are there any Backup or UnDo features to help protect against catastrophic user error? Are there recommended ways of backing up my work when I start experimenting with radical changes?

Where are the macros saved so that I might restore them using Time Machine, if it comes to that? I don't want to do a full system restore just to recover a single accidentally deleted macro; it might change too many other things along the way and take hours to do.

In the Macro Editor windot, top center, there is a pair of buttons labeled "History". I cannot find any documentation on what it does except the single line:

Hovering the cursor over one shows a tooltip of "Select the previously edited macro." So it's like a Back button for moving through edited macros (and there's a forward button). Click and hold on that "Back button and a list of recently edited macros will be shown, all presumably in reverse chronological order.

I made a small change to one macro and went back to the list, and another macro was simply gone. What? I looked around the UI, trying to see if it might be a display issue, and when I looked at that group again, two more macros that I have been laboriously building were gone too. What the heck!?

It's difficult to understand what took place here, but I suspect there's more to this. I've never heard of macros disappearing. Select a macro, press Delete (or Forward Delete), and... nothing will happen. Point being, there's no one-finger keyboard shortcuts for deleting macros. There's Command-Delete to remove a macro, and there's Edit > Delete, and that's why I suspect there's more that took place than you described.

Are there any Backup or UnDo features to help protect against catastrophic user error?

Backup: Besides any general system backups you may perform, see File > Revert Macros in the Keyboard Maestro Editor.

Undo: It's in the Edit menu and also uses the standard Command-Z shortcut. Delete a macro with Command-Delete and pressing Command-Z will bring it back.

I cannot find any documentation on what it does except the single line:

I also experienced a very serious bug where many of my macros had disappeared....for a moment....it worried me but I found the steps to get all the macros back. Perhaps it was related to your case ?

1- Select the all macro group
2- Type cmd-F
3- Type a letter. almost any letter will work.
4- Tada! some of your macros just disappeared....you can search them in all your groups...they're simply gone...

(To get them back just clear the search field

yes, obviously...and that is kind of my point actually; I experienced it like a bug and It felt like it because I forgot/overlooked/did not see that there was something lingering in the search field. I'm just curious: has anyone else got caught by this?

I'm just curious: has anyone else got caught by this?

I think it scared me briefly long ago – as in OMG! my heart skipped a beat – and then DOH! <palm smack> – I just filtered those things myself...

I'm just curious: has anyone else got caught by this?

Yes I too had this and it freaked me out a bit for a few minutes before I realized what had happened.

Thanks for the documentation Chris I couldn't find it either though it didn't really help me at all since it is not making any sense to me what is showing up in the history since things that haven't been modified in there show up. I started another thread related to this for the Modified as well. The macros that show up there don't make any logical sense to me they don't even have Variables that are updated.

Here is one macro that shows up that I haven't modified probably in two years and I have modified hundreds of macros since this one has been touched. 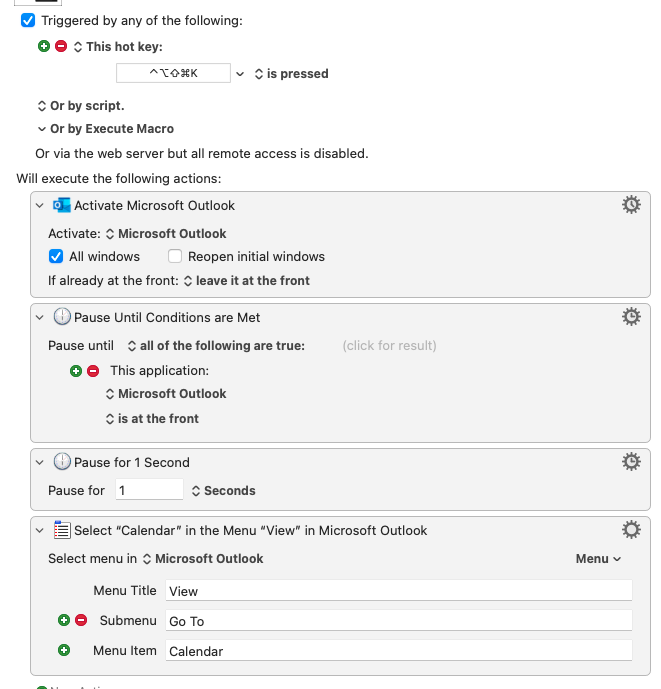