Colour of Pixel Under Mouse Pointer

Function: Returns the RGBA colour of the pixel under the mouse cursor, copying the values to the clipboard and momentarily displaying them on screen.

Colour of Pixel Under Mouse.kmmacros (4.7 KB) 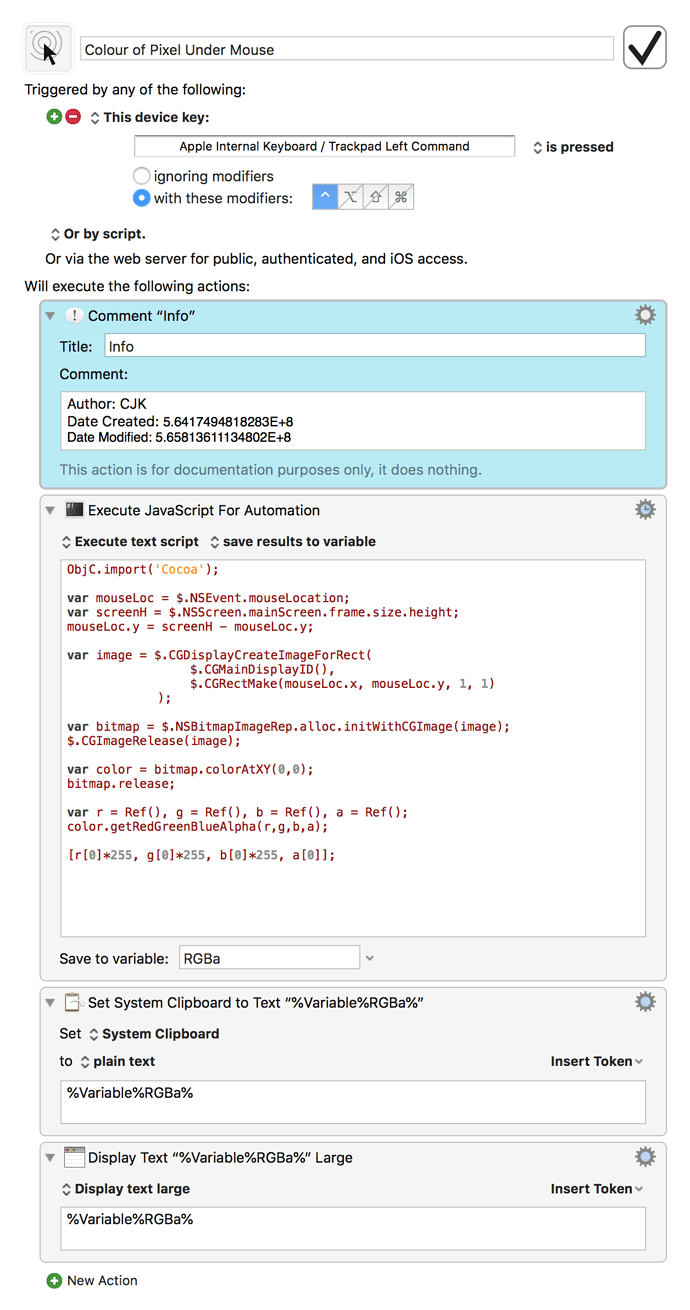 This macro looks really interesting even though it doesn't seem to work for me. Moreover, I would like it to return the Hex color code instead of the RGBA. Any help?

I would need more information. Saying it doesn't work doesn't provide a starting point from which I can attempt to fix whatever it is that' stopping it from performing as one would expect on your system.

Can you provide me with some debugging information ? My first recommendation would be to try using a simple Hotkey trigger to make sure the macro is being triggered, just in case the device key trigger isn't recognised on your system from it having a different keyboard device to the one I used at the time of registering it to trigger this macro.

Once you can be confident the macro is being triggered, and that the problem is occurring somewhere in the course of its execution, can you then tell me what value gets copied to the clipboard or displayed in large text, if any ? If this doesn't happen, can you trigger the JavaScript action by itself and check what value gets stored in the variable RGBa (or whatever you might have named it to) ? I'd recommend pressing the cog to bring up the menu options for that action, and making sure the following three options are checked: Include Errors, Failure Aborts Macro, and Notify on Failure. This should mean that, even if the script throws an error, the details of that error will get stored in the RGBa variable, which I will need in order to understand what's going wrong for you.

I am assuming you're running Mojave, and so I will probably need you to be willing to test three of the JavaScript commands that I suspect are the most likely candidates for any scripting errors to arise from. But I'll explain which ones and how to do that once it's clear what the actual problem is.

Once fixed, getting it to return hex values won't be a problem at all.

This is the result I receive:

Thank you, that's really helpful. I've actually come across this error before from another script that someone had the same issue with, but I think couldn't be bothered to go through the steps at his end to help debug it, so I was never able to provide him with a fix.

It is a Mojave JXA bug, where it appears to be incorrectly converting the data types from the sort that JavaScript uses to the sort that C or Objective-C uses. In this case, it appears to be one of the arguments passed to one of the functions that's the problem, and it occurs when that function is invoking another function behind the scenes called NSGetSizeAndAlignment(), at which point the JavaScript engine is crashing.

I'm don't know for certain which function is the guilty culprit. However, since NSGetSizeAndAlignment() is an Objective-C Foundation method (starting with "NS..."), my first guess is that it might be the NSScreen class that's calling it in order to obtain the dimensions of your display.

Anyway, that's all probably sounds very dry to you. If you're happy to, let's find out if NSScreen is being naughty... Can you delete the entire text in the JavaScript action, and replace it with this:

Run that action with just those two lines, and let me know what gets stored in the RGBa variable. It's best to go into Preferences... and delete the current contents of the RGBa variable first, because I'm hoping that the variable will end up being given the same error message you're getting now, and if there's anything that simply stops the script from running before the action writes out to the variable, it'll contain the same data as before and be misleading false positive test.

If the variable contains the height of your screen, then could you re-run the test with this script instead:

If both of those work successfully, then my next step would be to do this test with every single line individually until I get one that throws the error (you can see why the previous user a while back probably just scoffed at this idea and thought "ah, fuck it, I'll find another way", so I don't blame them. But if I had Mojave, I can actually run the script myself in a step-wise fashion using my own debugging routine that would take about a minute to locate the problem, but it's these scripting bugs that Apple are too ambivalent to bother fixing that made me not want to upgrade to Mojave in the first place). Don't do this yourself, but let me know if you're willing and I'll tell you the order in which to test each function as some can't be tested by themselves on a single line and need to be tested in conjunction with another function that first needs vetting before testing it with another, etc. etc.

I put a Set Variable “RGBa” to Text %Delete% at the beginning of the macro and replace the text in the JavaScript action with:

And the RGBa variable returns:

Sorry for the delay. I've been away.

I'm mindful I've not attended to this in a few days, and I can appreciate that line-by-line debugging is not something you wish to wait even more days for feedback.

I've given some thought to the more likely contenders of possible/probable misbehaving lines of code, and adjusted the script accordingly. This isn't how debugging is typically advised being done, because if the script still produces an exception, that leads us back to this spot. But, I also feel that, if CGRectMake() was responsible for that second error message, then it could be that Mojave has fundamentally broken core elements of the JavaScript-Objective-C bridge that might make debugging fruitless (I am, of course, hypothesising).

Key changes I made:

Function: Returns the RGBA colour of the pixel under the mouse cursor, copying the values to the clipboard and momentarily displaying them on screen. 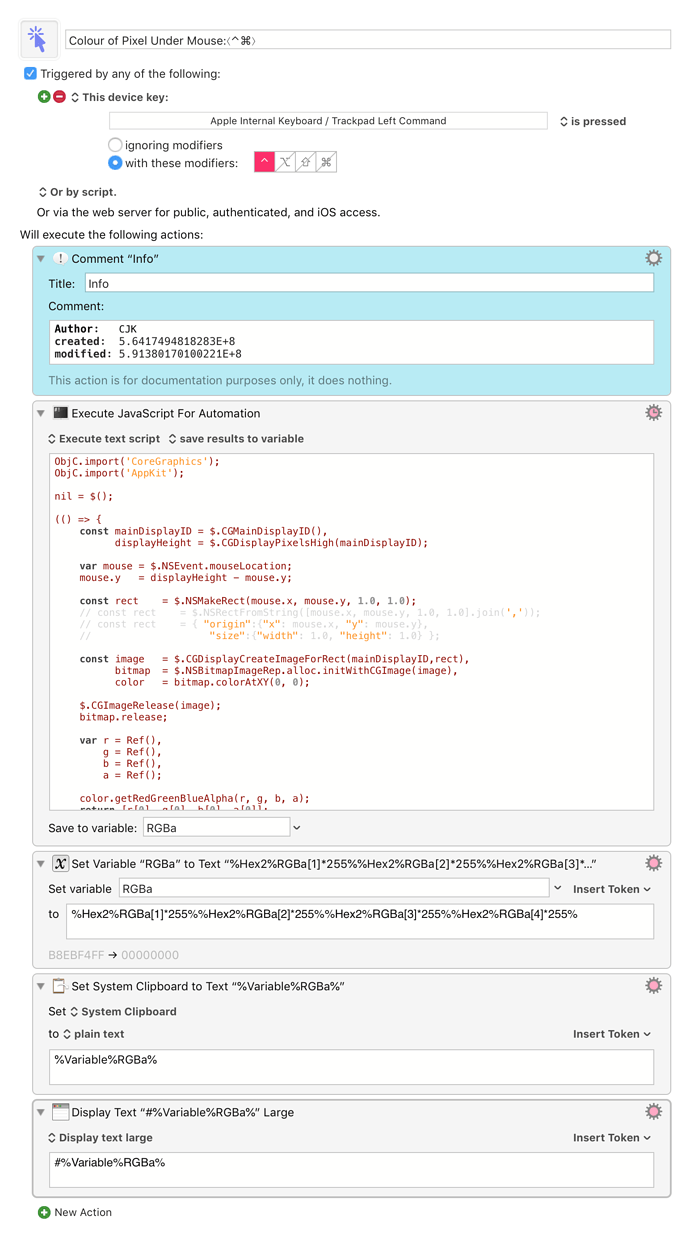 I'm sure most people won't care about this alternative method, but it's shorter and uses only KM actions: 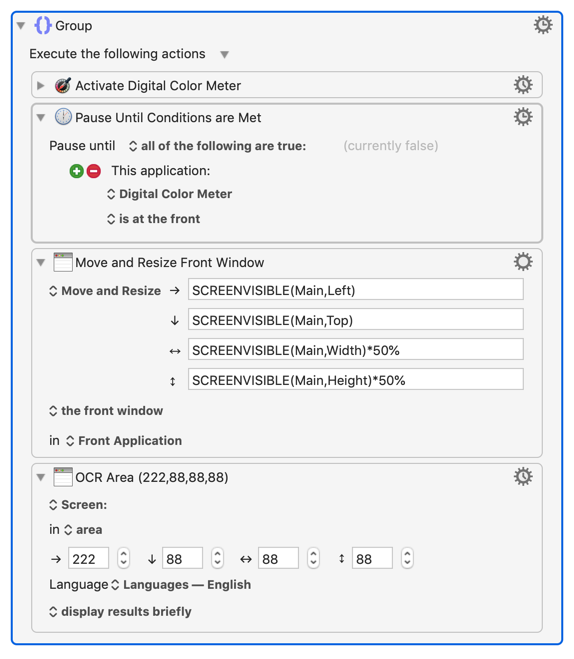 Ours both have 4 actions (excluding my info box, which is a non-functional element).

I'm sure most people won't care about this alternative method

I think alternative methods are always welcome. For me, I had no idea that application existed, and think I just examined the colour of every pixel on my desktop. It also fits in with being your knack for keeping things simple, which is a good thing.

As a small, but potentially significant, critique, it is currently specific to one's system display size, and it's worth noting (before anyone replies with "it doesn't work") that the OCR area will likely need adjusted by the user to target the appropriate area on their screen.

However, if you wanted to eliminate this variable, then you can do this: 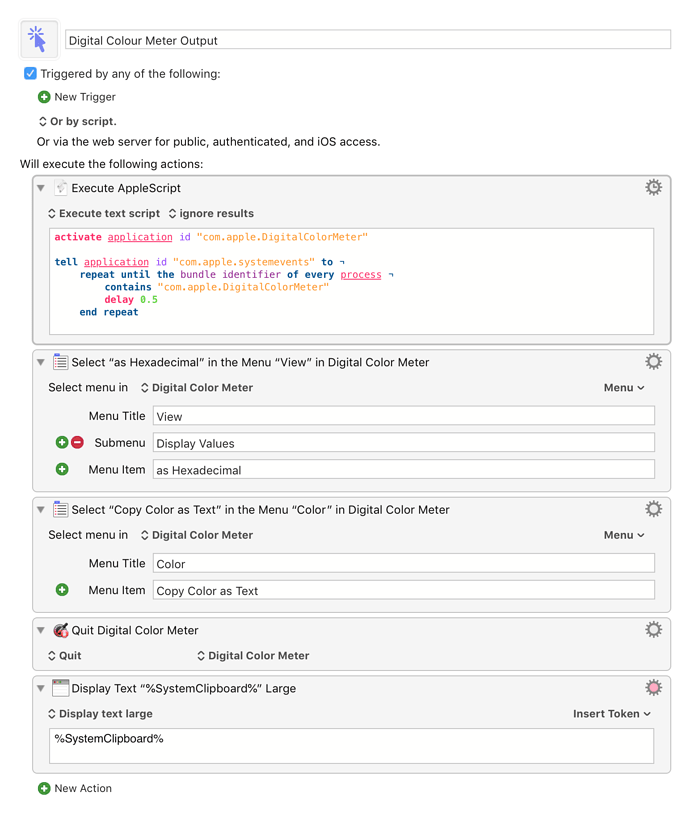 It's surprisingly swift, and probably most people won't mind a brief flash of the Digital Colour Meter application appearing and disappearing, although it's what would prevent me personally going this route.

However, you've also given me another idea I might toy around with.

Ours both have 4 actions (excluding my info box, which is a non-functional element).

Actually, my screenshot shows 5 actions (the group action) so you actually win.

it is currently specific to one's system display size

I didn't test it on other screen sizes. I could have used some math to make it work on multiples sizes. And OCR is quite robust when it comes to font sizes.

Glad you’re importing Core Graphics rather than Cocoa as I thought the latter went away in Catalina (but I might’ve been listening with my elbows).

Cocoa is name given to the trio of frameworks: Foundation, AppKit, and Core Data. I would be very surprised if it was suddenly scrapped, as there is no other API I am aware of teed up to supersede it, and a lot of the Core Foundation functions have been deprecated for a while in favour of Cocoa implementations.

That said, I don't know anything about Catalina and have remained on High Sierra so far.

Thanks to everyone. Still no luck with the JavaScript. Here is the error:

On the other hand, the Digital Color Meter approach is interesting and… working

So I can already use this method.

On the other hand, the Digital Color Meter approach is interesting and… working

Thanks for using it! It's not really a great solution because it has some issues with speed, flexibility and robustness. It's almost more of an example solution. But if it works, it works.

Still no luck with the JavaScript. Here is the error:

Thanks for feeding back. Can I just get confirmation that this occurred with each of the three different forms of rect ?

If so, either the bounding rectangle needed can't be created; or the crash occurs before this; or, of course, both. Either way, it's an issue with the JavaScript/osascript engine in Mojave, and I don't see the likelihood of a positive outcome being too low to make it worth asking you to debug this script to death (and one shouldn't have to, as it's a perfectly fine script, and Apple ought to be doing the work rather than us).

I'm glad there's an alternative you're using. Thanks for taking time to help problem-solve with me.

FYI, I commented/uncommented the three different forms of rect.

The first one ($.NSMakeRect) returned the following error:

And the other two didn't return anything. No error but no value either.

Is there some reason the PIXEL function is not sufficient for this task?

I don't know what you would want with the alpha since there is no alpha on a pixel on the screen.

Thanks Peter, I didn't know the PIXEL function but this is just perfect! And so damn simple!