Prompts for a shell command like wc or ls etc,
creates a PDF and opens it in Preview.

(Defaults to creating the PDF on the Desktop, but can be edited to use a different output path)

What a great macro! The first time I ran it, it popped up a window with a whole bunch of font names in it - I suspect it was just pstopdf building some sort of font cache. It never displayed anything after that.

Thanks !
I hadn’t seen that font cache event - I wonder if there’s a simple way of trapping it …

UPDATE:
I’ve added an -l switch to pstopdf to the macro in the post above – I think that should redirect any messages about font initialisation to a log file …

FWIW a version which lists 1000+ commands and lets you select which ones you want to see PDF man pages for:

And an updated version of the second macro above (browse and select from 1000+ commands to read PDF man pages) which:

Speaking of which, technically $HOME can have a space in it too, so it should always be quoted - this lead to a significant data loss bug in an iTunes update for folks with this issue.

2 Likes
What would be the command to open ALL PDF files in a specific folder in a specific app (Preview for example)
ComplexPoint November 25, 2020, 1:01pm #8

UPDATE - the version I am using now, which aims to include those quote adjustments:

Hello, I have downloaded your last version of "Browse Bash command man page(s).kmmacros", but after setting a folder as asked, the macro does not create nor show a pdf of a man command. To understand what happens, I have changed the last Execute Shell script of the macro from "ignore result" to "display results in a window".

Here is the error output:

The folder "/Users/(myName)/Documents/Man page PDFs (via Keyboard Maestro)" is empty.

Can you help, please? (by the way, the second macro " Shell manual page for command (as PDF) copy.kmmacros" doesn't work neither, nothing is displayed).

The second version is working here under Catalina.

Which macOS version are you using there?

The trick would probably be to get something working on the command line in Terminal.app, and then gradually re-wrap a macro around it.

For example, can you at least get something in Terminal.app by requesting the pstopdf command line options – entering this incantation:

and a view of the man page with:

If those both fire OK, then try writing a man page PDF to the Desktop with something like:

and if that seems to work OK then

If all of those things have functioned OK, then perhaps the issue is with the destination folder ?

One thing that might be worth experimenting with in the last Shell script action of the macro:

is to eliminate the -i flag from the main line, editing it to:

Here's my current version (working on Catalina), with the -i flag suppressed:

is OK. Then with:

I obtain 2 files, the expected tr.pdf and a tr.pdf.log (it contain a list of fonts). The next command:

is also OK. The pdf is opened in Preview.app.

Your new version of "Shell manual page for command (as PDF).kmmacros" don't work neither.

So, I go to the Keyboard Maestro preferences to delete the "man page PDF folder", and retry with your new version, and set the destination folder to ~/Documents/man-page-PDF, and it works.

Doesn't your macro support path with spaces in it?

But, the second macro "Browse Bash command man page(s).kmmacros" don't work (nothing displayed). To try understand why it don't work, I modified the last "Execute shell script" to change form "ignore results" to "display results in a window". But no window is displayed. In last resort, I add an "Alert" action before the last "Execute shell script" and the alert is displayed as expected. So what can I do with the Javascript code to test what is wrong?

So what can I do with the Javascript code to test what is wrong?

I don't think the macro contains any JavaScript – the shell script issues are a bit hard to test when we are using different OS versions (and possibly different shells ?)

Did I understand from your narrative above:

So, I go to the Keyboard Maestro preferences to delete the "man page PDF folder", and retry with your new version, and set the destination folder to ~/Documents/man-page-PDF , and it works.

That you have managed to find a working permutation of the options ?

In "Browse Bash command man page(s).kmmacros", aren't in the code:

I have never used the Script Editor.app with the Javascript language. What must I paste to the Script Editor.app (with JavaScript instead AppleScript setting in the window) to test the code? I tried with all the code in the "Execute shell script" action, except the first and the last line (so no osascript -l JavaScript <<JXA_END 2>/dev/null nor JXA_END) and the script compile, and display a window with a big list of 245 commands.
So why doesn't run it in the macro?

(text edited: previously, when pasted in the Script Editor.app, I forgot a ( at the beginning).

Got it. There is indeed a JS fragment in there, but it's still part of a Shell script.

(a literal string argument to the shell osascript command)

I could take a look later in the week at allowing for paths with space. Many thanks for pointing it out.

(Incidentally, if you ever do want to experiment with some JS code in Script Editor, the trick is to choose JavaScript from the language selector at top left) 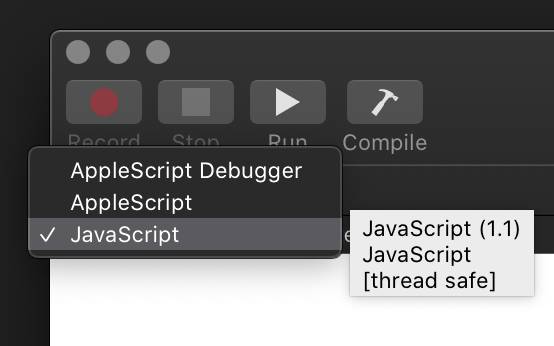 (Incidentally, if you ever do want to experiment with some JS code in Script Editor, the trick is to choose JavaScript from the language selector at top left)

with JavaScript instead AppleScript setting in the window

Yes, it's exactly what I have do (but as my language is not English in my country, I badly explain it).

As the (JavaScript) code run (*) in Script Editor.app, the problem is in the first line:

or in the last line:

Yes – as I was trying, probably not very clearly, to explain - that isn't JavaScript – that's a shell command.