If you post your macros (here or elsewhere) for others to use, one of the challenges is letting your users know when there's an updated version available. I update my web search via abbreviations macro on a regular basis, and it seemed silly to have to update the forum post here, tweet about it, and update my blog post every time I did so—and still hope that current users saw one of those sources.

I decided to write a simple update checker that will let users know when there's an updated version of the macro available. Here's how it looks in action: 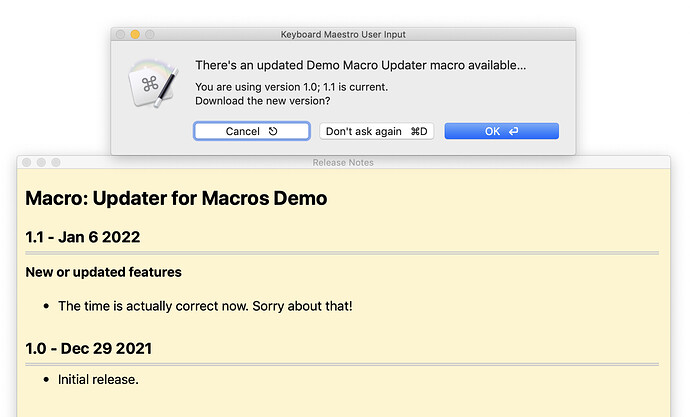 It is not a software updater—that is, it won't handle the process of installing the updated version, copying customized bits over, etc. But it will alert users that there's a new version available, and let them download it from within the macro.

The following is going to be long and only possibly of interest to those who distribute their macros. And there's a gating prerequisite to make this work:

You must have access to a web server where you can host a very simple web page (that has one line of PHP code) and a few simple files. If you have shell access, it's even better, but not required.

Assuming you have that, here's a demo project for the updater:

(Of course, if you have the project already, you can get the update within the macro itself.)

IMPORTANT NOTE! If you're going to use my updater, you should keep this demo macro in your collection. If I make changes in the future, they'll be reflected in updated versions of this demo, and you'd be notified of those changes.

━ WRAP UP ━━━━━━━━━━
This is a very simple updater, but it addresses my main need: Users of my macro will now know when there's a new version available, without having to take any action on their part. From a security perspective, nothing is sent from the user's computer to my server (beyond whatever cookies, etc. might be sent when accessing any web page).

If you do decide to use it, I'd love to hear how it works for you, and how it could be improved.

Version 1.2 is out now, and will be soon linked above, and it solves my main worry: There's now a download verification step that should catch any macros that were replaced by other files on your server. Note that you can install 1.2 now, but to really test the verification step, you'll need 1.3, which I'll release with some meaningless change over the weekend.

This verification step ideally requires two servers, as it stores shasum values on the second server. It downloads those values (values for the .zip and .kmmacros versions) and compares them to one it calculates for the just-downloaded file. If they differ, a dialog appears that hopefully makes it clear to the user what's happened… 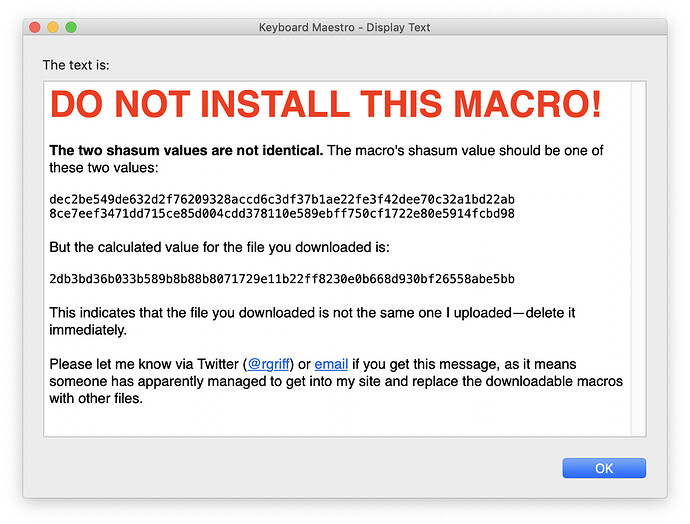 This isn't a 100% foolproof system, but it does make it very unlikely that someone would be able to replace your downloadable macros with something that an unsuspecting user would install—the bad actors would have to gain access to two separate servers in order to do so.

I'm using Github to host my shasum values, but any server you have access to that can serve a web page you can curl would work. There are more instructions in the verification macro.

Version 1.3 is out, and I changed the way I'm storing the SHA-1 hashes. As a result of this change, if you update from within the demo, the verification step will fail. That's because 1.2 has the old method, which fails with the new storage method. So download the macro from here instead, or just ignore the failed verification.

It's a bit of a pain now, but it was the right thing to do for future versions.