An icon as text is perhaps an oxymoron yet proves useful, as purely graphical icons just don’t represent some macro outputs no matter how artful.

I trigger macros less by keyboard combinations (another oxymoron for Keyboard Maestro) and use the more graphic palettes which require less memorizing, less muscle training/retraining, and are more approachable/friendlier.

And these take a bunch of steps to make.

It’d be a significant time-saver and perhaps stimulate thinking for more macro scenarios if there was a feature in KM that allowed for say 15 characters to be set and used as an icon for macros. The ‘icon text editor’ might allow for typeface, size, bolding (or weight), manual wrapping to a new line, and text and background color.

Finally, these internally generated icons (ticons?) could have their own section in the icon chooser for reuse.

To save steps, I do have palette styles set to show text only and therefore display as what is listed in the macro's name. These are great for many things such as text or character fills: 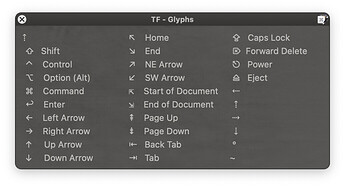 Etcetera. AND take an extra click to evoke, don't allow mixing text and purely graphic icons within the same palette such as: 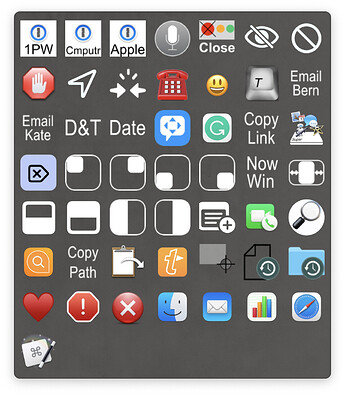 And are even more difficult/limited to organize the resulting palette in a visually useful and pleasing way.

For completeness, there is also combining text AND graphics:

For even more elegance/usefulness but that asking for a full graphic program built in. Maybe a later request and I'm not holding my breath

There are so many available options for creating images/text-images that I really doubt @peternlewis would invest time in any kind of editor, but you never know until you ask.

You can create your icon in any image editor (probably use 64x64 size, so the icon is relatively small).

I doubt I'll add longer text icons - for one thing the Icon Chooser cannot have focus for a variety of technical reasons which makes typing in a longer text impossible.