Pallete shortcuts takeover the keyboard keys even after it launches..cant manage to debug this

I have assigned a keyboard shortcut Shift-C-O-Command (hyper)-A in almost every app i use so this will launch a app specific pallet: 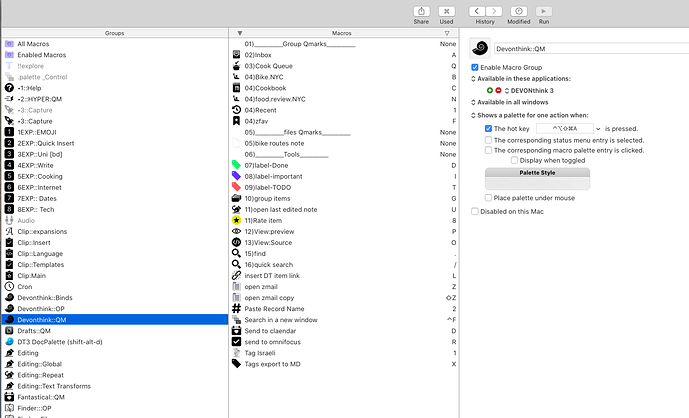 this works as expected BUT often after i launch the pallete and select a key, the GUI of the pallete disappears but all the hotkeys are still 'sticky' that is t doesn’t input t but rather launches the pallete shortcut

can any one help out and stir me in the right direction? For the life of me i cant figure this one out and its making using KM unusable for the first time

thx a lot in advance

I've experienced similar. In the most common (maybe only) scenario for me, I invoke a Safari-only palette for opening specific sites. I press F2, palette comes up, then I press a letter or number to open a specific site. Nice and easy.

However, if instead of selecting a site from the palette, I use a hot key to switch to a different application, upon returning to Safari I get the behavior you described, whereby "the hotkeys are still 'sticky' that is t doesn’t input t but rather launches the pallete shortcut."

I discussed this by email with @peternlewis some months ago—after many months of me trying to understand what causes the hiccup before broaching the topic. My memory is that he said such a thing shouldn't be happening, but I don't believe we ever got to a cause of the problem.

Of course, we may be seeing similar behavior but you'll have to test to determine if what elicits the problem is also similar. Even if it is, I don't have a long-term solution to provide. The closest I can come is the macro I run to quit and relaunch the Keyboard Maestro Engine, thus putting an end to the hiccup. 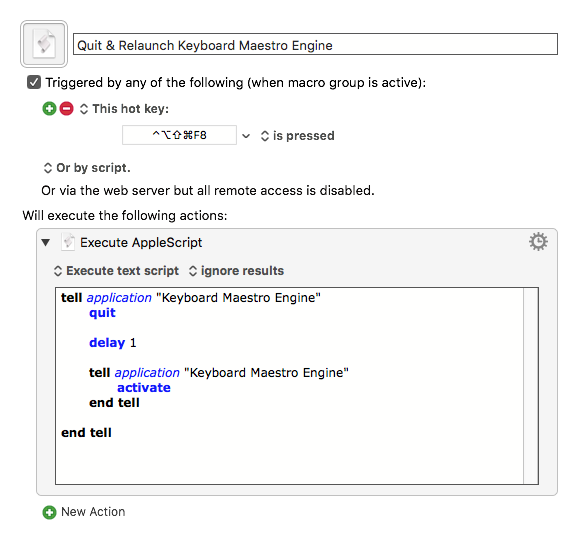 thx @NaOH for the response, this is exactly what happens here and in fact it happens most of the times in safari as well (where i have a similar macro to launch sites):

Would be great if @peternlewis could jump on to the conversation and give us his thoughts on how we can perhaps debug this (without killing the KM engine each time :))

Is this after the conflict palette appears? If so it should be resolved in the next version.

Is this after the conflict palette appears?

In my cases there is no conflict palette presented. (1)A Safari-only palette is invoked, (2)instead I go to another application (without dismissing the palette with the mouse or Escape), and (3)upon returning to Safari the triggers for the prior palette (in 1) are invoked once I type in Safari (e.g., if I type a URL).

Hi and thx for the response @peternlewis

i have exactly the same issue 1:1 as @NaOH (ie it happens on non conflict palettes). Sometimes it happens every if i don't change to another app as well (ie just launch the macro pallete, then cant type a ie in an app since a is a macro shortcut in the pallete i just launched)

thx for looking into this!

If it matters, that's going to another application using a Keyboard Maestro Hot Key. If it also happens using Command-Tab, I haven't noticed.

this works as expected BUT often after i launch the pallete and select a key, the GUI of the pallete disappears but all the hotkeys are still 'sticky' that is t doesn’t input t but rather launches the pallete shortcut

If you can find a repeatable way to cause this then I can look in to what might be happening.

Ideally, find a repeatable way to cause this, and then duplicate your macro group, change the hot key so it doesn't conflict, remove anything unnecessary, remove all the actions from all the macros, and post it here with instructions on how to duplicate it.

Here it is from my system. Both macro groups are disabled.

While in Safari, activate the Demo Safari Site Selector Macro Group and a palette will pop up to select a site. While the palette is showing, use one of the Hot Key triggers from the Demo App Launchers Macro Group to activate an app other than Safari.

As expected, the app you selected will open. Use the mouse or Command-Tab to switch back to Safari.

With Safari frontmost again, simply press the key(s) for any of the Demo Safari Site Selector Macro Group triggers. As it's been uploaded here, that would be B, K, M, or T. The site associated with each of those letters will open.

Should be resolved for the next version.