How to Reverse Characters in a Variable

Hi - I know this is likely a very simple solution, but when searching here I could only find "reverse words in a string", whereas I'm looking for a much simpler "reverse characters in a variable" function.

Many thanks in advance. 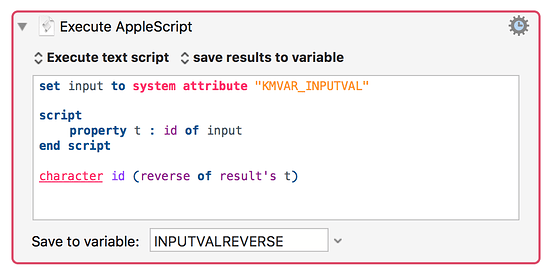 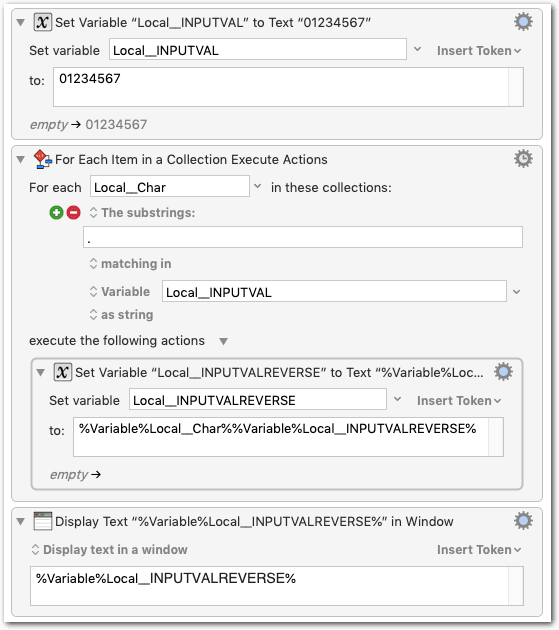 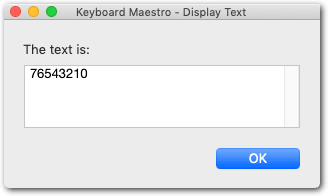 (If you need global variables, just remove the “Local__” from each instance.)

Guys, this is just what I need. I was looking online at ways to do it in javascript - but it was going over my head and couldn’t get it to work even when passing the KME variable. This is great though, both approaches work well. Many thanks.

I was looking online at ways to do it in javascript -

Here's the basic JXA/JavaScript solution. Of course you will need to add the call to the KM app to get the KM variable.

Imagine we have a km variable called activeLang

If you only have singlebyte characters in your input (for example [a-z][A-Z][0-9]) you can also get away with a very nice and short Perl solution: 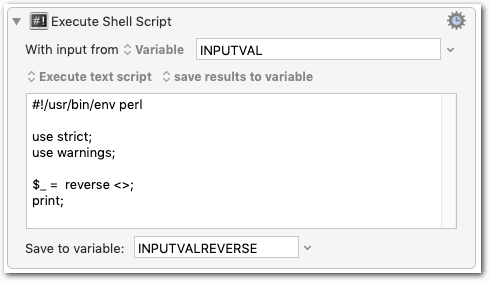 Or as a command-line one-liner:

[Skip the rest of this post if you are not interested in reversing any kind of UTF characters.]

The pitfall (or: “what I have learned today

) is that this fails to a different degree if the string contains multibyte UTF characters like ä, é, ợ, đ etc.

For the more simple things like Käse, résumé etc. it seems to be sufficient to explicitly set the stdin mode to “utf8” with

With this modification, the Perl script from above produces correctly esäK and émusér.

But with more “sophisticated” strings like Rượu đế this is not enough.

So far the only solutions I have found to work with any kind of strings are these:

2) — Or using the Unicode::GCString module and reversing the result as list:

As test case I have used the nice Vietnamese word Rượu đế, found in a related discussion on perlmonks.org.

If you want to try the scripts above:

All the scripts are written to be used in a KM Shell Script action with input from a variable (stdin), as shown in the screenshot at the top.
You should also set the output to a (non-local) variable, because the KM Shell Script Results window doesn’t show all characters correctly. (At least on my computer.)

If you want to test a script with the Vietnamese test string, you have to copy it from the following line (do not copy one of the inline instances in the text!) :

Although the string looks different here, this will maintain the original composition of the characters. Once you paste the string into a Unicode-compliant editor (and using a compliant font) on your computer it will again look like “ Rượu đế ”, but with the correct composition.

Alternatively you can copy the string from inside this macro.

But lets give the newbies something a little more approachable.

I see your point, and I think I just copied and pasted it at the time from the AppleScript libraries I’m writing, and happened to be updating my _Text library.

When stored as a handler, the reason why I elect for my method over the more obvious is because it avoids any possible interactions with text item delimiters.

So, whilst it appears mildly absurd in this context, there was reason behind the madness.

But lets give the newbies something a little more approachable.

Even if it was not your intention, your solution has another advantage: Besides the two Perl scripts from the second part of my post above, it is the only solution on this thread that works correctly with my test string from above. (Rượu đế --> ếđ uợưR)

the reason why I elect for my method over the more obvious is because it avoids any possible interactions with text item delimiters .

Yes, I know. But this wouldn't be:

But this wouldn't be:

Even so – esoterica doesn't really have an advantage over meat and potatoes in this case.

I haven't seen an AppleScriptObjC method for doing this. Have you?

esoterica doesn't really have an advantage over meat and potatoes in this case.

Totally agree, and I endorse your solution over mine, both for simplicity and, as @Tom stated, for the fact that you were wise enough to use getvariable, which handles diacritics with ease. I wasn't trying to be a smart ass with my 5-course dinner of an AppleScript. It just coincided with the moment I happened to be writing a handler that did that particular text transformation. I actually believe simplicity is generally better for several reasons, unless there's a specific reason to employ more obscure methods. I remember deleting a post of mine off this forum because I went back to read the AppleScript I had supplied and, although ti worked, I was disgusted with myself for how obnoxiously opaque the whole thing was for no good reason.

I haven't seen an AppleScriptObjC method for doing this. Have you?

Not a builtin method, but I've no doubt you already thought of this:

Hmm... That method is fully unicode compliment, and it's actually a bit faster than decomposing the characters and using AppleScript's text item delimiters.

Okay, you've got a winner.

Not a builtin method, but I've no doubt you already thought of this:

I knew Shane's BridgePlus library had such a method, so I was afraid that Objective C lacked one.

On my machine, it isn’t.

It works correctly with the “simple” kind of strings like résumé, but fails with the Rượu đế test string from above. (The diacritics ́̂ and ̛̣ get detached from the letters they belong to.)

(The AppleScriptObjC method works correctly with all.)

‌
For ease of testing, here a macro with all posted solutions so far:

As said, for display I’m using the variables window, because the font (Menlo) used in the KM Shell Script Results window cannot handle all characters correctly.

The colors of the actions reflect the grade of Unicode compliance of the script:

The green actions should produce this result:

For ease of testing, here a macro with all posted solutions so far:

Thanks for sharing, Tom. This is a very useful tool.

From my perspective, I prefer Chris' (@ccstone) AppleScript to be the best for all of my use cases:

It is fast and seems to work with all unicode characters. We shouldn't be afraid to use AppleScript Text Item Delimiters (TID), just learn how to use them properly, always setting and restoring.
I find that encapsulating TID in a handler, like Chris did, easily removes any issue with using TID.

BTW, it is very disappointing the ASObjC does not offer a native reverse() function for a string. Since using it also requires set/restore of TID, I see no advantage in using it.

but fails with the Rượu đế test string from above. (The diacritics ́̂ and ̛̣ get detached from the letters they belong to.)

Assuming I know what it means for a diacritic to become detached, then I don't see this happening in my testing. As far as I can tell, the handler I gave to @ccstone handles the string you supplied correctly: 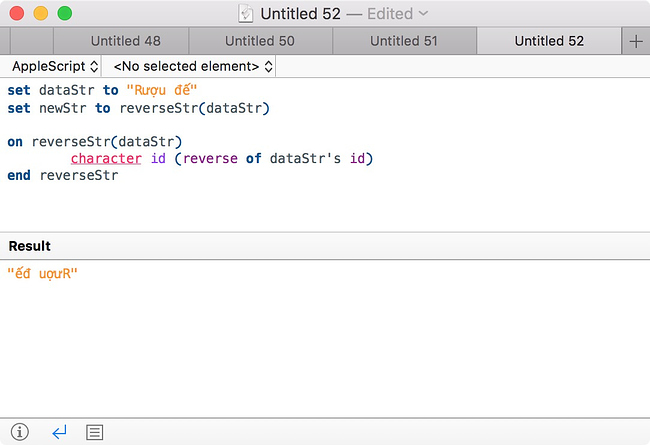 The AppleScriptObjC method works correctly with all.

I agree with @JMichaelTX, in that the fact one still needs to be mindful of the text item delimiters does take away from both the appeal and the simplicity of implementing it. There's also the overhead of using ASObjC methods, but if the rest of the script is already using them, that's less of a concern. However, I wonder whether it brings with it any actual performance benefits. My gut feeling is that, particularly for more commonly-sized strings that most scripts are likely to handle, vanilla AppleScript is going to be faster than ASObjC.

It is fast and seems to work with all unicode characters.

@ccstone said my alternative method was a tad faster, which makes sense just from the number of operations each method is performing. But I'll wait to hear back from @Tom with advice on how to reproduce the error he's seeing, as I'm not getting the same result.

@Tom, just to clarify, are you still utilising the macro code I posted in the first instance ? That one did indeed have an issue with those special characters, although that was down to my whimsical choice to use system attributes to read the value of a Keyboard Maestro variable, rather than tell app "Keyboard Maestro Engine"....

I really like this communal debugging and swapping of ideas and different methodologies. I wish there were more of this somewhere. The Latenight Forum is a good place for educational tips, but doesn't have this feel of collaboration that occurs more often in this forum.

On a parting note, if you wish to circumvent the text item delimiters, you can opt to coerce, for example, the ASObjC's Cocoa object to a linked list instead of a list, i.e.:

That way, the subsequent coercion to text concatenates the list items without using a delimiter. This method applies equally to lists created from exploding a string into its characters: