Trigger | Converting any key like the function of shift key

Is that possible to make a combination hot key that acts like a shift key, control key, or command key?
I want to hold a key and press another key.
Example:
Q+1
A+1

I'm not sure that either the question, or the examples, are intelligible yet.

To get any help, you would need to provide more (and broader) context about what you are hoping to achieve, enabling us to understand what you are talking about.

Tip: How Do I Get The Best Answer in the Shortest Time? Tips & Tutorials

Tip: How Do I Get The Best Answer in the Shortest Time? TLDR: The better, the more complete, info you post about your problem, the quicker we can get you a good answer. Show us what you want, in addition to short descriptions. Give a real-world sample of your input data, Show your desired output. Post/upload your macro or script if you are asking questions about it, even if it does not currently work. Don't just tell us "it doesn't work." Tell us specifically what it is doing wrong, how it …

No idea yet what the meaning, context, or use of your "Q+1, A+1" is, but I wonder if there is a problem which you are hoping to solve with a key down condition ?

Thanks! Sorry that I didn't describe my problem well.
I already defined combination shortcuts of Shift, Fn, Contol, and command keys with number keys.

I needed another key so I can combine that with the number keys. 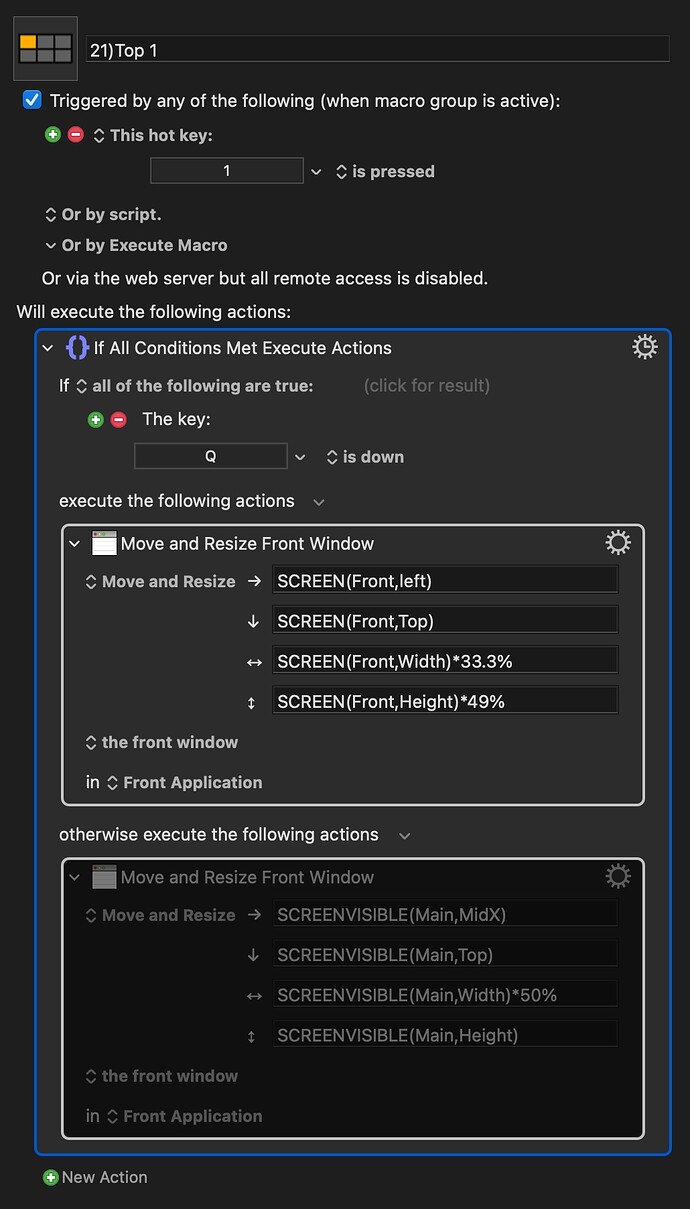 This works for me:

NB: If Q is also assigned as shortcut, both things will happen. I'm not aware of a workaround, I'm afraid, which may leave this idea a bit defunct.

I needed another key so I can combine that with the number keys.

The big problem with this idea is that the keys that are not Modifier keys have a primary use to simply type the symbol they represent. That's why they don't behave like Modifier keys. Holding down Q will type a line of Qs.

In case it's helpful, there was this post recently about finding what combinations of keys you might still have left to play with:

Easy to forget, when choosing a macro-launching hot-key, that there are 15 possible combinations of modifier keys: ⌃, ⌥, ⇧, ⌘, ⌃⌥, ⌃⇧, ⌃⌘, ⌥⇧, ⌥⌘, ⇧⌘, ⌃⌥⇧, ⌃⌥⌘, ⌃⇧⌘, ⌥⇧⌘, ⌃⌥⇧⌘ Which ones am I overlooking or under-using ? Here's a macro which shows the stats of your Keyboard Maestro hot-key modifier usage. In my case for example, ⌥⇧ and ⌃⇧⌘ both seem to be blind spots, and some others are not much used: [Screenshot 2022-04-29 at 20.46.12] Underused key combinations ? KM hot-key modifier st…

I have to say, I agree with @Zabobon. Solutions to this kind of thing throw up as many issues as they solve. They may be acceptable to you, but I tend to avoid them.

Palettes are a great solution if you're struggling to remember (or come up with) hotkeys. Personally, I opted to buy a Stream Deck and never looked back.

Holding down Q will type a line of Qs.

Not anymore. Apple changed this years ago. Q (or any other letter) is typed only once, just try it out.

Not anymore. Apple changed this years ago. Q (or any other letter) is typed only once, just try it out.

Yes, you're right! I suppose I just assumed it still did that after years of not simply holding down a letter key in case that happened

But I still think it's only going to lead to problems trying to force keys that are meant to type letters to act as modifier keys.

In order to get that to work there has to be some condition that checks if the curser is in a text field or not or follow with a delete of the typed letter and every time I've tried to get these systems to work in KM, I've ended up giving up as there's always an unforeseen consequence.

Many Apps use letter keys to invoke states of things (like "V" in Final Cut Pro to make a selection active or not) but that stuff is built into the App at some fundamental level.

But I still think it's only going to lead to problems trying to force keys that are meant to type letters to act as modifier keys.

Sure, that's right. With KM, anyway. But there are other apps that allow, for example, to use the spacebar safely as a "modifier". So, Spacebar (down), Q (down, up), Spacebar (up). Very useful

Not anymore. Apple changed this years ago.

Ah. Interesting. Letter keys don't repeat when held down but all symbols keys do. Like $$$$$$ for example. I've learnt something today.

I'm glad to hear that, since I don't know even a small part of what you know about KM :-). Only "special keys" repeat. Spacebar, Enter, Backspace, Arrows, Tab and a few others, but not letters.

I'm on Catalina and keys repeat, so are you talking about post-Catalina?

Apple changed this years ago.

That setting is still here in Monterey.

But the actual behaviour that @Frankb pointed out to me is correct (at least in Monterey). Letter keys do not repeat if held down. Some symbol keys do repeat when held down.

I have nothing to add

Looks to be optional, no?

How to enable key repeats on your Mac

Learn how to enable key repeat on Mac to take control and change the behavior of long key presses to accommodate your needs.

Looks to be optional, no?

The behaviour affects how typing letters works in text fields. If the “a” key is held down when typing some text you don’t get aaaaaaaa. But you can still type aaaaaaaa by tapping the “a” key the number of times you want. I hadn’t noticed it worked this way until it was pointed out. It seems fine to me.

A bonus is that now holding down say, “e” will invoke a pop up choice of ë è ë etc (just like on an iPhone). This might be why it’s been done.

Now that I know (in Monterey) that holding down "e" brings up a list of options rather than typing a long row of eeeee's it seems like a good feature. But the funny thing is I would probably not have stumbled across it without this discussion here, because who would try typing multiple letters by risking just holding down a key in a text field (apart from when my dog leans his chin on my laptop keyboard)?

That's why this feels to me like it's been implemented to get the Mac keyboard to behave more like the iPhone keyboard where holding on a letter brings up alternatives.