Typinator is a great complimentary tool to Keyboard Maestro.

Version 7 was just released, and, while I haven't upgraded yet, it looks to be a huge update that I look forward to.

Typinator 7 comes packed with more than 40 new features and improvements. The changes do not only affect the big "power features", but also many places in the user interface of Typinator.

If you purchased a license for Typinator 6.x on or after January 1st 2016, we are making the major new version 7 available to you for free. No purchase is required - your license key covers Typinator 7.0 and all further minor 7.x updates. Just download the new version and enjoy.

For reasons to use Typinator in addition to Keyboard Maestro, see the "Solution" posted by @ccstone.

Great updates and well worth the money. That describes both Keyboard Maestro and Typinator!

Love when companies do this. January feels more than generous. I just bought in this month so I am doubly glad.

May I ask for some of your thoughtful curating about Typinator, specifically as a compliment to KM.

For someone already using KM, why would they want to add Typinator?
What can Typinator do that KM does not do?

Thank you for any comments about this.

For someone already using KM, why would they want to add Typinator?What can Typinator do that KM does not do?

Mark, the best way for me to communicate that is to point you to the Typinator web site, where you can get a quick understanding of its features.

Keyboard Maestro can definitely provide the text expansion function, and it may be all that some users need. However, if you have lots of text expansion snippets (> 1,000), then you may find Typinator a better tool to use and manage these.

I should also note that I use KM for a number of complex text expansions, that require RegEx and/or scripting.

Chris Stone (@ccstone), one of the long-time KM masters and advocates, also suggests using Typinator for certain classes of use cases. Hopefully Chris will jump in here, and provide his thoughts on Typinator.

Time and aggravation of learning something new is the problem.

I totally get that, and have the same concern.

However, I have evolved my Mac tools down to these, all of which I feel are indispensable for my workflows:

I’m still learning how to best use all of these, in particular the last two.

If you're just a casual user of snippets then there is little benefit to using a dedicated snippet manager – Keyboard Maestro is no slouch...

However. Typinator eats Keyboard Maestro's lunch in both snippet usage and management – so – if you're a really heavy user of snippets (as I am) it's a no-brainer to have a dedicated utility fine-tuned for the job. (I currently have about 50,000 snippets, although many of those are spelling corrections).

As of today I have 75 different sets of snippets in Typinator.

I've been using snippet-expansion utilities since TypeIt4Me came out in 1990. It went through a fallow period several years ago, and I used TextExpander for a while. TextExpander was too buggy, had a poor search (at the time), and I had several bad experiences when communicating with its developers.

One day I was fussing about having too many snippets to remember, and I discovered Typinator with its excellent Quick Search. After 10 minutes usage I bought a copy and have been a pretty happy user ever since. The developers are quite responsive and have implemented a number of my ideas and requests over the last seven or eight years.

I would feel almost as lost without Typinator as I would without Keyboard Maestro (almost).

But as I mentioned – I'm a heavy snippet-user.

Typinator types text for you

Insert words, sentences, or even entire paragraphs by just typing a few characters... Typinator expands it for you. Test Typinator now for free.

The website covers much more of Typinator's functionality than I have above.

The only way I’d ever understand how you use them is if I could watch over your shoulder for awhile. It just seems incomprehensible to me!

Figure somewhere around 45K are auto-corrections for spelling errors, and it might be easier.

Figure somewhere around 45K are auto-corrections for spelling errors, and it might be easier.

Dan, I think you make a typo there. Didn’t you mean:

I think I may know at least 45 cuss words, so there’s that…

I’m torn. I love Typinator, and use it many times every single day, but I don’t think I’ll upgrade. I upgraded with no hesitation when v6.0 came out because I value it so much, but I don’t think I’m really getting the power use out of it that I should. I probably could have stuck with v5.0, for that matter…

I am trying to see if KM will do the job now… I can always upgrade later. Or just go back to v6.x if I really don’t need the new features.

I can do each of these in KM, without much effort. I don’t have a huge amount of these, though, so maybe Typinator is better at volume. I like the popup forms in KM a little better - at least in Typinator 6.x

KM is no slouch for this either!

One thing that might be a key feature is rich text expansions in Typinator. I have one snippet that explains in detail a feature of software to our clients that uses a few paragraphs and about 5 screenshots. Not sure if KM will do that.

I have one snippet that explains in detail a feature of software to our clients that uses a few paragraphs and about 5 screenshots. Not sure if KM will do that.

KM can probably handle that.
You can paste rich text and images into a Display text in a window Action.

I think it's generally easier to run Automation JavaScript from Keyboard Maestro,
but it may be worth knowing that the "JavaScript" of Typinator inline scripts has access to the Automation object, so for a snippet that pasted the active URL of Chrome, for example, you could, if you wanted, write: 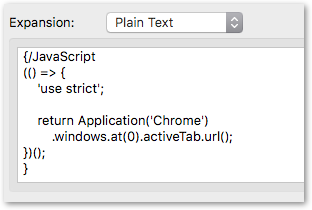 (I personally use Typinator mostly for plain snippets, and KM for everything else)

Thank you @JMichaelTX and @ComplexPoint for helpful comments about Typinator.

After reading your comparisons, I understand the differences.
Since I have only a few dozen text expansions, KM handles that just fine.

Thanks all for the discussion!

BTW, I just noticed that Typinator is from Ergonis Software. That name sounds familiar… Oh, they make KeyCue, which I bought, use, and highly recommend. When you hold down the Command key, KeyCue displays all the currently available keyboard shortcuts.

I found the same. Last time I tested, Typinator was the quickest of all of the expansion tools I tried.

I am at the opposite end of the scale to you. I would say I was a power user but just barely. I am down to a similar set: I really streamlined recently. However my set is similar to yours along, of course, with native apps. Launchbar, Keyboard Maestro and keycue to help me with learning snippets. I appreciate the reasons for a dedicated text expander, but I really don't have enough, only about ten at present: I never think I will exeed 100, I use spell checks for typos really too.

I dropped textexpander, I quit it a few months ago, it is still there but I won't renew the licence, I have Karabiner for the hyper key, nothing else. I also use DEVONthink and Ulysses for everything nearly now and LaTeX suite with texpad. I keep a couple of things to write on. Mellel for example, I will see how long I keep them

I dropped textexpander, I quit it a few months ago, it is still there but I won't renew the licence

Here are a few examples:

Create phone notes and save in DEVONthink:

My mails with the help of TextExpander:

This is how I write and create letters: