There isn't a megathread on Logic Pro macros, so I thought I'd start one. Here are those of mine which I think might be useful to most people. Please feel free to add your own!

After installing any of these, pay attention to any green actions.

NB: These all work for me, but you may need to tweak them to work with your own setup, depending on screen configuration, software versions, etc. Basic familiarity with KM will be very helpful. I've now upgraded to Monterey, and I constantly tweak my Logic macros, so the versions uploaded here may not be up-to-date. If you like the idea of a macro but, for example, the AppleScript isn't working because you're on v10.7 onward, comment below and I'll update it for you.

Do you ALSO have a Stream Deck? If so...

First off, get the KM Link Stream Deck plugin if you don't already have it. You will use this plugin to select the macros below. The important differences between this and the bundled KM plugin are:

Example Profile.streamDeckProfile.zip (150.6 KB)
Now import this profile using the Stream Deck app. It contains folders and buttons pertaining to the following macros, which you can then copy to your own Logic profile... if you like them.

Do you ALSO use PlugSearch? If not, you should! If you do...

NB: The latest version of PlugSearch brilliantly allows you to load favourite plugins via Midi. This will be enough for the needs of most people, but if you want options...

In PlugSearch prefs, I have Universal set to ctrl+§ and Instrument set to alt+§. If you don't want to use these keystrokes, you will need to replace them within the macros. They're marked out in green for you to see easily.

Vocalign Auto.kmmacros (82.0 KB)
Prompts for number of tracks to sync to the the Master Track, and automates the entire process.

I'd like to direct you to another post I've made about triggering Stream Deck profiles for Logic plugins. It's too involved to add here.

I hope you found something useful here. I've put in the hours and got these all working reliably on my system. Some of them use found images, so they may need some modification, depending on your screen resolution. It should be self-evident which images need to be captured, but let me know if you need clarification. If any of these don't work for you, it may be due to the configuration of your screens differing from mine. In that case, you may also need to go through the offending macro and check that it's searching for images in the correct screen.

At the very least, I hope they can act as starting points to be adapted to fit your needs. I've tried to make them as easy to understand and customise as possible, so I can't see why they wouldn't work for you too!

Hi,
that’s really a great collection of Macros for Logic ProX!
I would like to use a few, but couldn’t figure out which Set of KeyCommands in Logic are used. Can you export your Set so I can find out which are used in your macros an adopt to my Set?
Thanks - Herbert

Sure, here you go

Excellent thread!. Will add some of my own soon.

These are great. I hope you keep them updated. I'm using the PlugSearch + StreamDeck macros already

It's taking a little more to get others working. For example, to get pre-fader freeze working I had to replace with my own screenshots and set the search area back to Front Window.

Yeah, these are likely to require a bit of finessing according to your screen configuration and which version of Logic you're on. I'm still on 10.6.3, so icon images will need to be re-grabbed if you're on 10.7.x. Hopefully what I've offered up is still helpful despite that. I've actually replaced a few found image conditions with UI scripting, but I'm hesitant to post them here as they're trickier to adapt to your own setup if they don't work for you.

They’re more than a little helpful, thanks so much again!

I’d also like to make them image-less where possible.

As an example, Pre-Fader on a Software Instrument and Audio Track gave me different values. (Nevermind why you'd want to do this on an audio track)

I also tried the record function on Keysmith which came up with a macro to click 'Pre-Fader' that worked on both kinds of track.

So it's finding the menu item in a more flexible way. And I'm not sure how to do this in AppleScript or KM.

Yeah this is why I still use found image for selecting pre-fader freeze. It's actually pretty snappy so I'm not too worried about it. Interesting that Keysmith can click it consistently though; I wonder how it's doing that. Does it work regardless of whether you move/resize the window or if the 'More' button under the Region inspector is open/closed? I don't feel like I need another piece of software running all the time, so I don't think I'll investigate it for now, but I'd love to know what it's doing.

No, it won't recognise if Region is closed, but it will work wherever it is on the screen. The record function sees which UI elements you click rather than mouse location.

It makes some of the existing macros incredibly simple, like opening the library, clicking the search bar, pasting and clicking the result. Also just about worked for clicking a colour. But there's no variables either, so you'd have to record that over and over.

It's pretty magic but I also wish I could do it without another piece of software running, as I already have all the automation apps running.

I meant when you close the "More" box, thereby changing the item position onscreen but it seems it will work anyway. Impressive. I'd love to know how it's doing it. Presumably it doesn't have an option to spit out a script so it must be doing some clever stuff behind the scenes. Must admit I'm tempted.

It seems to find it pretty reliably. The pitfall is it will find the menu 'Pre Fader' reliably but then you need a separate macro to find 'Source Only'. On something like Flex Mode though it will always find the flex menu, no matter what is selected, as long as it's visible.

This is quite a basic one but it sets Logic's Buffer Size to a value passed through Stream Deck.

@noisneil Did you ever manage to use a menu condition to determine, for example, if the Library is open. I found that KM says 'Show Library' and 'Hide Library' both exist at the same time.

I have a similar macro. Only difference is the end is a bit simpler, as pressing apply before closing the window isn't required.

For the Library, I just use this: 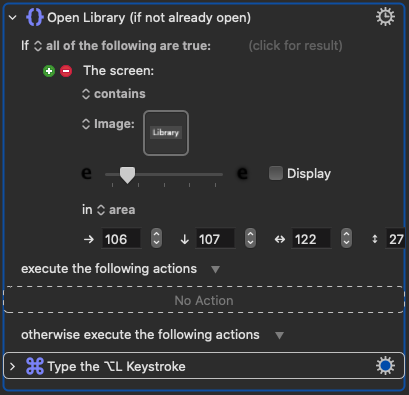 I may switch to using Keysmith for anything to do with the Library, as it seems a bit snappier, but I'm not sure I want yet another piece of software running all the time in the background.

You're right. I just tested and it is an unnecessary step.

For the Library my idea was a menu condition, if 'Hide Library Exists' then the library should be there. But it hasn't been working as expected.

The menu item seems only to be updated once you open the View menu. I just tried manually scripting it and got the same result. This is why I opted for the found image condition.

If you prefer not to use found images, you could use this, with the action set to return to a variable:

If you checked this list a while back, I've added a few. Here are some recent additions:

Again, if anyone has suggestions on how to improve these, please let me know!

Ok Noisneil wow amazing job.
I had no idea anyone else was working on this until just now!! Gonna dig into what I've done and see if there's anything that would be useful to you or anyone else.

Hi, I tried some of the macros but they didn't work on my system ...
fe the strip macro stopped here : "Macro Cancelled
Move or Click Mouse no unique image
found. Macro "Strip" cancelled (while
executing Move and Click at (0,18) from
the Center of the Found Image)."

Am I supposed to change mouse settings or is it a Logic Version issue.
Would love to use your macros, the seem to be quite helpful. MY Logic Version is 10.7.4
kind regards, Jens Oettrich